It’s easy to see where early settlers through Nebraska came up with name, “toadstools,” to describe the formations in what’s now Toadstool Geologic Park. They do indeed look like rocky stems with caps on top! Plus, the color isn’t far off either, as the sandstone slabs have a similar creamy color.

Toadstool Geologic Park is one of a number of National Parks in the U.S. that highlight and preserve America’s rich geological history — this one just happens to include the term in its official name. However, even if you’ve never been interested in geology, you’ll find hiking at Toadstool a fascinating adventure.

What’s in this article?

How to Plan Your Hike Into Toadstool Geologic Park 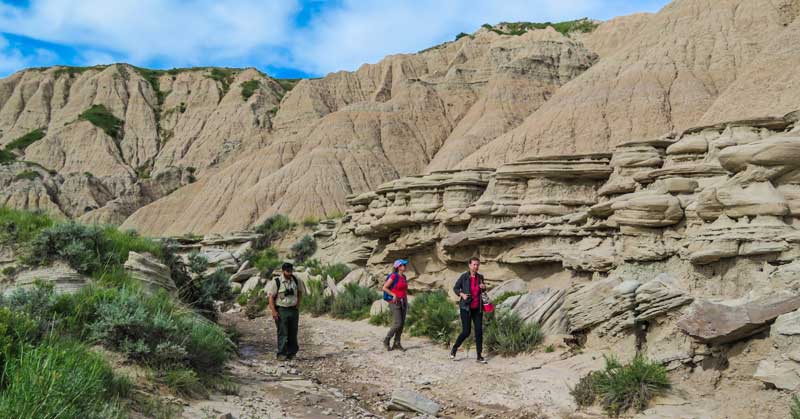 Park ranger with hikers in Toadstool Geologic Park in Nebraska.

There are a couple of ways to start your hike into Toadstool Geologic Park. On my adventure, I left from the Hudson-Meng Education and Research Center and ended up at Toadstool Campground. However, you can also do it the other way around. You’ll find parking available in both spots.

Be well prepared if it’s a hot day. The hike from Hudsen Meng to the campground is three miles one way and there aren’t any trees for shade! When you start from the campground, however, you’ll find three trailheads to follow. 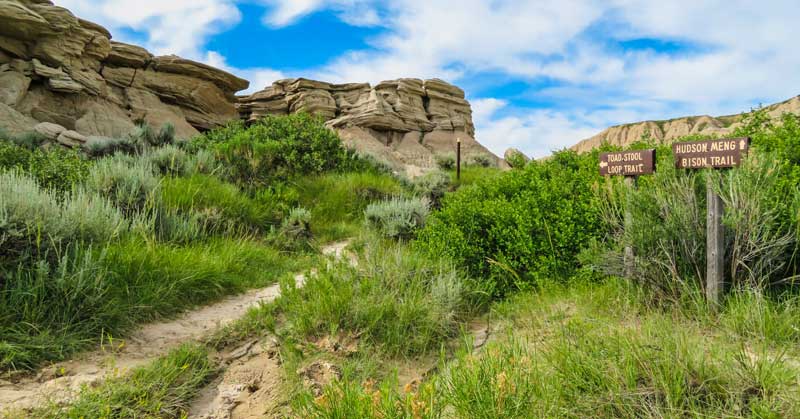 The one-mile loop gives you some great examples of the formations if you have time or energy limitations. 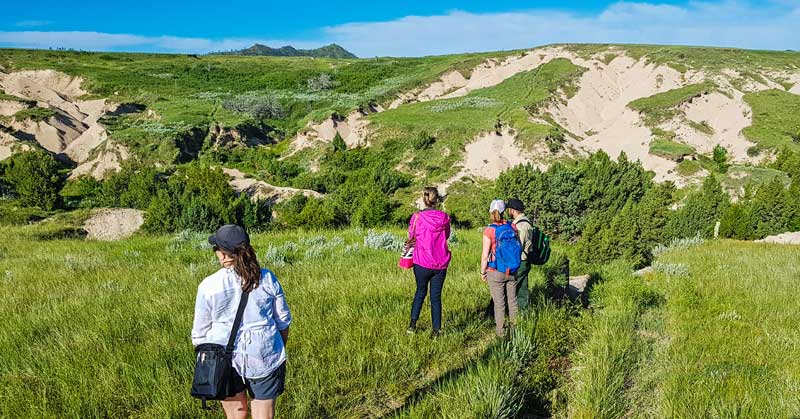 Hikers getting ready to leave the grassy plains to explore the badlands.

Leaving Hudson-Meng, the Great Plains Trail intersects with the 918 road and takes you through the grasslands and into the badlands. Once you close the gate behind you, it’s on to experience what settlers on the great Western migrations of the late 1800s would have found.

The landscape starts out on an a plain of blue grama, green needlegrass and western wheatgrass under endless skies. Before long, though, you start down into the badlands. Formed over millions of years, the badlands are rather like an elaborate layer cake ripped open to examine the contents. Indeed, the stratigraphic layers at Toadstool are evidence of various environmental changes in the area ranging from humid forested floodplains to semi-arid desert conditions.

For hikers though, it’s all about finding your way down, down, down into the treasure trove of things to see in the streambeds and canyons and gullies.

Geology of the Formations in Toadstool Geologic Park 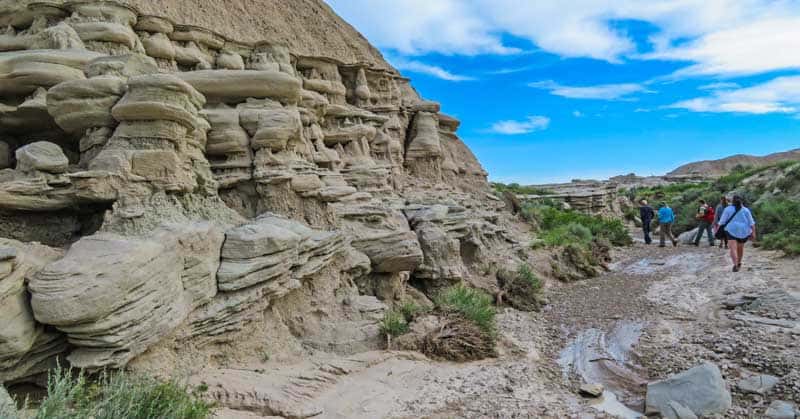 Thirty million years ago Toadstool Geologic Park was a busy place! A broad, though shallow, river wandered through what was a hot and muggy environment — in fact, the morning I hiked it, I didn’t have to use much imagination to turn back the clock.

A number of animals, now gone except for their footprints and bones, roamed at will: miniature horses, camels with no humps, giant tortoises, pigs, even ancient rhinoceroses. If you keep your eyes open, you’ll find lots of evidence to show they’ve crossed this way.

The biggest clue is what looks like pocks or holes in the rocks. However, they’re not a form of erosion, as you might expect. How can scientists be sure? Well, they’re clearly toe tracks pointing in the direction of travel. And the size and depth of the tracks show the scientists how big the animals were and often, what type of animals made them. 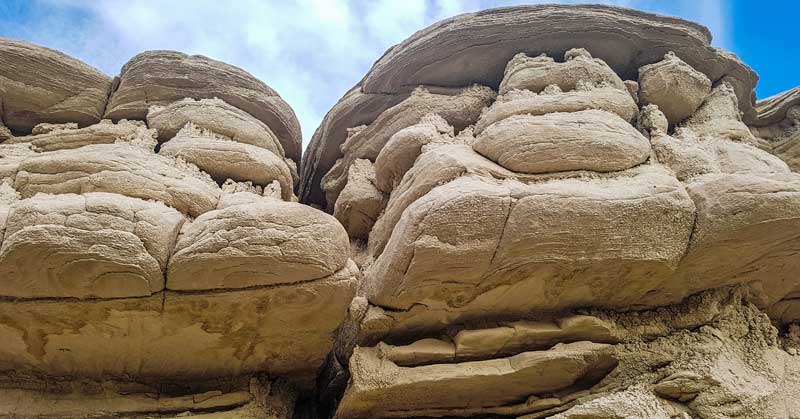 Formations overhead in Toadstool Geologic Park could almost be the distorted faces of alien creatures peering down on hikers.

You’ll also see both claystone (lighter colored) and sandstone in the rock layers. Of these, the sandstone was once a sand bar in the river, where creatures walked. Many of their tracks, such as the webbed feet of prehistoric ducks, remain today, preserved as the sand dried out.

During my hike, I truly wondered if some of the creatures were still wandering the park — or at least their ghosts — as I heard an overhead noise that came and went. Curious, I kept my eyes riveted to the canyon tops. Eventually, I discovered it wasn’t history in action, but the future, as a drone criss-crossed the ancient riverbeds where I walked, it’s pilot out of sight! 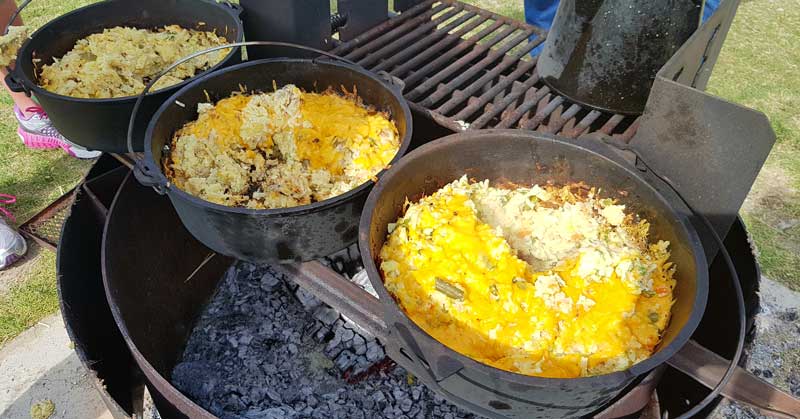 Whether you start or end in Toadstool Campground, it’s an important stop on your hike. Here, you’ll find basic facilities, such as vault toilets and some picnic tables to relax over a cold drink (bring your own though, as there’s no water) and maybe a meal.

Our group went all out with the upright grills, so we had a full meal!

Remember to pack out everything you pack in, both to the campground and the park. Also, whatever fossilized remains you find in the park must stay in the park, as they’re protected by Federal laws. There are six primitive campsites if you want to spend longer exploring Toadstool. 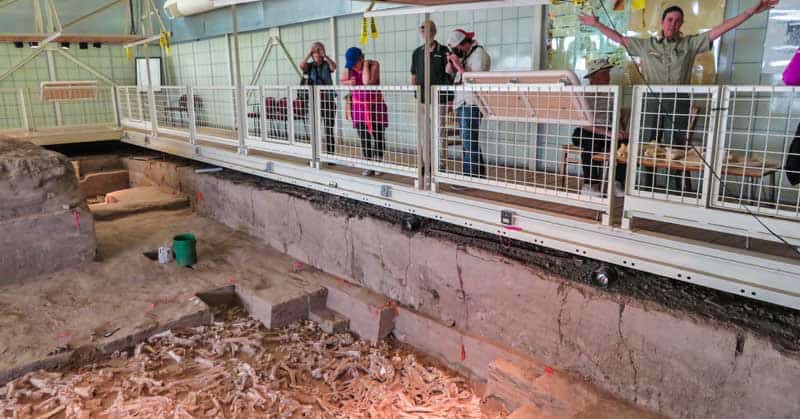 Park Ranger telling visitors about the Hudson-Meng Bonebed in Nebraska.

I started my hiking adventure in Toadstool Geologic Park from the Hudson-Meng Education & Research Center, however, you can visit without planning to hike. Hudson-Meng is an ongoing archaeological excavation that started in the 1970s to test bison bone deposits. Informational wall boards tell the remarkable story of its development and what has been discovered. When I was in about 9th grade, I’d planned to become an archaeologist, so I found it all fascinating.

But what is the Hudson-Meng bonebed? Well, around 9500 years ago, a single catastrophic event caught about 600 bison by surprise. Now, their bones are left in a bed about the size of football field to tell their story. Inside the visitor’s center at Hudson-Meng, you can see an actual section of the dig. Or, you can follow the wheelchair accessible trail 1/8 mile to the bonebed.

This video from the Forest Service tells the whole story!

For help planning your visit to Toadstool Geologic Park visit the USDA website at: https://www.fs.usda.gov/

I visited Toadstool Geologic Park as part of a FAM trip hosted by Nebraska Tourism. As always, I retain full editorial control of any articles I write after participating in a hosted tour, so my experiences and opinions haven’t been influenced by my hosts.

The photo in the header above was taken by Linda Aksomitis in Toadstool Geologic Park in Nebraska, USA. 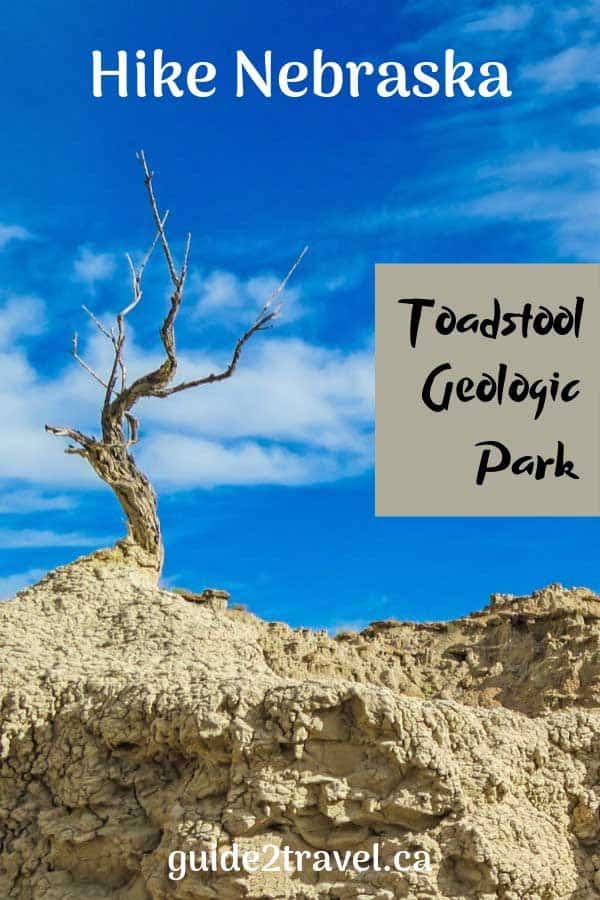 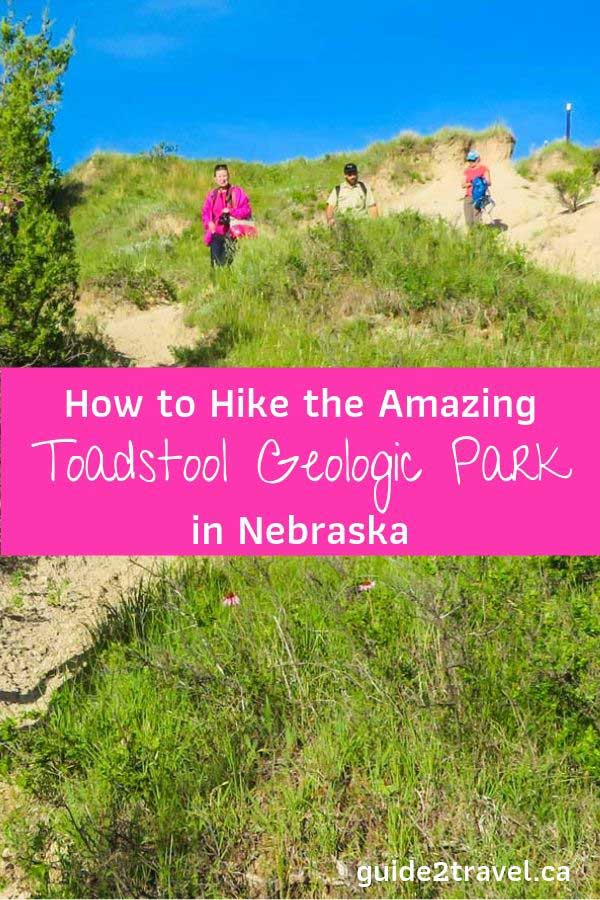 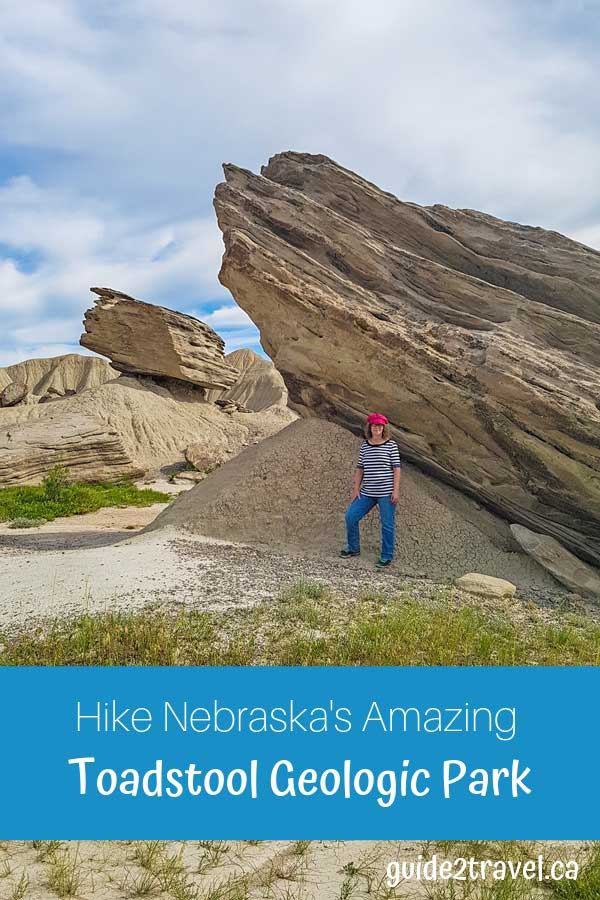