...travel adventures with a twist of history Latst ArticlesAdventures
;
An afternoon skimming over the water on a catamaran takes you into a world commonly enjoyed by famous folks and millionaires. And that’s exactly what many of us are looking for when we book an island vacation in the Dominican Republic to escape our cold winters. Indeed, the catamaran provides a boating adventure you’ll think of often once you’re back to your day-to-day life. 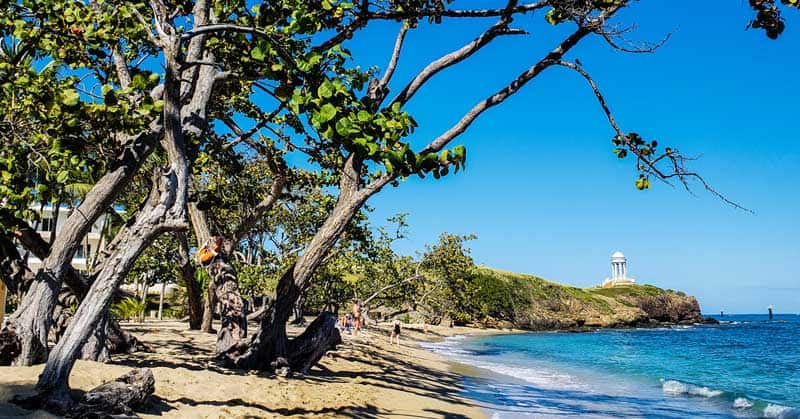 Beach at Playabachata Resort in Puerta Plata in the Dominican.

On my visit to the Domincan, I stayed in Puerta Plata. One of thirty-one provinces in the Dominican Republic, Puerta Plata is home to the first beach areas developed for tourism. Indeed, miles of caramel colored sandy beaches spread out along the coast of the Atlantic Ocean. And, since Puerta Plata resorts have been established longer than Punta Cana on the Caribbean side of the island, you’ll find a price point to suit your budget.

While price was important in my choice, I also found Puerto Plata a great destination due to its offering of more adventurous activities such as windsurfing, diving, and parasailing. And that’s exactly where the Freestyle Catamaran day adventure came in, since not only could I get the unique experience of the catamaran boat, I could also try snorkeling. 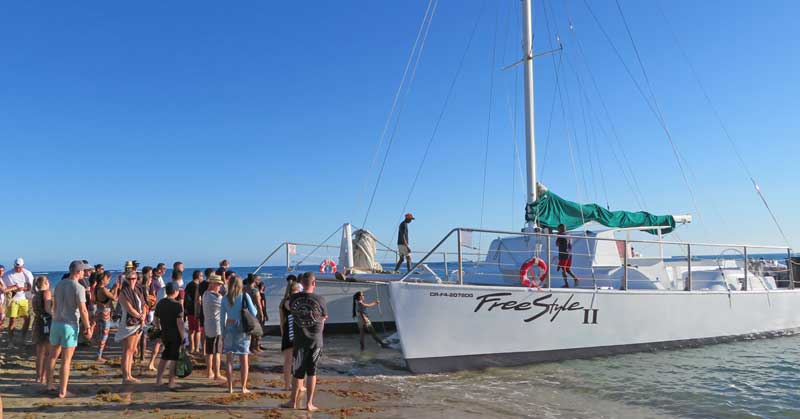 The name, catamaran, simply means “logs bound together,” and comes from the Tamil word, kattumaram. Indeed, the Tamil people from South India have been using catamaran boats since the 5th century. They were seldom used in the west though, until the 1800s.

As indicated by the name, a catamaran is a boat that has two hulls of equal size. In other words, the body of the boat is made up of two identical parts put together in a parallel formation. This type of construction creates a boat that’s very fast, so much so that in 1882 on Lake Ponchartrain in Louisiana, Nip and Tuck, the winner of the catamaran class, beat the fastest sloop’s time by over five minutes!

And I can guarantee that once the sails are raised it feels like you’re flying through the immense world of blue sky and water!

Adventure on the Freestyle Catamaran II 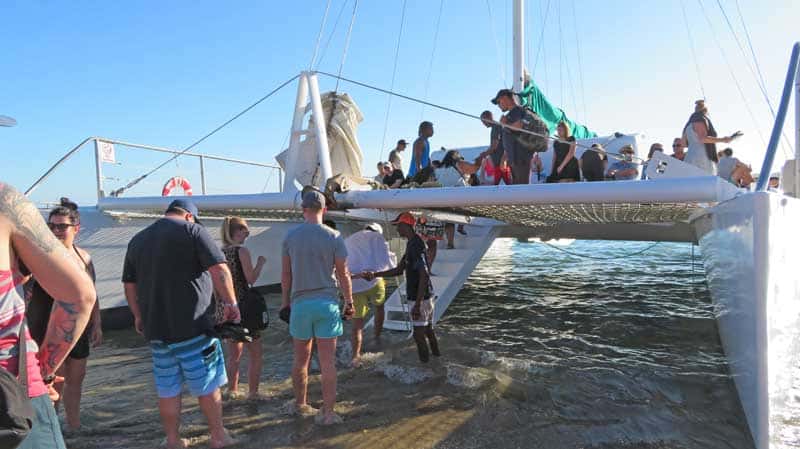 Boarding a catamaran boat in the Dominican Republic.

It’s easy to be an adventurer when you visit an all-inclusive in the Dominican Republic. Once I signed up for my tour with Sunwing, I just showed up in the lobby of my resort, the Playabachata, at the required time and boarded the bus for a scenic ride through Puerta Plata. Of course, since we were also picking up people from other resorts, it was also an opportunity to see which ones I might want to stay in on my next trip.

The bus took us to the bay of Playa Dorada, where the sand is so deep and soft you sink nearly up to your ankles. The catamaran, named FreeStyle II, is 54 feet long, so large enough to hold a number of passengers. It floated onto the beach while we watched, but we still had to wade through a few inches of water to reach the stairs that dropped down from the middle of the boat. Once everyone was on board, the stairs were pulled up to become part of the catamaran’s floor.

And we were off to the picturesque bay of Sosua to snorkel in the largest living coral reef on the Dominican’s North shore.

Snorkeling on the Bay of Sousa

Sousa in the Dominican Republic.

While feeling the wind in your face and the splashes of cool Atlantic water on your body were fun, I was really waiting to try snorkeling. The calm, crystal clear waters of our destination in the bay of Sosua, make it perfect for new and experienced snorkellers.

However, you should know how to swim, since the water is well over everybody’s heads! While I can’t, that didn’t stop me.

But first things first, which of course with snorkelling is putting on your mask and safety jacket. Then to the second, which is taking some quick lessons to figure out how to breathe through the mask underwater. And finally, the third — walk down the ladder (which was lowered again) and step off into the water to try out your new skills. 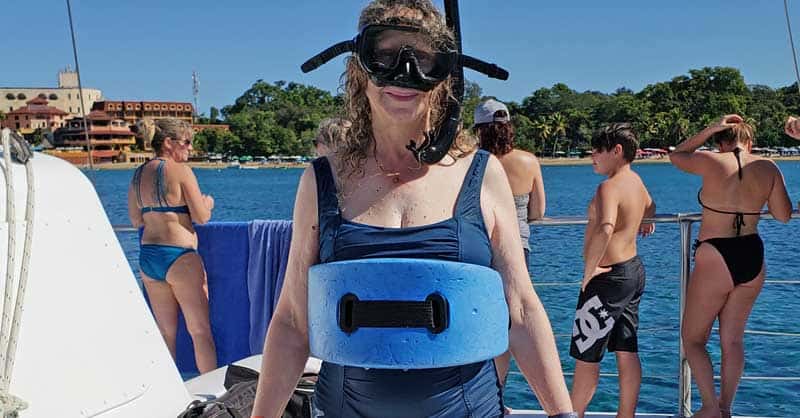 Linda Aksomitis ready to go snorkeling in the Dominican Republic.

See the Coral Reefs in the Dominican

Some things, of course, don’t go as planned. I immediately found myself rolling over and over and floating away in my safety jacket, while clutching at any part of the catamaran I could reach. So, much to my dismay, it was back on the catamaran.

All wasn’t lost though, since one of the crew generously took me and two other passengers back into the water with a lifesaver to hang onto, which he pulled around for us. So, it was on to applying the lessons I learned on the catamaran.

My first few attempts to stick just my face in water and leave the short air tube above the water resulted in some spitting and coughing as I gulped down a few mouthfuls of salt water. 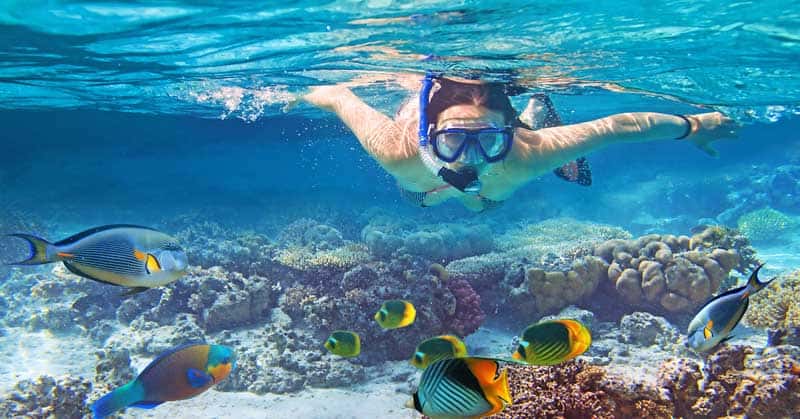 Young women at snorkeling in the tropical water — Photo by Patryk_Kosmider

However, I soon realized that if water went in my ears (which hurt!) that it also entered the breathing tube. Epiphany! Keep your ears above water and you’ll also have air to breathe.

So, I spent the next 20 minutes or so, watching the amazing variety of colorful fish and corals around me. It felt like I was immersed in a fish tank! 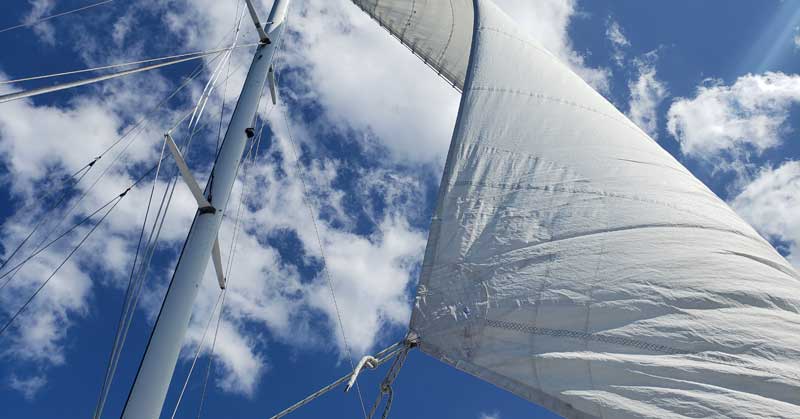 Sails on a catamaran boat in the Dominican Republic.

The catamaran moved a couple of times around Sousa Bay to give everyone lots of time to see the fish and corals with their snorkeling gear. Then, it was back on the ship for lunch and drinks while the crew raised the sails.

And we were off, skimming across the water, listening to the flap of the canvas overhead.

Plan Your Catamaran and Snorkeling Adventure in the Dominican

More Places to Visit in the Caribbean

The photo in the header above was taken on the beach of Playabachata Resort in Puerta Plata in the Dominican Republic. It was taken by Linda Aksomitis. 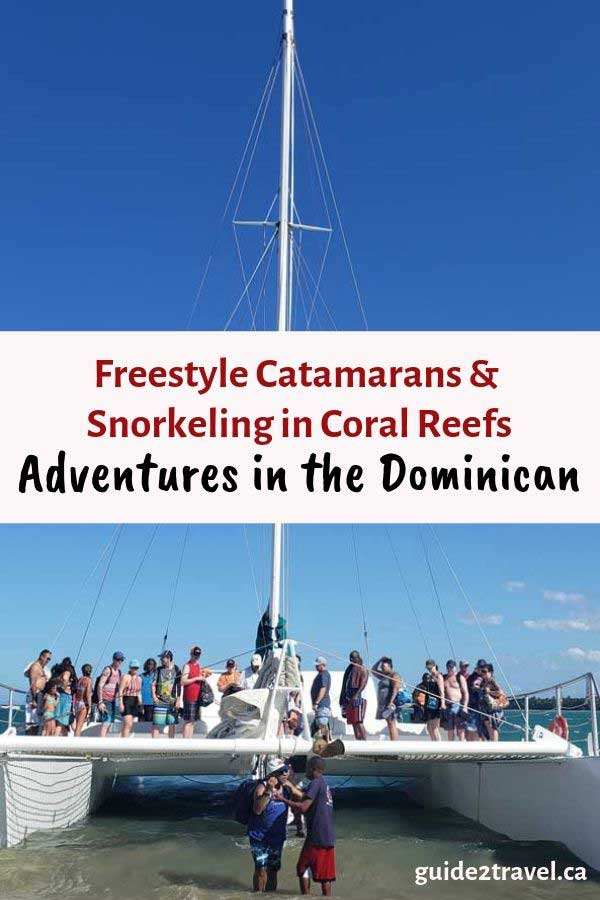 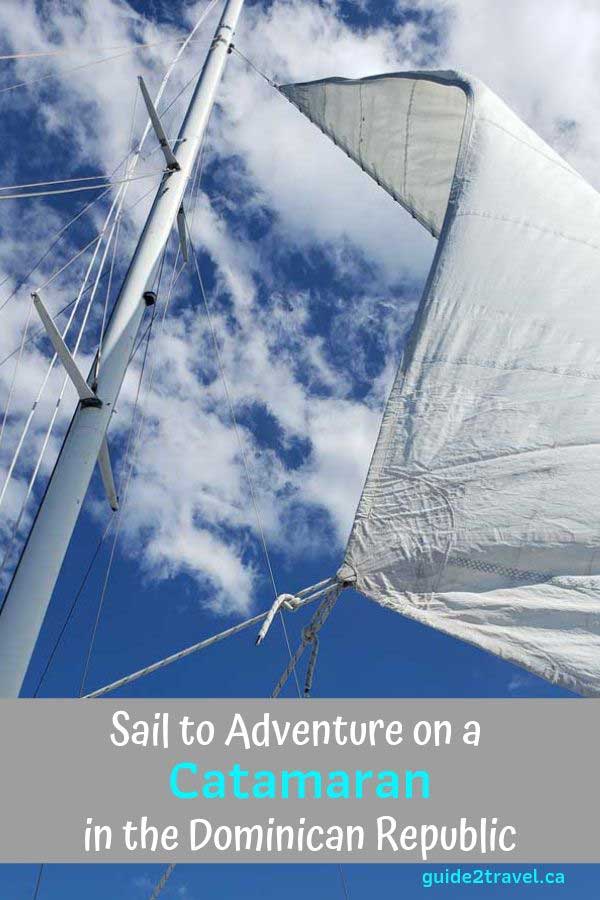 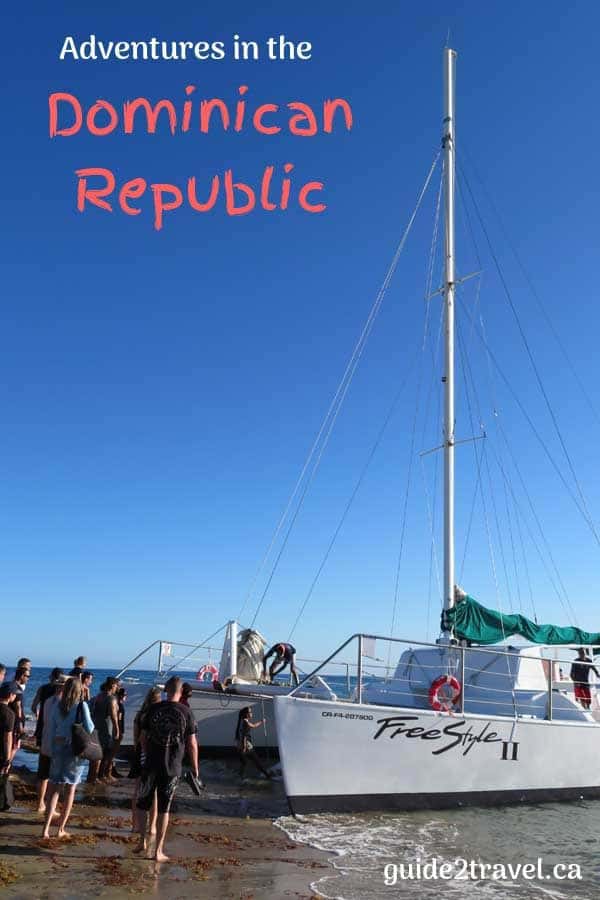