...travel adventures with a twist of history Latest Articles Adventures
;

Nanaimo, also known as the harbor city, is a city of just over 100,000 people on Canada’s Vancouver Island on the Pacific coast. If the name sounds familiar, it may also be because of their Nanaimo bars. Indeed, the one thing you’ll find everywhere through the city are variations of this tasty cake. There’s even a Nanaimo Bar Trail! But tasty cake is only the beginning. Here are some of the things to do in Nanaimo, British Columbia, that I enjoyed. 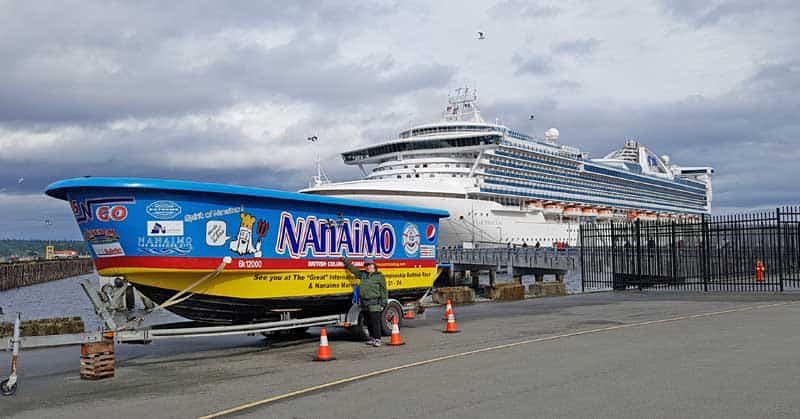 The Star Princess cruise ship docked at the Port of Nanaimo on Vancouver Island, Canada.

Nanaimo was the first stop on my Princess Lines cruise from Vancouver to Los Angeles. You can, of course, also fly, or drive to this destination using the ferry to cross from Vancouver to the island. There are fewer than half-a-dozen scheduled cruise stops here each year, so the people really make you feel welcome!

I arrived, of course, at the cruise ship terminal, a $24 million dollar beautiful Welcome Centre that opened in 2011. Free city shuttles were on hand to whisk me away after a brief stop at the Port Authority Customs. So, off I went to find things to do in Nanaimo while exploring its history and admiring the city’s colorful fall foliage for the day. 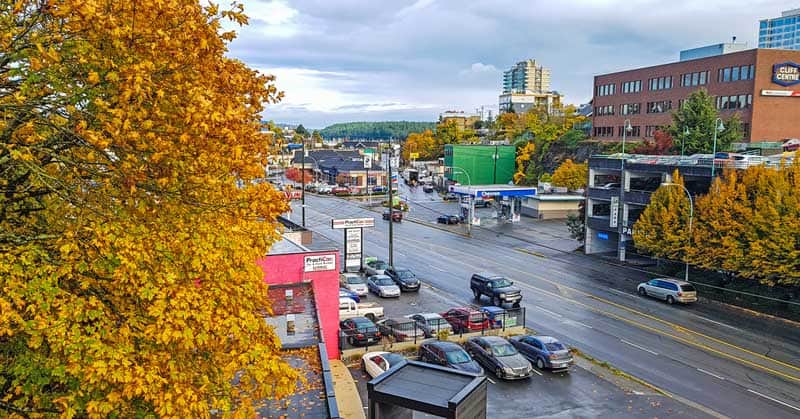 View of the Old City Quarter in Nanaimo, British Columbia.

I love historic buildings, so soon discovered that Nanaimo had a treasure trove of them for me to enjoy. While the area was home to the Snunéymuxw, a Coast Salish people, for centuries, coal mining brought the ancestors of many of today’s locals in the mid-1800s. In 1860 this ragtag community called Colviletown, which had grown up along the coast and mining area, was renamed Nanaimo (derived from Snunéymuxw). Shortly after, architect, George Deverill, designed one of the city’s most distinctive features — the fan shaped pattern of the downtown streets that now make the Old City Quarter.

Following the Old City Quarter Heritage trail map gave me an opportunity to pull together various parts of Nanaimo’s history. Indeed, there are three separate historic “walks” on the map. They include the railway connection walk, harbour connection walk, and of course, the coal connection walk.

My favorite building, though, was the Great National Land Building on Commercial Street. Completed in 1914, this Greek Revival structure fills the whole corner of a downtown street. Indeed, it seems to preside over the area much as a judge or monarch might. 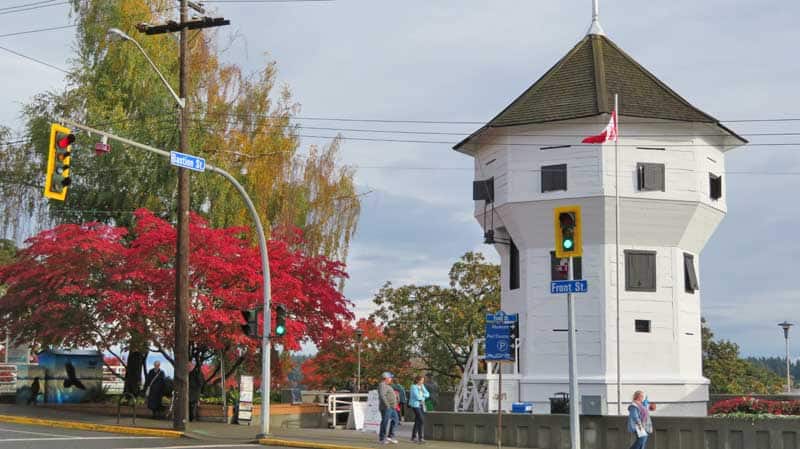 The historic Bastion on Front Street in Nanaimo, British Columbia.

You may be most familiar with bastions that are part of loarge historic forts or castles. Nanaimo’s isn’t. Instead, the Bastion is a three-story octagonal freestanding building that looks more like a lighthouse than anything else. Constructed in 1853, it’s made from 16-inch square timbers fitted together with wooden pegs.

In 1891 the Bastion was purchased from the Hudson’s Bay Company, who had built it as a trade fort, and moved it across the street. Indeed, it’s the only remaining original freestanding tower structure built by the Hudson’s Bay Company. A second move, in 1979, when Nanaimo’s roads were widened, put the tower in its current location in the Waterfront District. It has since had restoration work and was listed on Canada’s register of Historic Places in 1985. 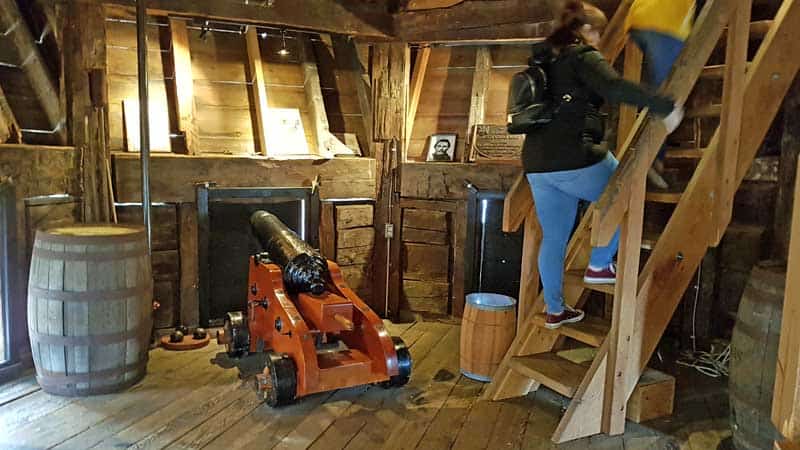 Interior of the Bastion built by the Hudson’s Bay Company in Nanaimo between 1853 & 1855.

The Bastion is now managed by the Nanaimo Museum, and is home to a number of exhibits. Many of them are artifacts related to the history of the Hudson’s Bay Company. As well, the Bastion is a tourist information centre during the summer season.

Firing of the Canon at the Bastion 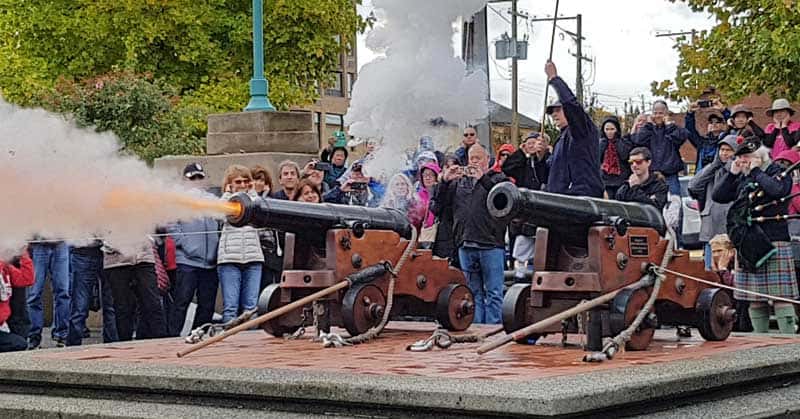 Daily noon hour firing of the canons at the Bastion in Nanaimo, British Columbia.

When you’re in Nanaimo make sure you get to the Bastion before noon, so you can watch the firing of the historic canons on the mark of 12 pm. It’s easy to find, since the canons are right outside the Bastion on the Waterfront Plaza.

So what about the canons? Well, they were originally installed in the Bastion to defend the harbor. While the modern demonstrations are all about the bang and smoke, the canons could send a 6 lb. cannon ball across the water to Protection Island.

Firing the canons, here, as elsewhere in the world these days, is all about ceremony. And this one starts with spine-tingling music from local bagpipers, so has it all. So, if you’re looking for things to do in Nanaimo related to history, make this your first iconic stop! 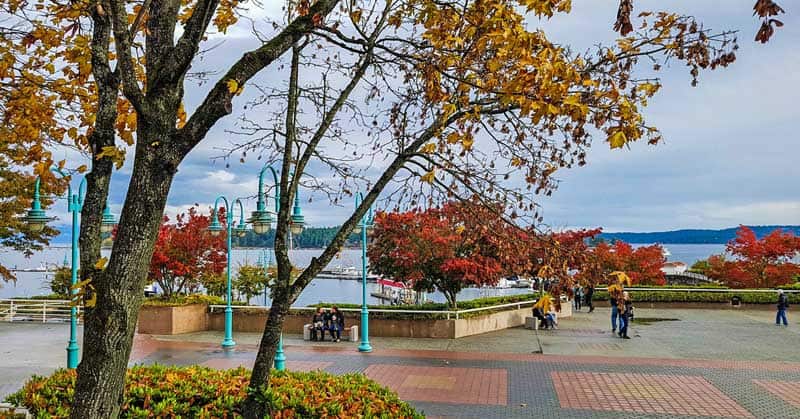 The Pioneer Waterfront Plaza is where all the action happens with the canons at noon — as well as the rest of the day. Completed in 1993, you’ll find it’s a great starting point for many things to do in Nanaimo from a leisurely walk to shopping.

My favorite part of the plaza was the view of the harbour. Well, that, and the beautiful autumn foilage of the trees! While the plaza was quiet on my visit, the upper deck (20,000 square feet) of the plaza provides a great outdoor venue for events in Nanaimo. Fridays, you’ll find the Nanaimo’s Farmer’s Market, which runs from April to October. You’ll also find lots of other community events.

From the plaza, you can wander through a number of intriguing little craft shops, dress shops, even a cheese shop (McLean’s Specialty Foods feature 150 different imported cheeses from around the world!). Or, you can check out the Harbourfront Walkway, a multi-use trail along the Newcastle Channel and downtown waterfront. 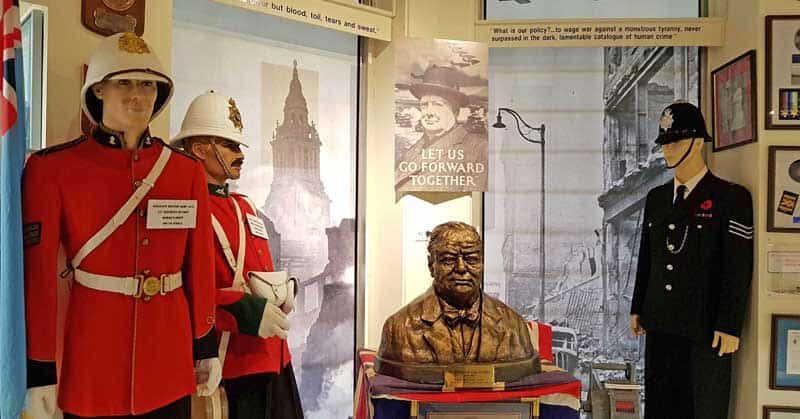 Although it’s a small city, there are two great museums to add to your list of things to do in Nanaimo. The first, the Nanaimo Museum, is dedicated to the history of the area, from local First Nations through the coal mining and logging eras. While small, there’s lots to see here.

And the second, the Vancouver Island Military Museum, as you’d guess, is dedicated to the military. I found it a treasure trove of artifacts and information about various time periods in the Canadian military and Royal Canadian Mounted Police (RCMP).

I started my tour with the H.M.C.S. Nanimo, an anti-submarine ship with anti-aircraft weapons, depth-charges, and sonar, that served on a convoy during WWII. As well as information on the ship, there were tons of facts and stories about Canada’s part in defending the allies. I was also pleased to see maps and data about the Battle of the Atlantic, since I’d learned a lot about the battles in the Pacific at the National Museum of the Pacific War in Fredericksburg, Texas.

From there, I took a step back in time to the War of 1812. It was a conflict between the United States and Great Britain over British violations of U.S. maritime rights in North America. Indeed, in 1814, a British general even burned down the White House (then called the Presidential Mansion)! I also found the story about Camp Nanaimo (1939 – 1946) intriguing. During that period, 16,000 men with 36 regiments trained in the tiny community.

But these are only a few of the fascinating stories you’ll find exploring this museum. 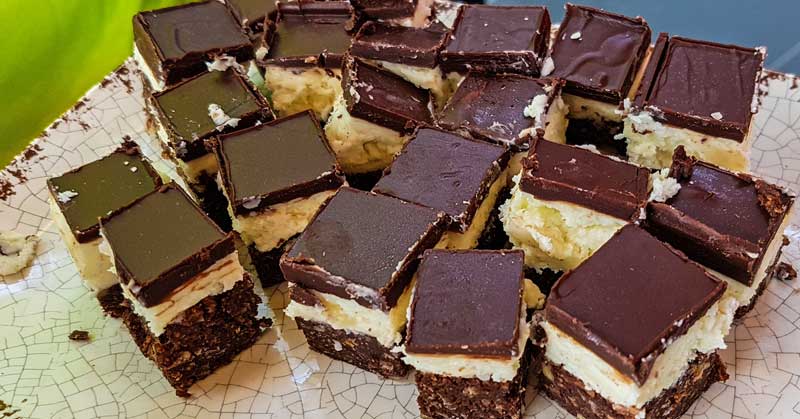 If you like cake — and most of us do — then you’ll need to taste one, or more, different Nanaimo bars as you explore the city. Technically, you’d probably call this tasty dessert Nanaimo cake, but since it’s cut into bars to serve, it’s called Nanaimo Bars. In fact, Nanaimo Bars were named the nation’s favourite confection in a 2006 survey by the National Post.

What’s in Nanaimo bars? Well, Nanaimo bars have three layers: a bottom crumb layer, a middle custard layer, and a final layer of chocolate. If you’d like to make your own Nanaimo Bars, there are several different mixes available. You can also use my favorite recipe from the Nanaimo website: https://www.nanaimo.ca/about-nanaimo/nanaimo-bars

Indeed, one of the most important things to do in Nanaimo is to check out at least a couple of different stops on the Nanaimo Bar Trail!

On the Web: Tourism Nanaimo

Google Map of Things To Do in Nanaimo, British Columbia

The photo in the header above was taken by Linda Aksomitis in Nanaimo, British Columbia, Canada. It is of the Great National Land Building, a Neo-classical piece of architecture completed in 1914. 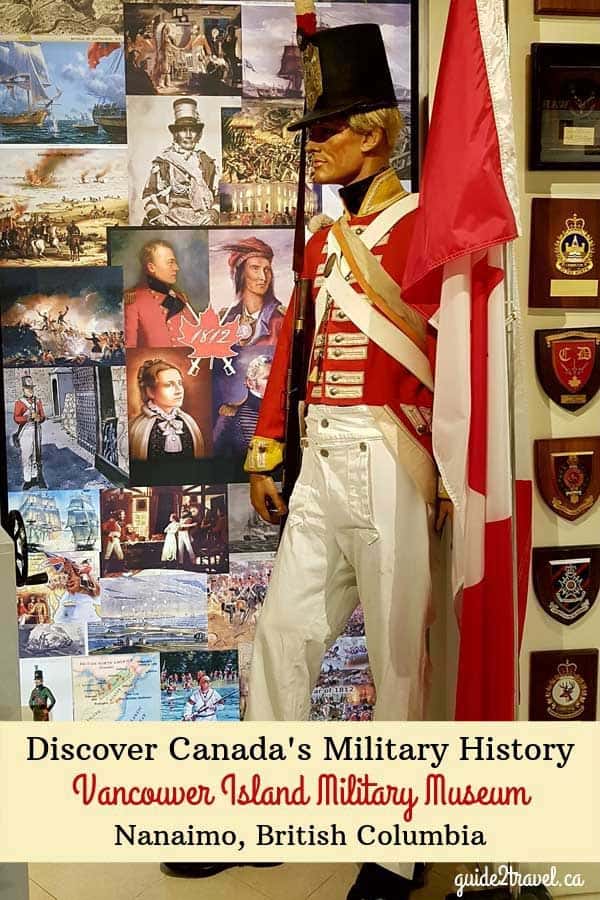 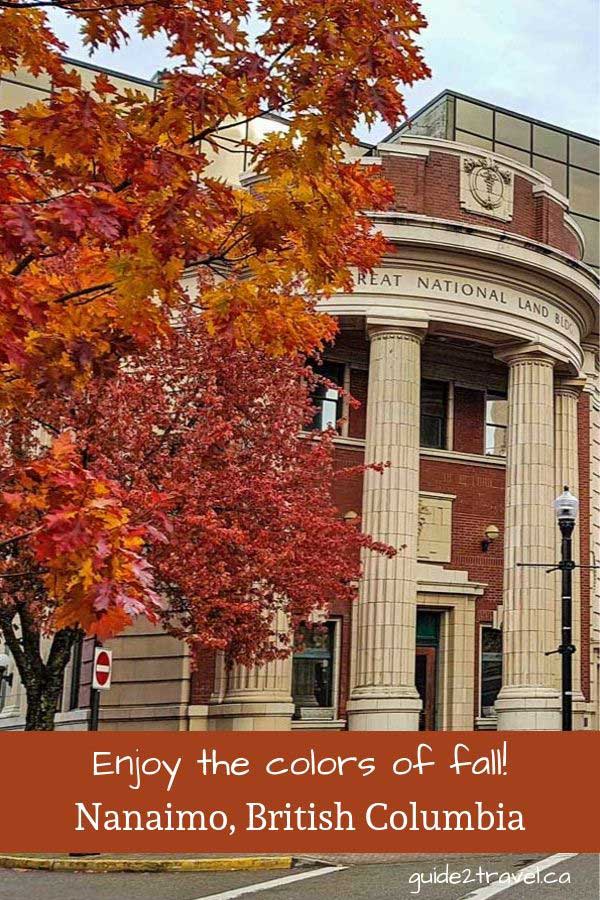 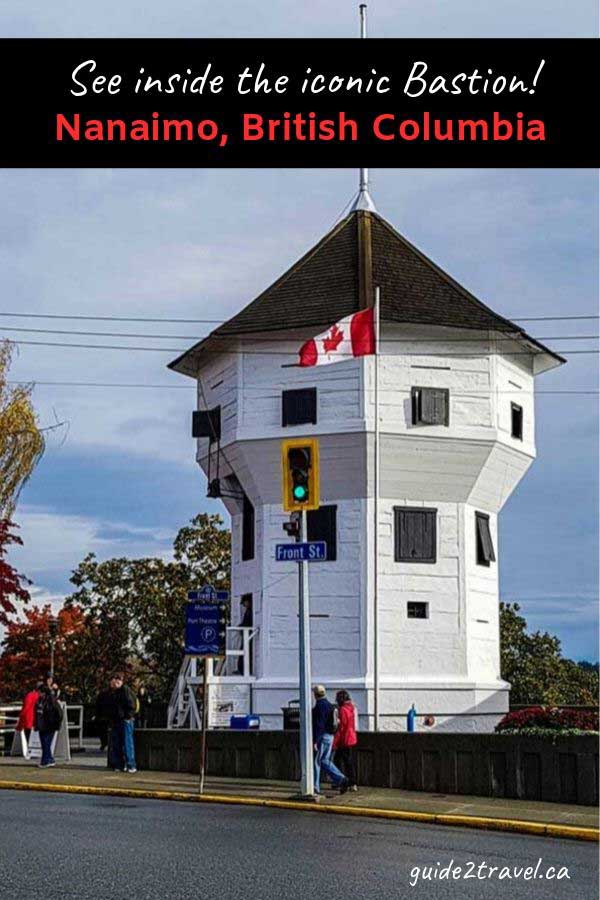