...travel adventures with a twist of history Latest ArticlesAdventures
;
Every Canadian should see these war cemeteries! I’ve heard others express this sentiment about war memorials in France and Belgium. So the 75th anniversary of D-Day on June 6, 2019, was the perfect excuse to visit the historic Second World War sites where so many Canadian soldiers gave their lives for our freedom. And while in Normandy, the relative proximity and abundance of First World War cemeteries — including the iconic Vimy Ridge Memorial — were an obvious addition to the itinerary.

We chose an escorted motor coach tour, but you could easily plan your own independent circuit of the cemeteries and associated memorials and museums around the well-signposted roads in Normandy and the Ypres Salient. Here are a few highlights of our itinerary. 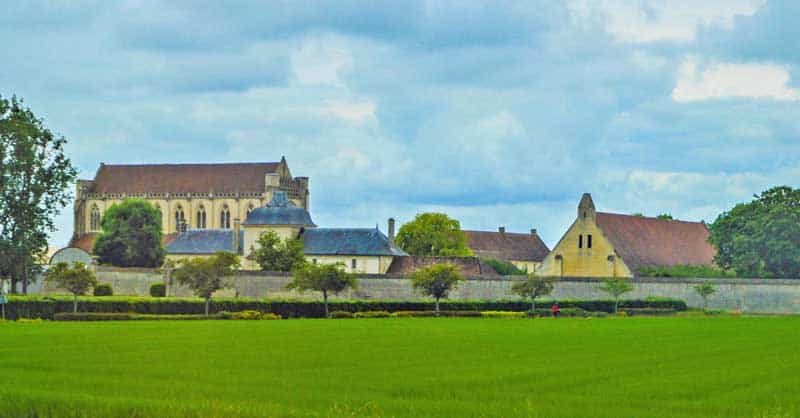 On the outskirts of Caen, you’ll find the poignant Ardenne Abbey memorial to 18 Canadian POWs who were executed by the 12th SS Panzer Division in June 1944, in direct violation of the Geneva Conventions. Photos and names of the soldiers are displayed; their remains were found when the family that owned the property dug up the garden after the war. A German commander was convicted of war crimes and spent 10 years in prison. A sobering story, but the sincere and respectful remembrances here set the tone for our journey. 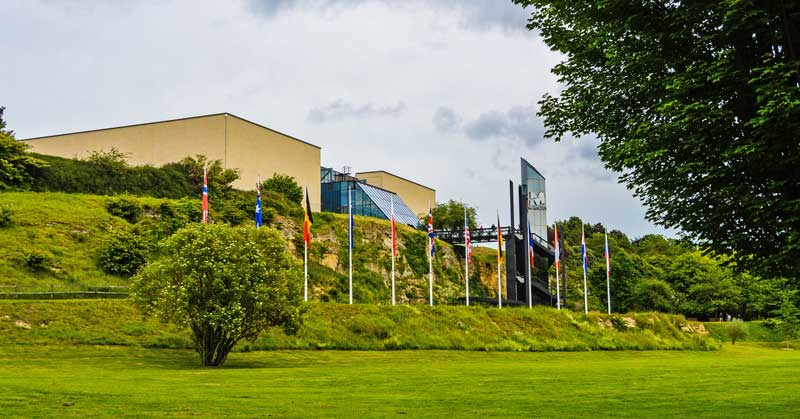 Located on the northern edge of Caen, the Caen Memorial Museum’s extensive exhibits and a film detail the history of 20th century conflicts, and encourage the spirit of peace. Flags of the nations involved in the Battle of Normandy welcome visitors in the forecourt. Memorial gardens below the main building are dedicated to Canada, Britain and the US as liberators of France. 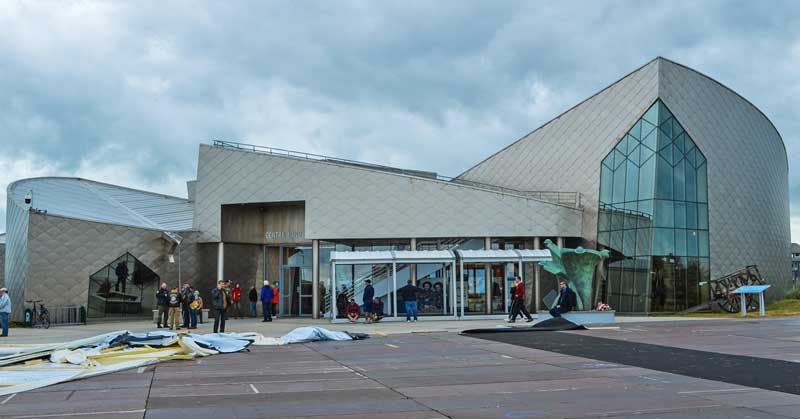 Built by D-Day veterans and opened on June 6, 2003, the Juno Beach Centre Museum at Juno Beach is a must see for Canadians. We visited on June 7, as the building was closed during the 75th Anniversary ceremony the previous day.

Exhibits immerse visitors in details about Canada’s military and civilian contribution to the Second World War and in particular, the Normandy invasion. Your journey begins with a surround-sound and visual simulation of the ride in a landing craft on June 6, 1944, until the ramp opens to admit you to the various displays.

The courtyard outside, with interpretive posters and the remains of a German bunker, overlooks the sandy beach below grassy bluffs. It could be a beach anywhere, except these grains of sand bore witness to the deadly chaos of that June day 75 years ago. 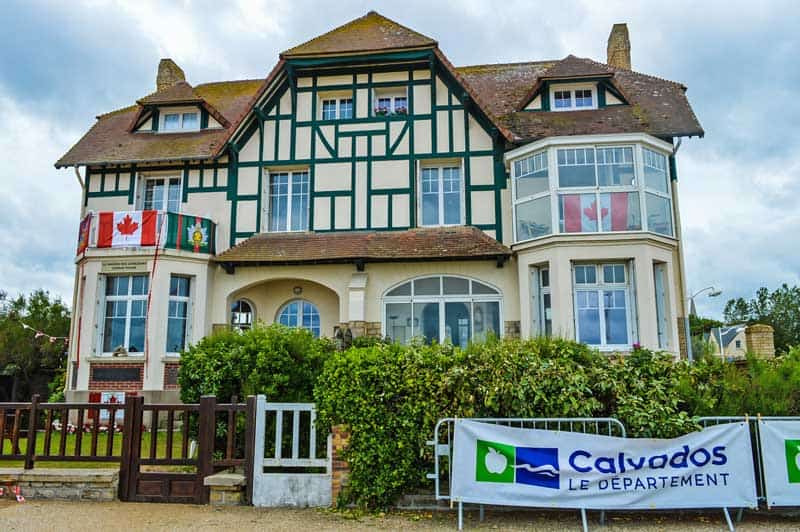 A few minutes up the coast at the eastern end of Juno Beach, you’ll find Canada House. The stately structure is still a private residence, partly owned by the Hoffer family, as it was in 1944. The first building liberated by Canadian troops stood resolute while the D-Day invasion battered everything around it.

After veterans began making pilgrimages here following the war, the owner decided it should always be a shrine of remembrance. It is filled with artifacts and proudly adorned with Canadian flags, like those on the beach marking what would have been a passage cleared of mines for landing craft. 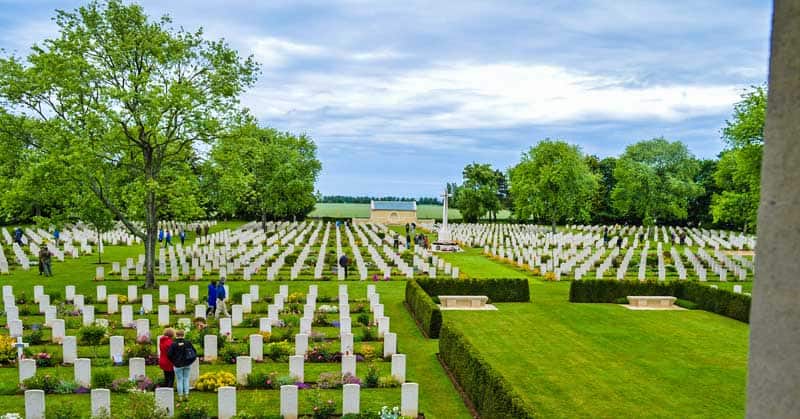 Encircled by Canadian maples and pines, the Beny-sur-Mer Canadian War Cemetery is the peaceful resting place for 2,049 soldiers who fell at nearby Juno Beach and area as the D-Day invasion unfolded. Included with mostly Canadians is one French Resistance fighter, representing that group’s commitment.

Maintained by the Commonwealth War Graves Commission, these cemeteries were designed with precision and care for remains brought from other temporary sites. However, a single marker set off to the side honours one Canadian whose remains are known only to be somewhere within the cemetery borders. On our tour, it was the first cemetery we visited; the predominant impression was of the enduring respect given to these fallen warriors. 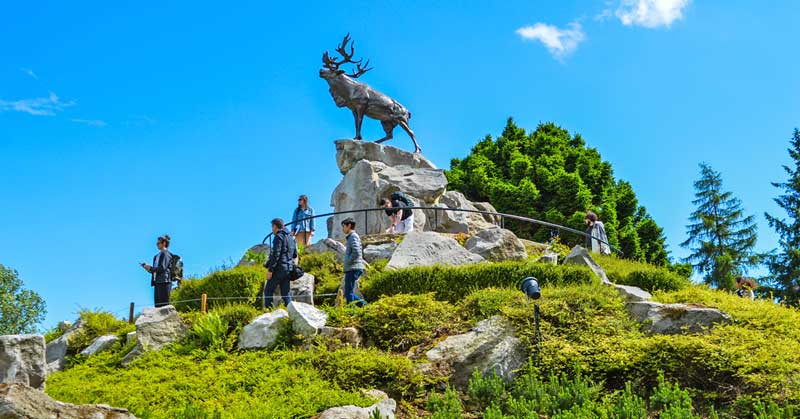 A bronze caribou, emblem of the Royal Newfoundland Regiment, stands guard at Beaumont-Hamel on a granite cairn amid native plants of Newfoundland and Labrador. The Battle of the Somme had barely begun on July 1, 1916, but that single day saw the loss of 90% of the 800 strong Newfoundland force.

This First World War memorial is the largest battlefield area of the Somme where trenches are preserved in a natural state. Names are listed on a memorial plaque along with the inscription, “To the Glory of God and in perpetual remembrance of those officers and men of the Newfoundland Forces who gave their lives by Land and Sea in the Great War and who have no known graves.” 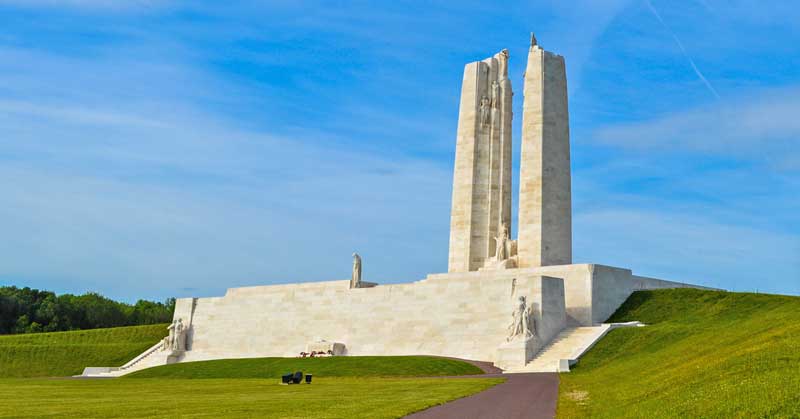 A highlight of the tour—the First World War monument at Vimy Ridge – glowed like a beacon in the sun. We arrived before the crowds to see the massive structure towering on a slight rise over expansive lawns where unexploded munitions lie buried.

You approach from the back; the monument faces into the Lens Valley, a prize the Germans were loathe to lose for its coal reserves. As you follow the path for a side view, light and shadow give texture to the creamy limestone with carved lettering of over 11,000 names. You’ll pause in reverence before taking the last steps to the front. You may read about the detail of the sculptured figures completed onsite over 11 years, but nothing quite prepares you for the grandness of this memorial. The nearby Visitor Centre and preserved trenches enhance your awareness of the significance of the desperate battle here in April 1917. 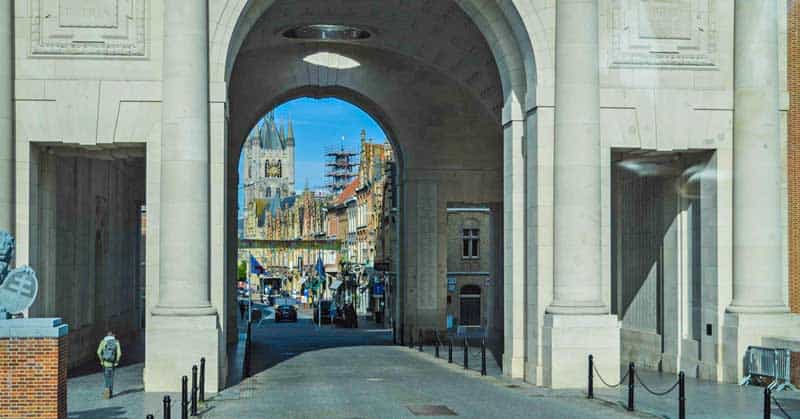 The Belgian city of Ypres lay in ruins after devastating WWI battles including the first use of poison gas by the Germans. The Cloth Hall, a replica of the original medieval building, now houses the In Flanders Field Museum where you’ll find a multi-sensory presentation about the history of this often fought-over, ancient textile capital.

A few blocks from this Grote Markt location (with its shops and restaurants), the Menin Gate Memorial to the Missing guards the eastern city portal through which soldiers left to fight. As with other war memorials, its walls bear the names of 54,000 who died. Each evening at 8 pm (since 1928, except during WWII) the arches and columns echo the haunting notes of bugles and bagpipes during the Last Post ceremony. 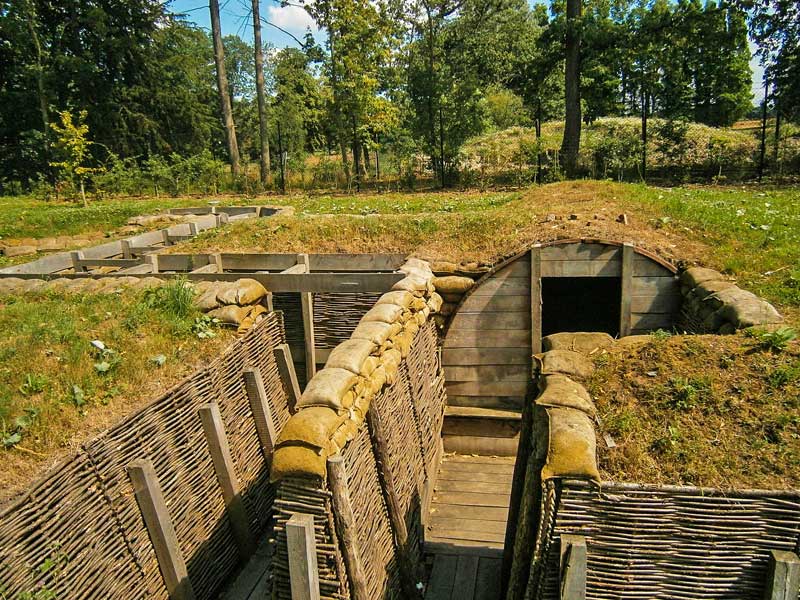 We spent a day touring several sites within a short distance of Ypres. Passchendaele is another poignant note in Canada’s WWI annals, again for 1000s of lives lost in a short time. Canada Gate is the twin to the Last Steps Memorial Arch in Halifax: the troops boarded ships there, and marched into war here. Symbolic footsteps are burned into the path through both gates. 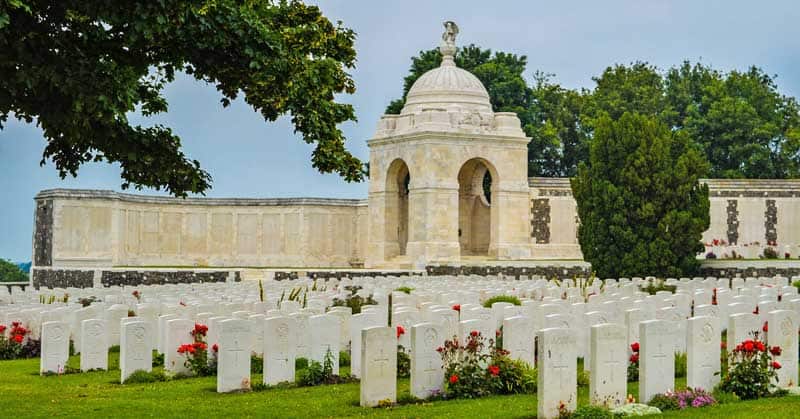 On the western slope of Passchendaele ridge, the largest Commonwealth graveyard in the world holds 12,000 graves and a memorial dedicated to 35,000 missing. From the road, the approach to this huge area of Tyne Cot Cemetery takes you halfway around the perimeter to a gateway arch. You enter looking up the slope to see the curved walls that form the back of the cemetery where engraved names are lit by the setting sun. To this day, newly found remains are still being interred here. 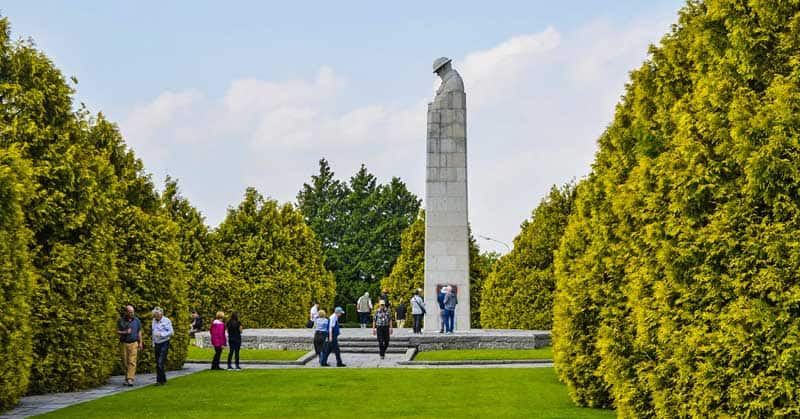 In a small park surrounded by shrubs and trees, at an intersection called Vancouver Corner, the St Julien Canadian Memorial granite column features a soldier with head bowed and hands resting on the rifle butt.

It’s a posture known as ‘reversed arms’ to show mourning or respect, as you’ll see at services of remembrance. It marks the place where 2000 Canadians fell to gas attacks in April 1915. The Brooding Soldier design was the runner-up in the competition for a national monument – the winning entry is the twin towers at Vimy Ridge.

Close to Ypres, we made the last stop of our tour at this site of an Advanced Dressing Station (1915-1917). Because Essex Farm Cemetery is a war-time cemetery, it has an irregular layout unlike the planned and more orderly post-war cemeteries that hold many more graves. It contains 1205 graves of mostly British and Canadians, with 103 unidentified.

Notable is the marker of a soldier who lied about his age to enlist at 14. It is best known as the spot where John McCrae wrote his poem, In Flanders Fields, after the death of a fellow soldier.

The cemeteries and memorials we visited all bore poppies and Canadian flags in honour of the 75th Anniversary of D-Day. But anytime you visit, be prepared for an emotional journey as you read the inscriptions and take in the multitude of gravestones and engraved names. This is a history lesson we all need.

The Google map below has the first 10 memorial stops.

About the Author: Gillian Richardson is a freelance writer of children’s books and book reviews, and enjoys musing about nature at https://gmrichardson.wordpress.com

The photo in the header above was taken by the author of this article, Gillian Richardson, at Tyne Cot Cemetery in Passchendaele, Belgium, along with all of the rest of the photos in the article. 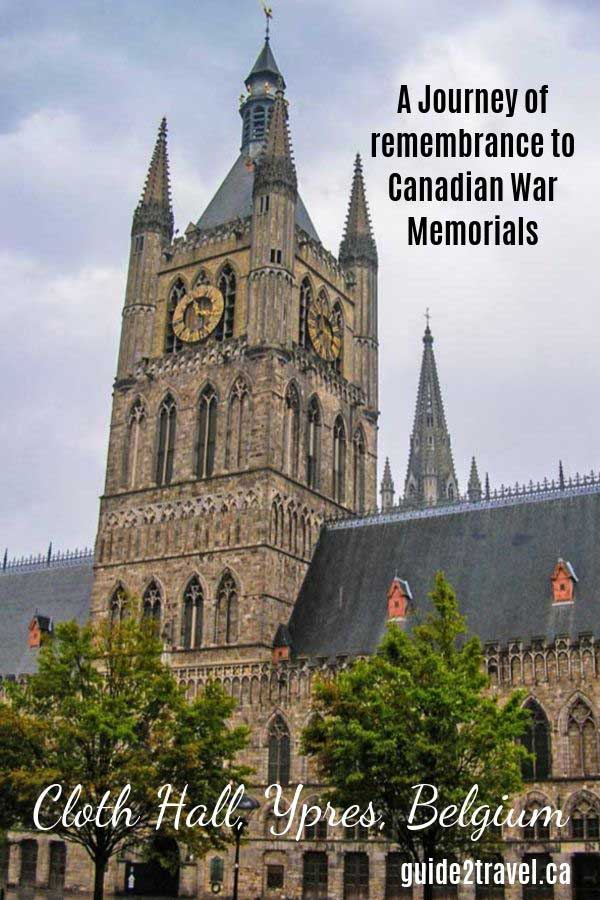 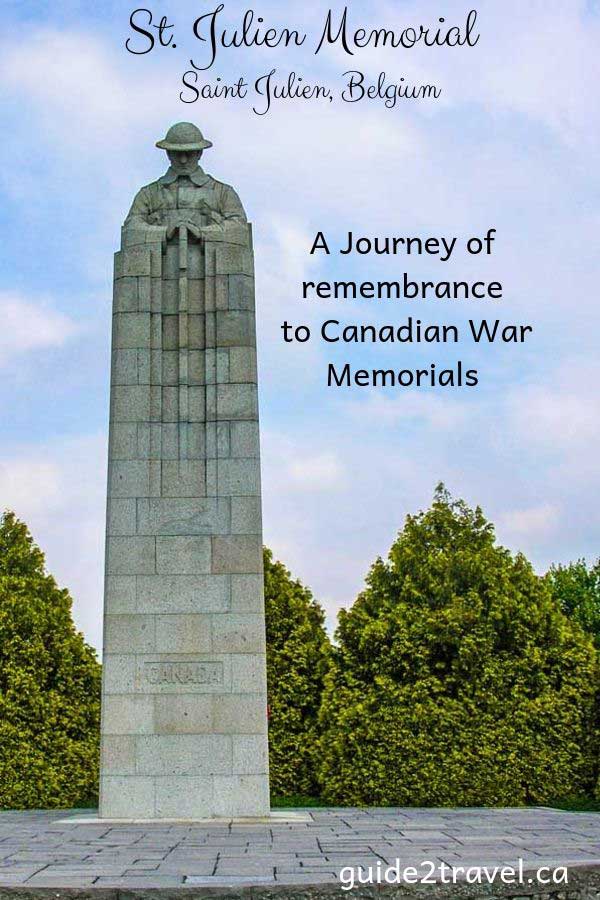 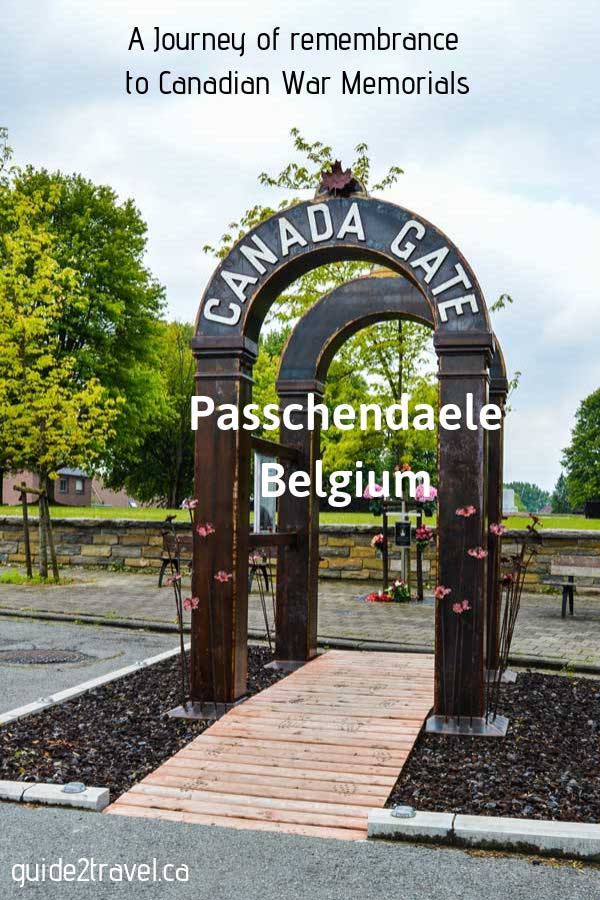