...travel adventures with a twist of history Latest ArticlesAdventures
;
The new slogan for North Dakota, Be Legendary, may have some controversial elements, but it still captures the state’s spirit — past and present. And nothing is more legendary than the Bonanza farms of the late 1800s.

Indeed, according to the State Historical Society of North Dakota, the Great Dakota Boom of 1878-1887 was the busiest period of Euro-American settlement on the Northern Plains. At the time, North Dakota territory led the country in land registered to homesteaders. Today, visitors can step back to that era by visiting the Bagg Bonanza Farm in Mooreton, and the Bonanzaville Museum in Fargo.

How Did North Dakota Bonanza Farms Get Their Name? 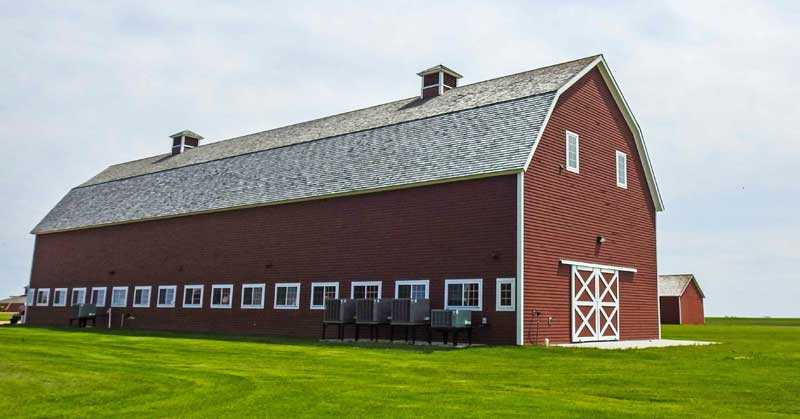 Historic barn on the Bagg Bonanza Farm in North Dakota.

Many of us think of gold when we hear the word Bonanza. In fact, the term came from the Spanish, and meant “a rich lode,” according to the online etymology dictionary. The first use of bonanza with this definition is documented as 1844, which coincidentally is the start of the gold rush fever that consumed North Americans until the end of the 1800s.

Or, if you grew up with a dad who loved westerns on tv like I did, you may think of Bonanza, the television show that ran from 1959 until 1973. It was set in Virginia City, Nevada, at the center of the famed Comstock Lode silver strike of 1859.

The wealth on Bonanza farms, however, didn’t come from minerals, although it did come from the ground and was “gold.” Indeed, Bonanza farms were enormous dirt farms that grew golden fields of wheat. Most were situated along the Red River, which flows for 550 miles through North Dakota, Minnesota, and Manitoba. And yes, while Bonanza farms, like gold strikes, meant that someone hit it rich, there’s a lot more to the story.

Over the years, North Dakota has been home to 91 Bonanza farms, according to True West Magazine. While the farms were all supersized, some were much larger than others. In fact, they ranged from 3,000 to 200,000 acres each in an era when North American farms were around 160 to 320 acres. 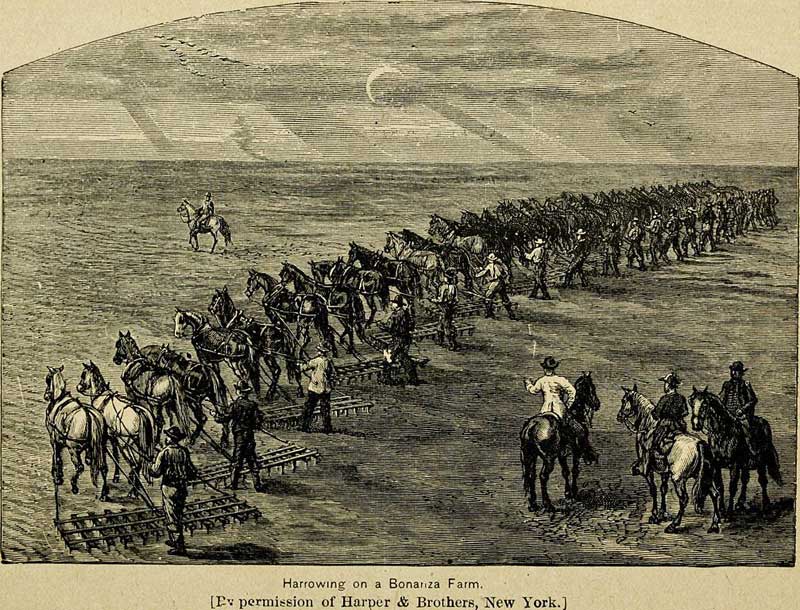 The Bagg Farm in Mooreton wasn’t the first, or even the largest, of the Bonanza farms. It has, however, survived the longest. Named to the National Register of Historical Places in 1985, it was also added to the State Historic Sites Registry in 1986. In 2005, it was designated as a National Historic Landmark.

A number of buildings on the Bagg Farm, including its amazing centerpiece, the 1870s main house, originated on the nearby Downing Farm. J.F. Downing was an attorney and businessman whose landholdings exceeded 9,000 acres in North Dakota during the late 1800s. His nephew, Frederick Bagg, managed the farm for 20 years. When Mr. Downing died, in 1913, Frederick Bagg moved one-fourth of the buildings a short distance away and started the Bagg Bonanza farm with his wife, Sophia, who had been a cook on the Downing farm.

While the marriage of two farm employees may sound pretty standard, the real story truly is part of what makes North Dakota’s “Be legendary” slogan so apt. It all began in October 1889 with a disgruntled worker. The man called from the farm house entry door for Frederick, who was eating the mid-day meal along with a couple of dozen other men at the long dining room table.

Frederick went to the door — only to be met with a razor knife pointed at his neck!

Sophia, seeing it through the window into the dining area, grabbed a broom and ran to the door. With a mighty push of the broom into the worker’s face, she managed to shove him away and save Frederick’s life.

The couple was married three months later, on New Year’s Day, in 1890. 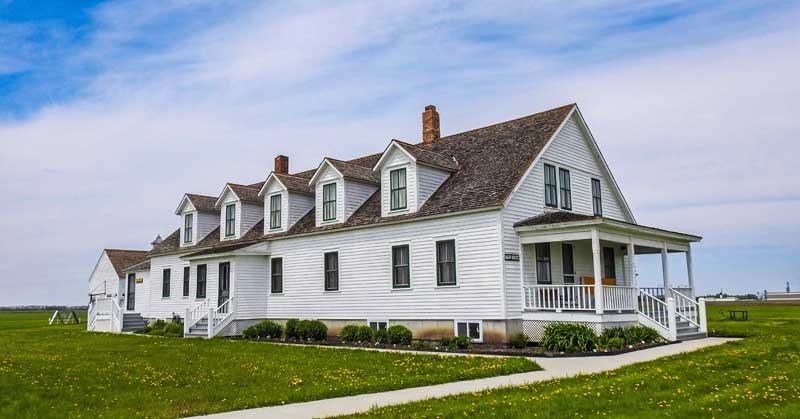 To be honest, it was the photos of the Bagg Farm Main House (84′ long and 30″ wide) that led me to put the Bonanza farm on our road trip itinerary. Similarly, plantation homes are one of the attractions I enjoy exploring most in the deep south. Indeed, I must confess that as a child, I’d snuck away more than once (unbeknown to my mother!) to explore pantries and parlors and upstairs rooms that were typically off limits when we were out visiting. And I was dying to get a chance to explore the completely restored 20-room main attraction at the Bagg Farm!

More simply built than I’d expected, the farm house had nothing in common with Louisiana plantation houses of the south. There was no formal sitting room — no place to entertain. Rather, the first floor had both a main and family kitchen along with pantry, storage and clean-up rooms, a dining room that could seat 25 at a long table, bathroom and porches. Upstairs, there were twelve bedrooms to go with the four on the main floor.

While workers obviously shared bedrooms and beds, opportunities for romantic encounters between the sexes were limited. Indeed, there’d been a wall between the men’s and women’s bedrooms, along with separate staircases at opposite ends of the house!

A Day in the Main House 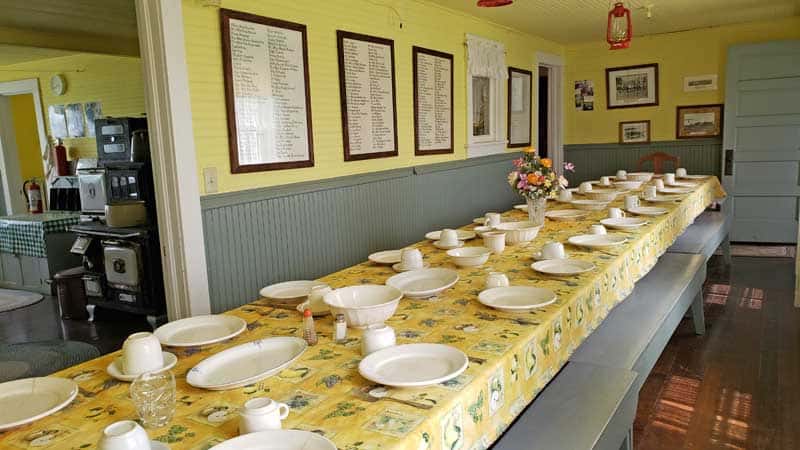 I found the day-to-day life on a Bonanza farm fascinating, with the dining room the most fascinating of all.

Around a 100 to 120 men worked on the farm during seeding and harvest. Women, of course, worked in the farm house to do the cooking and cleaning. And there was a lot of both to do! These are some of the amazing things I learned from our guide touring the Bagg Farm, Virginia Goerger. A talented historian, she also wrote the book, A Century of LIfe on the Bagg Farm and Red River Valley (see the references below). 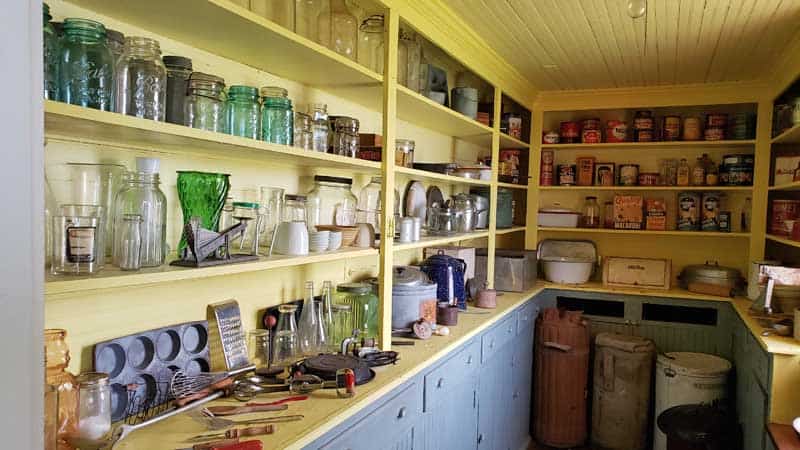 Pantry at the Bagg Bonanza Farm main house is still stocked with all of the cooking equipment.

You can go into a number of restored historic buildings on the Bagg farm. Two of them, the mule barn along with the bunkhouse, were moved from the Downing farm in 1915. As well as restored buildings there are also foundations for buildings no longer on the site. Seeing the enormity of the existing barn, which is 40′ by 28′, I can hardly imagine the barn that would have stood on the 128′ by 36′ horse and mule barn foundation!

As you walk around the site, it’s easy to understand the orderly farming methods used to run a farming operation with the enormity of a Bonanza farm. With machine sheds to hold tools and machines, the blacksmith shop for shoeing horses, the garage that started as a machine shed but eventually housed cars, the foreman’s house and farm office, and granaries for storage (the elevator was destroyed during a wind storm in 1954), it was an effective farming system.

Of course, there are also additional buildings required to look after the community that lived on the Bagg Farm. If you’ve ever visited a traditional privvy, you’ll be impressed with the main outhouse that’s 8′ by 8′ in size. And the laundry building really speaks to the drudgery of daily chores! Inside it, you can also see generations of machines used to do laundry.

The laundry isn’t the only building with artifacts in it though. You’ll see all kinds of intriguing machines from the pantry of the main house to the forge, tools and materials for smithing.

While the Bagg Bonanza Farm is only open Memorial Day to Labor Day, you can also explore Bonanza farming some 50 miles away in Fargo, North Dakota, from May 1 to October 31. Both attractions may be available at other times by appointment (see Plan Your Visit below).

The Bonanzaville open air museum in Fargo is one of North Dakota’s most important historical attractions. Even though I’ve visited a lot of prairie historical museums, there was still lots to see and learn.

Indeed, Bonanzaville has 43 historic buildings to see, and more than 400,000 artifacts displayed on the 12 acres that belong to the museum. Well organized into streets, the museum is easy to navigate. The buildings take visitors through the typical rural, agricultural exhibits with some extras thrown in.

Things to See at Bonanzaville 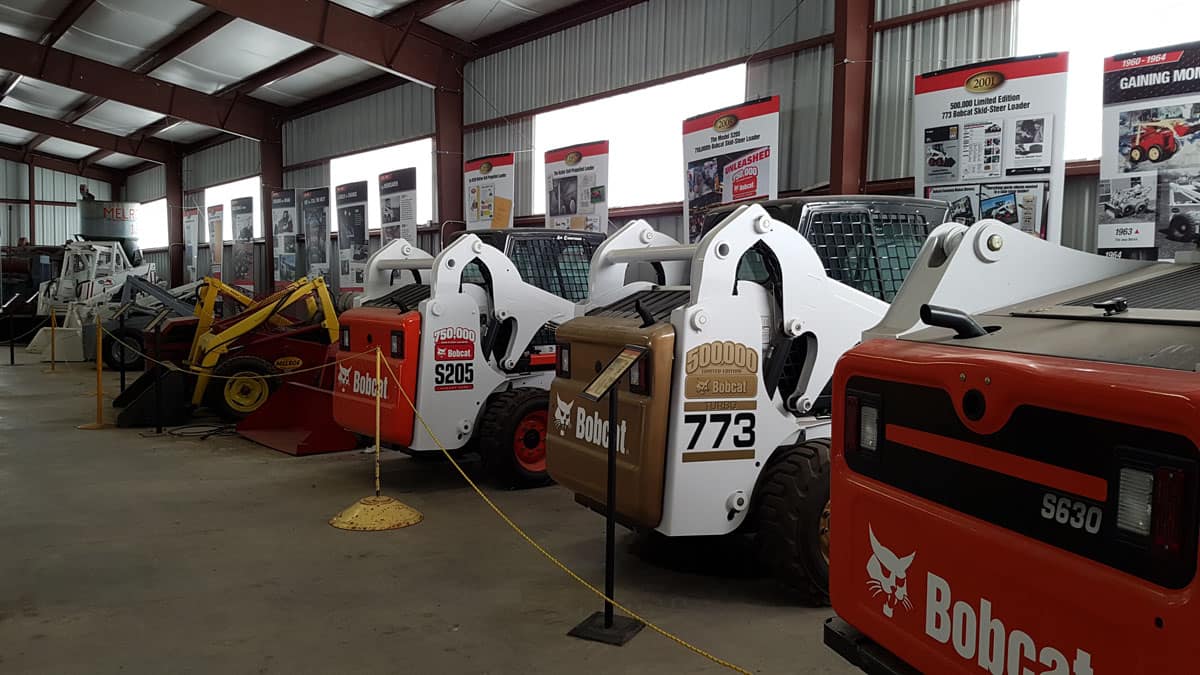 When I visit museums, I’m always looking for pieces a little out of the ordinary. In Bonanzaville, that turned out to be the commercial diary. Did you know that butter was originally packed into square wooden boxes, chilled, then sliced with thin wires (like a cheese cutter) into long thin chunks to sell? I hadn’t!

While I was less fascinated, David spent a lot of time going through the bobcat display (headquarters in West Fargo, ND) in the Melroe Tractor Building. There were lots of machines and information about these skidsteers that didn’t start out quite as small and maneuverable as they are today.

Another favorite for both of us was the Moum Agricultural Building, where the world’s largest bulldozer, and the first Steiger tractor ever built, sat. The bulldozer fascinated David, as he’d already heard many stories about it working in the coal fields back in Saskatchewan, in Estevan. And of course, for a boy who grew up on the farm, the Steiger (originally built in Minnesota, but headquarters moved to Fargo in 1969) was something he had to check out. 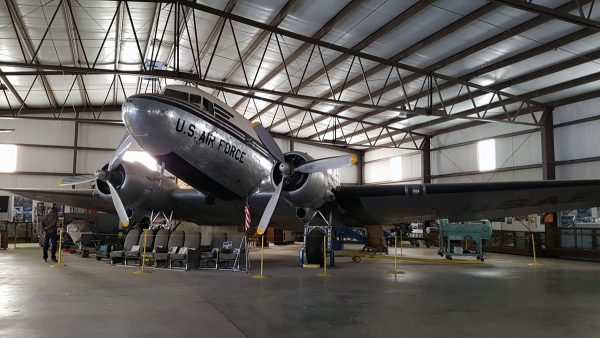 The Bonanzaville museum showcases more than agricultural and rural history. It also has 20+ planes in the Eagles Air Museum, dating from 1911 to 1975. “The Governor’s Plane,” a C-47 that flew in the D-Day invasion, is its main attraction. Fargo has been home to an air force base, the 119th Wing (119 WG) squadron, for 60+ years.

Find Adventure on the Missouri River on a Riverboat

Find travel adventures as they were in the 1800s on the MIssouri River, in Bismarck, North Dakota, on the Lewis & Clark Riverboat.

Theodore Roosevelt ranched in the Badlands of North Dakota, describing the country in vivid detail in his 1885 book, Hunting Trips of a Ranchman. That was, of course, before he became the 25th Vice President of the United States (1901) or the 26th President...
Read More

The photo in the header above was taken by Linda Aksomitis on the Bagg Bonanza Farm in Mooreton, North Dakota, USA. It shows the Main House (circa 1870s), the foreman’s house with the attached farm office, and the laundry building. 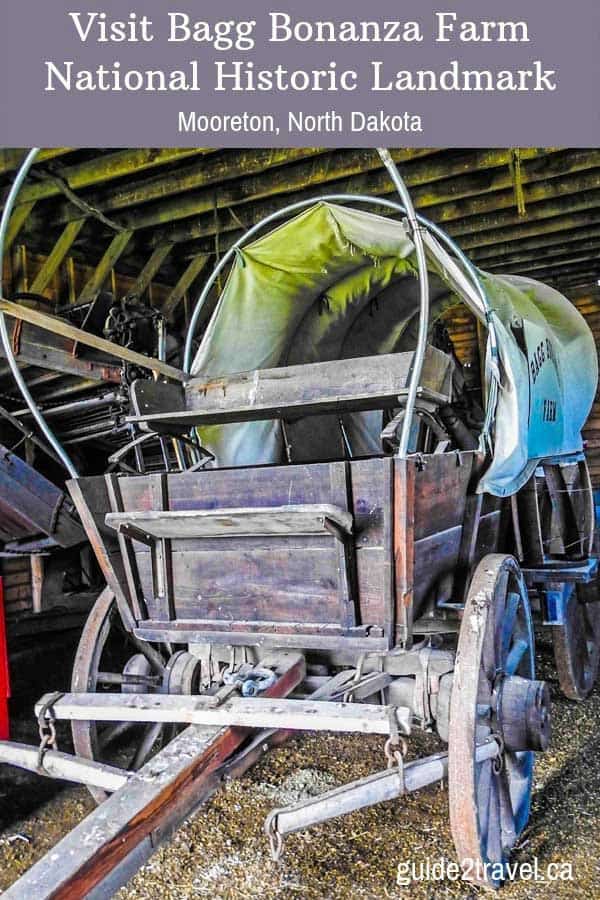 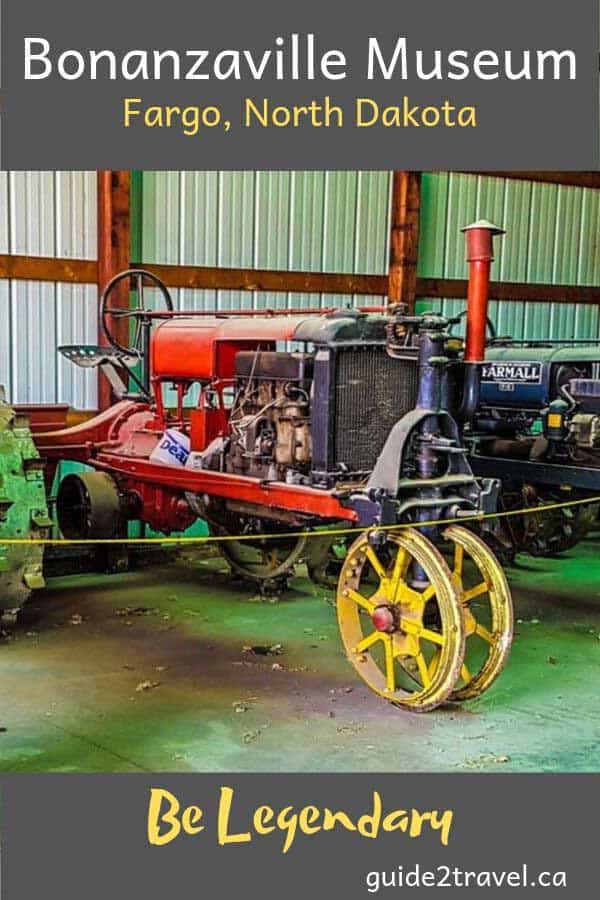 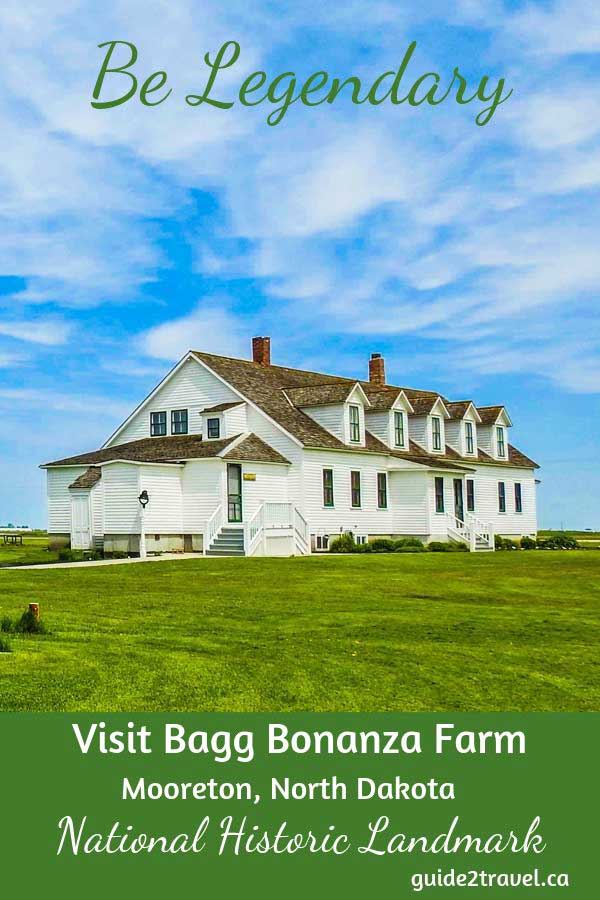