Visit the Colorado Cabin That Grew Into Bishop Castle

Bishop Castle has been under construction for some 50 years — since the spring of 1969. It sits, not on a sea coast, but high in the San Isabel National Forest in southern Colorado where rocks are plentiful. Indeed, when Jim Bishop started mortaring rocks together back then his goal was to build a traditional stone cabin. But his ideas grew into something bigger, and despite continuous opposition to his plan, he’s not about to abandon his dreams. 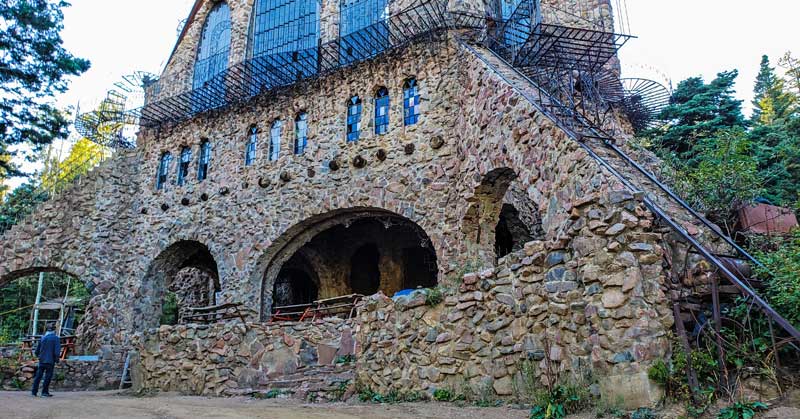 The stone cottage that grew into a castle.

When kids get their first jobs delivering newspapers and mowing lawns, the money they earn rarely makes it to their bank savings accounts. But Jim Bishop did one better. Not only did he save his nickles and dimes (this was 1959!), but when he was 15 he persuaded his parents to invest $450 dollars he’d saved. They did the paperwork for a 2.5 acre parcel of land in the mountains he loved near Rye, Colorado.

Dreamers, though, don’t always thrive in the school system, especially back in those days. So, after one too many arguments with his teachers, Jim left school at 15 and joined the family business. He and Phoebe were married in 1967, and in 1969, started building their dream cabin on Jim’s land with the help of his dad, Willard.

Ensuring a water supply for the cabin proved to be challenging. However, Willard offered a 40 foot metal cylinder tank salvaged from a welding job, which could serve as a cistern. And, it was big enough that it would only need to be filled a few times a year. Once Jim had covered it with stonework, friends and family all commented again and again that it looked like a castle turret. And soon Jim was thinking of it as a castle turret too! 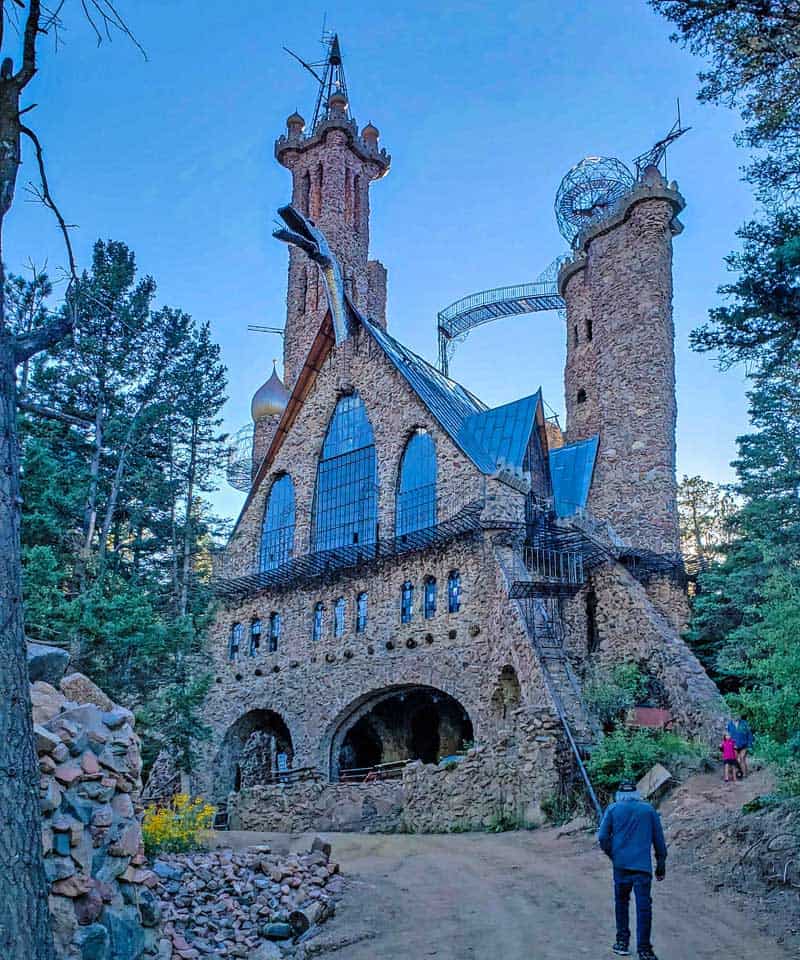 I’ve always loved castles; indeed one of my favorite European trips was a tour of castles in Wales. So when I heard there was a castle in Colorado, I had to add it to our spring road trip!

It was nearly dusk by the time we wound our way up the narrow mountain road to visit the castle. I’d nearly abandoned the idea by then — after all, I suspected it might turn out to be much more cabin or house than castle. Abandoned stone houses are common in Saskatchewan, so I’d already seen a few of them. But we kept on.

We weren’t the only ones, either! A long row of cars clung to the edge of the road, while visitors made their way around the castle.

Most Impressive Parts of the Castle 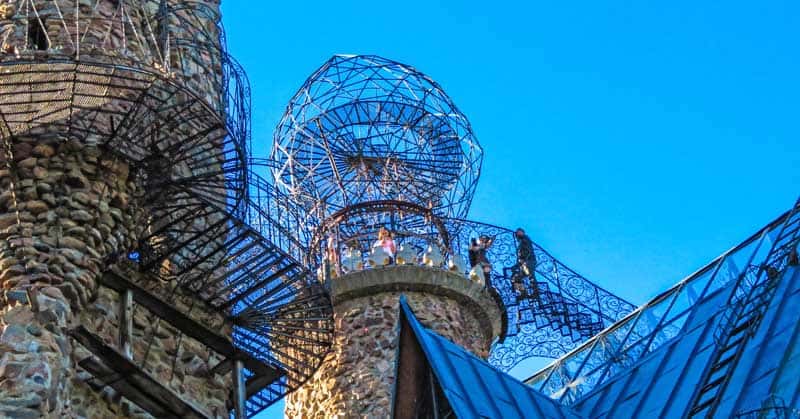 Work area at the highest part of Bishop Castle.

The castle is still a long ways from finished, although it’s certainly an impressive structure already! Towering about 160 feet high or the equivalent of 16 stories above the ground, it’s a long ways to the top.

Visitors can wander through the castle, even climb the ladders and framework used to build the castle. I was shocked to see kids at the very top, although happy to see they were in a cage of sorts to keep them from falling.

Personally, I was mesmerized just walking round and round the man-made castle, staring up at the structure built rock-by-rock! 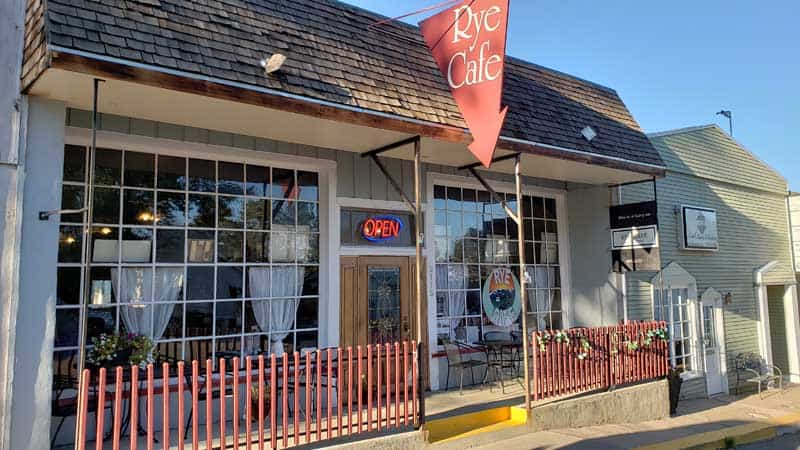 We left Bishop Castle at dusk, headed for the Day’s Inn in Colorado City. However, I’d planned a stop in Rye — after all, we couldn’t drive through a town with the same name as David’s beverage of choice and not take a look around.

Rye was first settled in 1870. Historically, it was known for its dairies and sawmills. Now, with only around 200 residents, it’s more of a quick drive through for a glimpse into the past.

We did get lucky though, and the Rye Cafe, a small mom-and-pop restaurant open a few days a week was open. Some barbeque chicken and baked potatoes later, it was on to relaxing for the next door on a road trip.

Bishop Castle on the Web – Read all of Jim Bishop’s story!

More Places to Visit in Colorado and Utah

The photo in the header above was taken by Linda Aksomitis at Bishop Castle, near Rye, Colorado, USA. 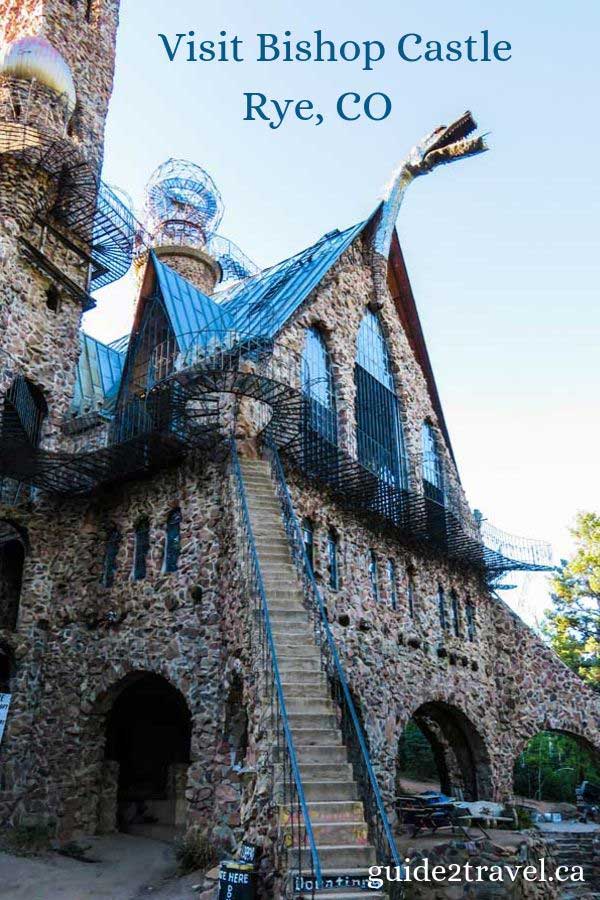 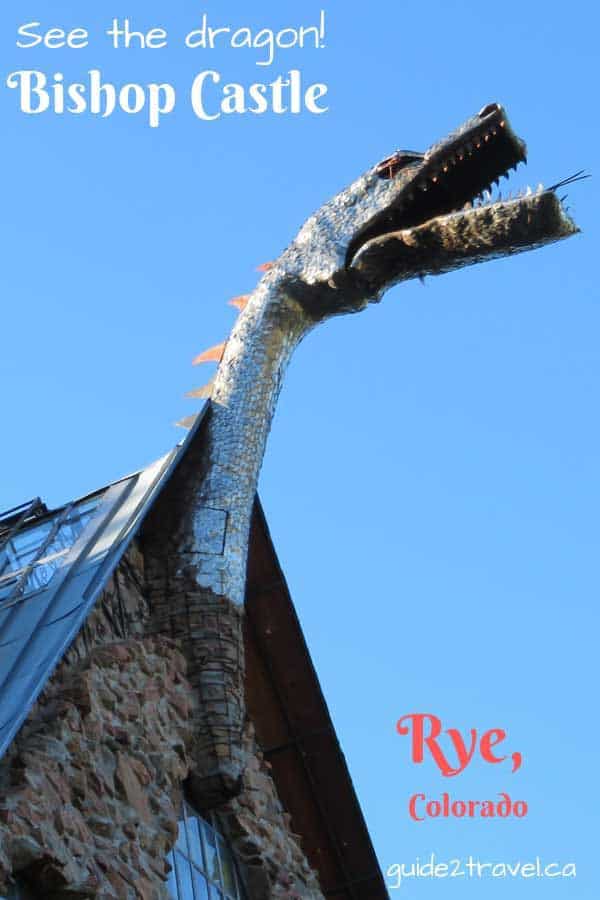