...travel adventures with a twist of history Latest ArticlesAdventures
;
The Fagen Fighters WWII Museum sets out to “connect the latest generation with the greatest generation.” While the museum’s location, Granite Falls, Minnesota, may seem an unlikely spot, the reason is easy. Ron Fagen built it as a tribute to his late father, Raymond Fagen, a veteran of WWII who fought in Normandy on D-Day. 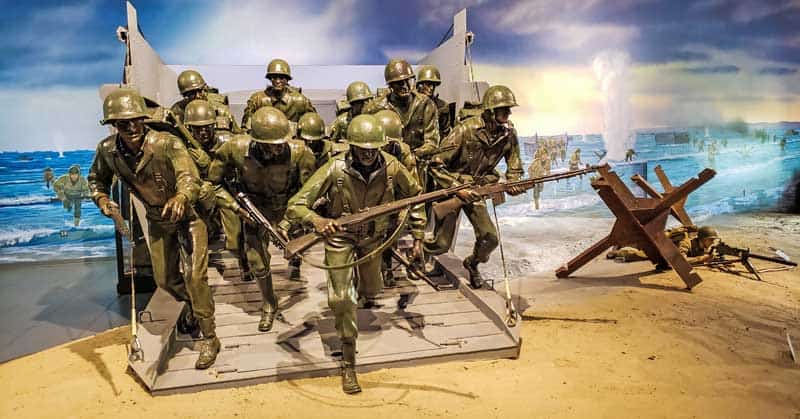 Visitors to Fagen Fighters WWII Museum D-Day Exhibit can’t help but feel they’ve had a flashback in time to June 6, 1944, D-Day. David and I certainly did, even before we learned the details about the scene.

Before us, a dozen bronze sculptures of United States Army G.I.s charged out of a U.S. landing craft onto sand. The sand, we learned, was real sand brought from Utah Beach in France. Behind the beach, dozens more soldiers seemed to follow them out of the sea and sky. The soldiers, one depicted as Raymond Fagen, carried rifles. The scene seemed so real, I could almost hear water lapping on the beach, men’s feet thudding onto the ground, and gunfire, from a soldier flopped on his belly in the sand.

While the WWII artifacts certainly created the bulk of the scene, it was the wall mural by Nebraska artist, David Reiser, that completed the time machine. 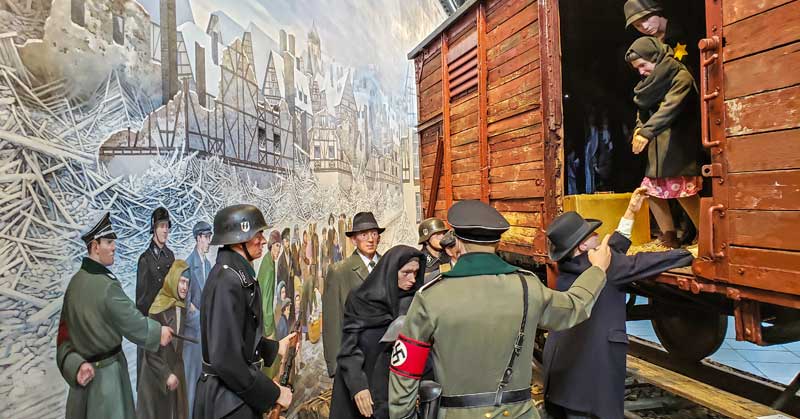 Telling the Holocaust story isn’t easy, but Fagen Fighters WWII Museum does it with simplicity and honesty. Just like the D-Day display, they use life-size statues, artifacts and the artwork of David Reiser.

The key artifact here is an 1899 railroad boxcar used to transport Jews throughout the war. Indeed, the museum added it to their collection to honor the victims of the Holocaust. Next to the boxcar, a soldier, red Nazis arm band standing out against the green of his uniform, directs the removal of a woman from the boxcar. On the opposite side of the train car another scene of POWs plays out.

Information panels give details that include dates, important events, photos and quotes from victims of the Holocaust. A few years earlier, we’d visited Auschwitz and Berkenau, and found the depiction here authentic and moving. If Poland isn’t on your future list of destinations, we highly recommend a stop at Fagen Fighters museum. 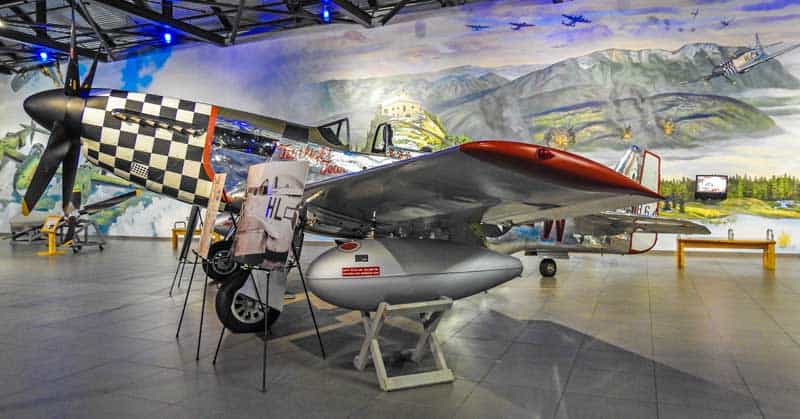 The Fagen Fighters World War II museum began, as all collections do, with a single item. It was a P-51 Mustang airplane purchased in November of 1994. Other planes followed, which now fill the Fighters Hangar.

Other notable planes here include a P-40 Warhawk and Republic P-47 Thunderbolt, along with a Scat III, built in 1945. Next door, in the Training Hangar, you’ll see a Ryan PT-22 training craft used by the US Armed Forces beginning in 1941.

As well as artifacts, the museum shares stories of the brave men and women who fought World War II. One I found particularly interesting was that of legendary aviation pioneer, Lt. Col. Jimmy Doolittle. He led a 1942 raid on Tokyo just four months after the attack on Pearl Harbor with its devastating losses. Although all the planes were lost, 69 of the 80 airmen survived the raid that inflicted damage on both military and industrial targets. The mission served to boost American morale.

While seeing the planes against the beautiful mural backdrops is great, you can also see them fly! Indeed, the museum has regular airshows where these warbirds take to the skies. We just missed the one commemorating the 75th anniversary of D-Day on June 6, 2019.

More at the Museum 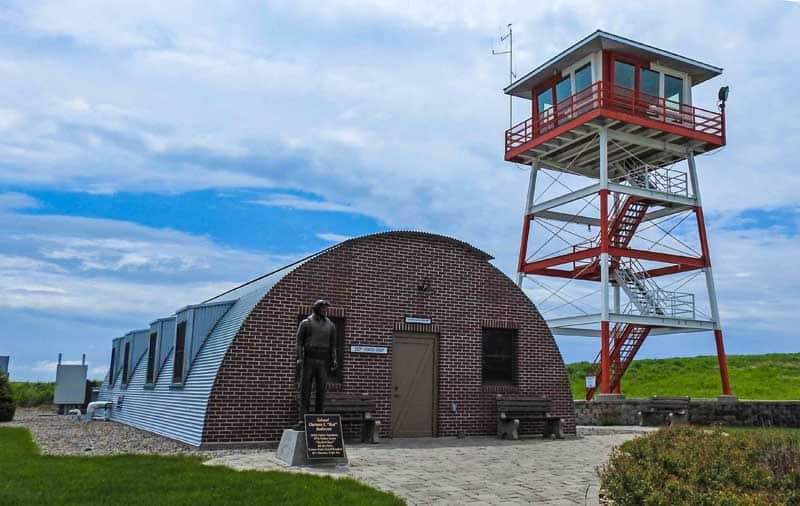 In between the Fighter and Bomber hangars, you’ll even see a recreation of the 357th Fighter’s Group Briefing Quonset in Leicester, England. Next to it, there’s a control tower I climbed to get a view of the whole complex and hangars. 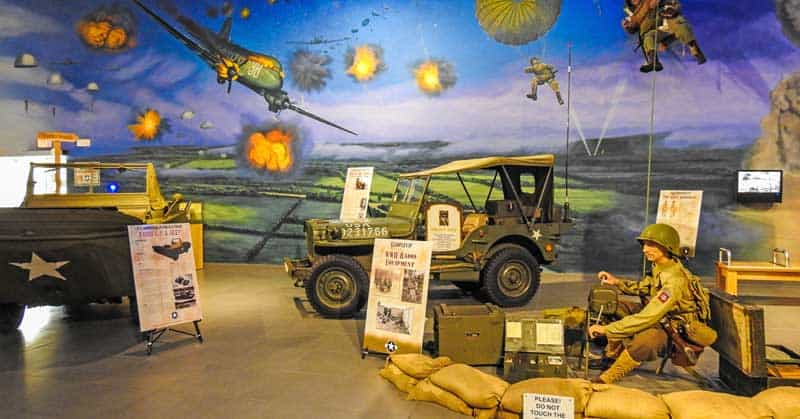 In addition to airplanes in the hangars, we found a number of interesting military machines at Fagen Fighters World War II Museum. These included an anti-aircraft halftrack, General Omar Bradley’s D-Day Willy Jeep, a Harley Davidson WLA Escort Motorcycle, and a D-Day Veteran WC-54 Dodge Ambulance, a CCKWX troop carrier (better known as a Deuce and a half truck), and a Cushman Model 32 Scooter.

The Fagen Fighters World War II Museum is owned by Ron Fagen, who started a construction company in 1974 after serving in Vietnam. Today, the company that bears his name, and of which he is CEO, is the 30th largest contractor in the U.S., and the 68th largest in the world, according to MidwestFlyer.com. Credited with building about 80% of the ethanol plants in the United States (something over 100), he recently completed a 55 million gallon ethanol plant in Hungary.

The museum doesn’t have an admission fee. Instead, there’s a suggested contribution of $10 per person.

For more information about visiting the museum, see: http://www.fagenfighterswwiimuseum.org/

More Things to See in Minnesota

Shopping doesn't have to be stressful -- in fact, it can be just one part of a great getaway in Minnesota. Located just 15 minutes from downtown Minneapolis and St. Paul, Bloomington's Mall of America® is a destination with tons of things to keep every member of the...
Read More

The photo in header above was taken by Linda Aksomitis in the Fagen Fighters WWII Museum in Granite Falls, MN. It’s part of the Holocaust display. 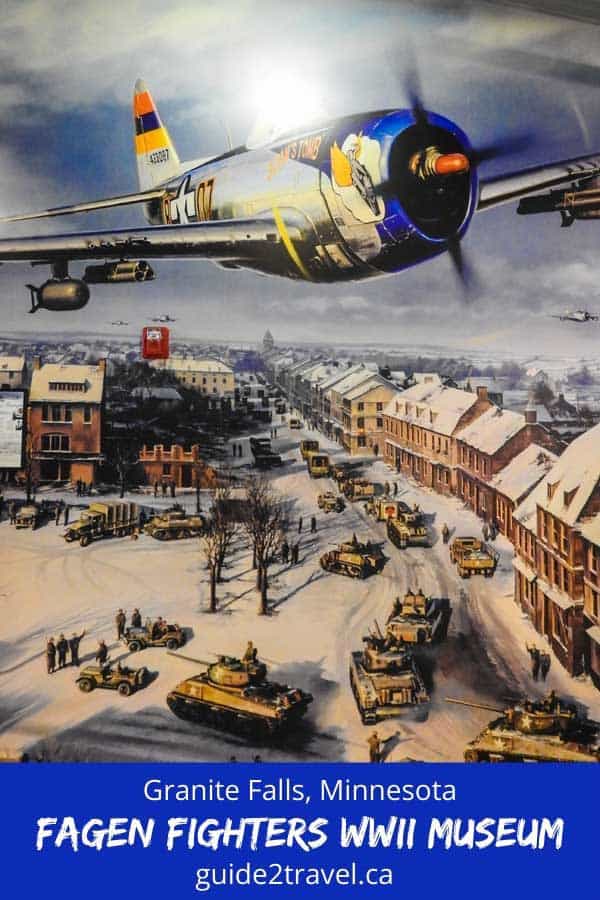 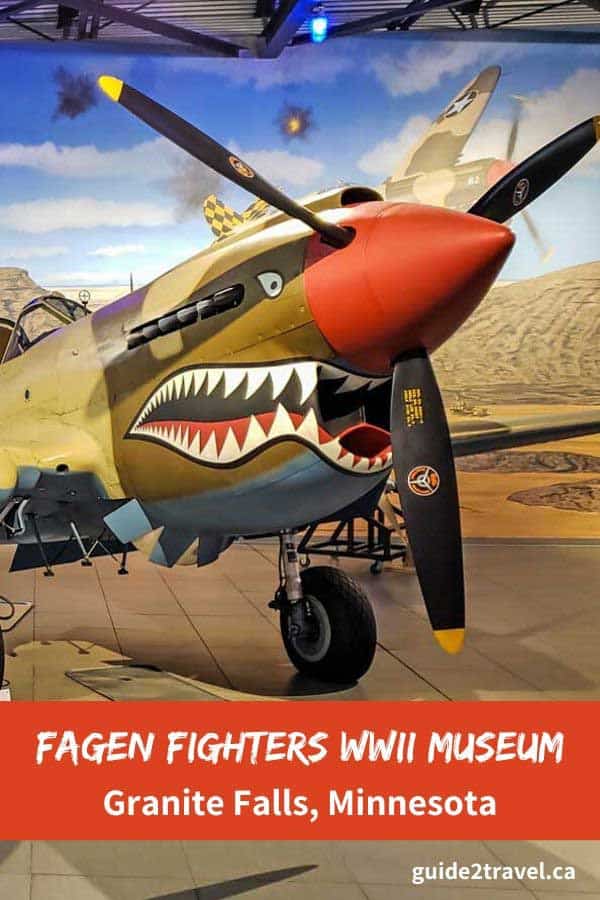 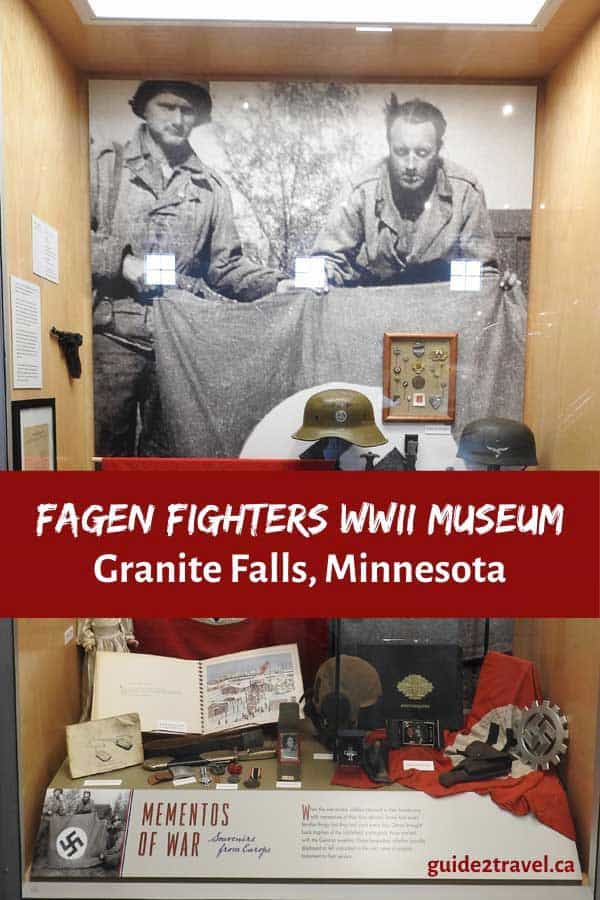