...travel adventures with a twist of history Latest ArticlesAdventures
;
Whistler is much more than a ski resort. Located 120 kilometres north of Vancouver, this mountain town in the heart of British Columbia is famed for its friendly locals, stunning natural beauty and snow-filled winters.

While Whistler is great to visit at any time of year, it is particularly magical during the holidays. Each December, the village twinkles with streams of multi-coloured lights as locals and tourists browse shops, head onto the slopes and crowd around one of the many patio fire pits. But there’s much more to Whistler than just skiing.

We’re channelling our inner Charles Dickens to help you enjoy a trip filled with Whistler’s past, present and future. Surely even Ebenezer Scrooge would have fallen in love with Whistler. 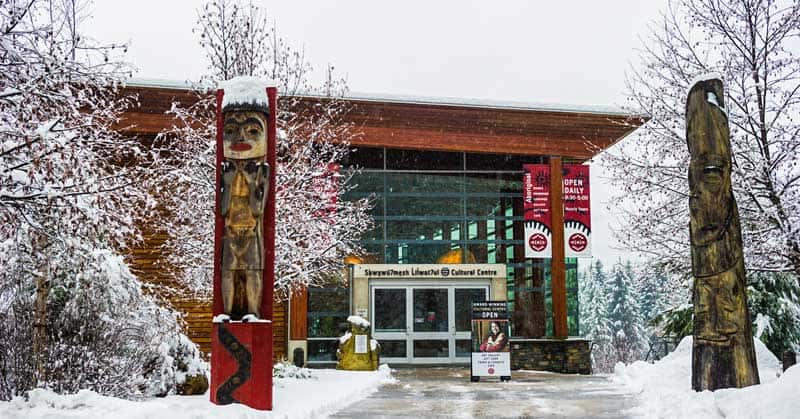 Like A Christmas Carol, we start our journey in the past and there are a number of museums and galleries where you can check out Whistler’s history for yourself.

To learn more about the indigenous history, head to the Squamish Lil’wat Cultural Centre. The centre hosts a number of special events over Christmas and it’s the perfect time to cozy up with a Kanata blanket. These colourful, woven blankets were commonly used as gifts by the First Nations people and make a great souvenir. 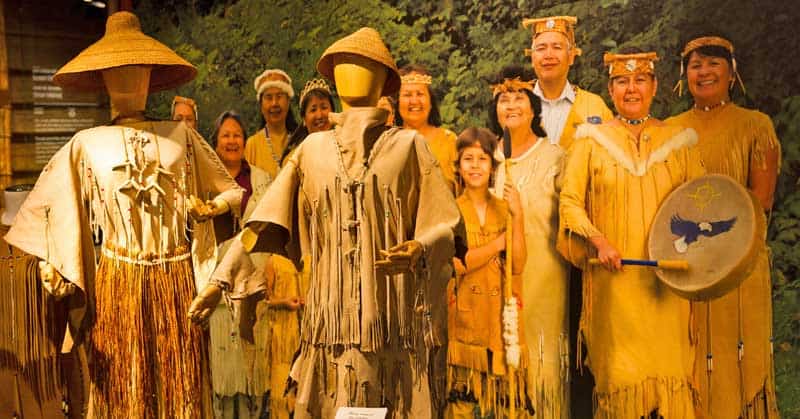 Alta Lake was the original name given to this area before the shrill whistle made by local western hoary marmots inspired a change to “Whistler”.

During the early 1960s, Whistler began its long journey to host an Olympic Games, becoming a ski resort in 1966. However, it would be many years before the town became an official venue for the 2010 Vancouver Olympic Games. The legacy of these games is evident in a number of areas from the Olympic Plaza and Olympic Rings through to the Whistler Sliding Centre.

The Whistler Museum is a great place to learn more about the town’s modern history including the creation and construction of the resort. Look out for one of the first gondola carriages on display here. Finally, the Audain Art Museum is home to a permanent collection of art from across British Columbia including 19th and 20th century First Nations masks. 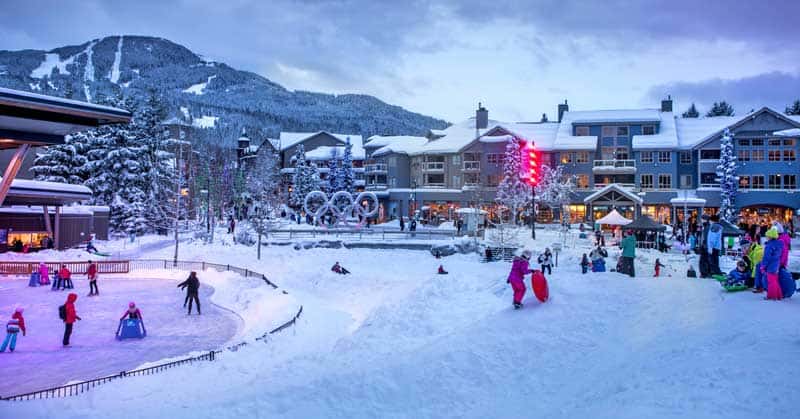 After all that history and culture, it’s time to get into the festive spirit by enjoying some of the epic winter-themed activities on offer today. After a busy day skiing or snowboarding, opt for one of these alternative ways to apres.

Whistler sleigh rides are unsurprisingly one of the most popular festive activities. The Christmassy tour takes in the views of Blackcomb Mountain and the trails are lit with festive lights. Stop off at a cozy cabin en route where you’ll find some of the tastiest hot chocolate around. 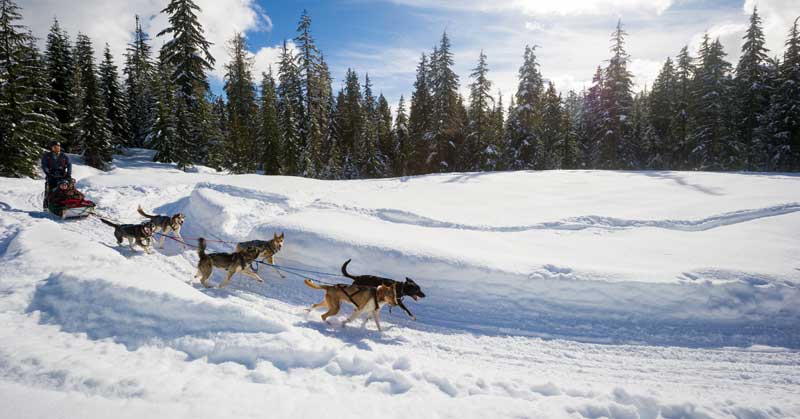 Staying with traditional transportation, dog sledding is a practice that goes back thousands of years. The Callaghan Valley is one of the most spectacular places to enjoy the thrill of a dogsled and, interestingly, the valley has its own unique microclimate surrounded by a circular rampart of five mountains.

Professional mushers will teach you the commands and even show you how to harness these hardy dogs. As this is an extremely popular Christmas activity, pre-booking is essential. 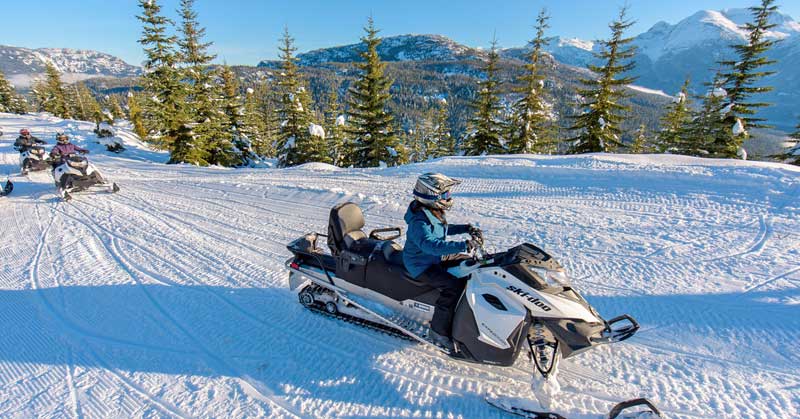 Snowmobiling on the snowmobile trails in Whistler. Photo from Tourism Whistler.

If horsepower of a different kind is your preferred method of transportation, try snowmobiling. Everyone over the age of 16 can give this activity a try so it’s ideal for those families with older children to take a ride on a snowmobile. The ploughed backcountry roads around Cougar Mountain are the ideal place to steer these exciting machines. 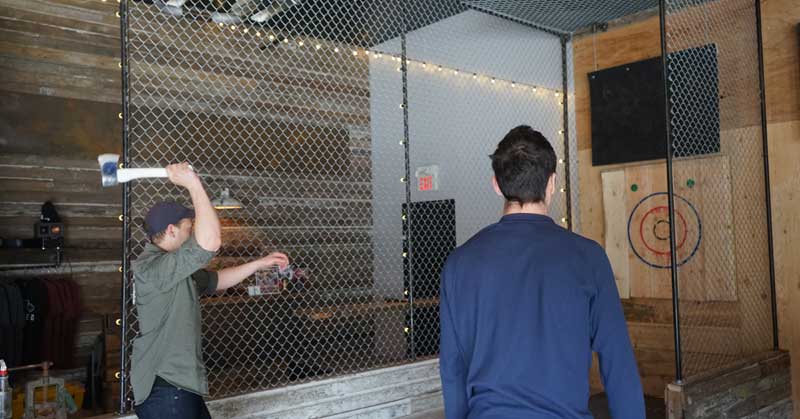 Woodland lumberjacks were once an essential part of life in British Columbia and they have left their mark on Whistler in a rather entertaining way. Forged Axe Throwing has brought the much-loved pastime of axe throwing into the present day, allowing guests to try their hand at this entertaining sport. Woodland loggers would throw axes at targets to test their aim and brighten up long days in the forest.

Today, axe throwing is one of the top indoor activities in Whistler, so you can test your aim in the warm and dry. Ditch the festive board games and throw axes instead. 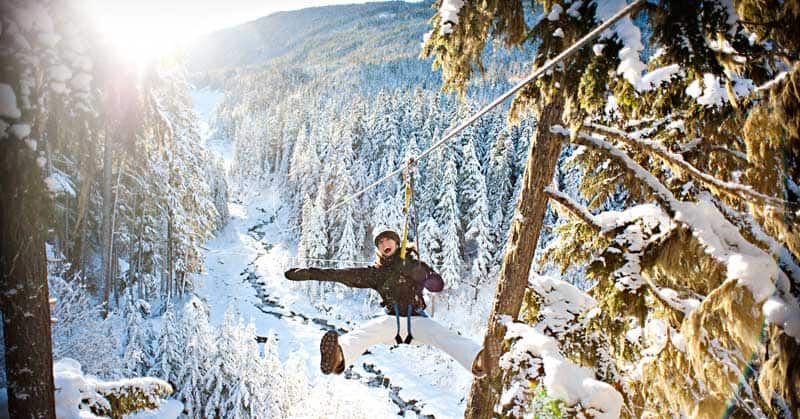 For one of the more exciting and adrenaline-fueled forms of sightseeing, ride a Whistler zipline. Superfly has designed and built one of the best zipline adventures in the world with two of Canada’s longest ziplines at over 1km long. Set 200m high above the valley floor, you’ll reach speeds of 100km/hour in a way matched only by Santa Claus and his reindeer. Keep your eyes open and enjoy the stunning views of snow-capped firs and breathtaking mountain vistas.

Finally, the Vallea Lumina night walk promises a journey for the senses. This multimedia experience follows the path of two bold adventurers who, according to legend, discovered a magical light-filled valley in the forest. The tour is lit with stunning illuminations and displays and is ideal for families visiting during the holidays. 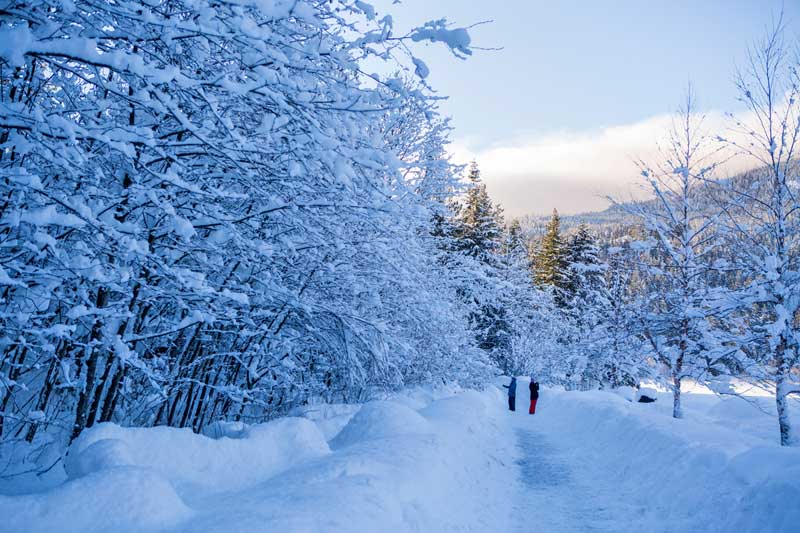 Whistler is already looking to the future, and with good reason.

Looking after the environment is in the interests of us all but here in Whistler, it is especially vital. Whistler’s winter season depends on reliable snowfall after all, so global warming poses a significant threat. While planet-friendly changes may be high on all our new year’s resolutions in 2020, Vail Resorts (owner of Whistler Blackcomb) has already started to take action.

The company has launched a sustainability initiative, an Epic Promise for a Zero Footprint, with a goal of eliminating carbon emissions, waste production and environmental impact by 2030. The local authorities in Whistler have also taken action to reduce carbon emissions and businesses and residents have gotten in on the act too. Guests visiting Whistler this season will find a number of small carbon-cutting changes that collectively, could make all the difference.

The Fitzsimmons micro-hydro renewable energy project is one way to see Whistler’s future in action. The hydro plant at the Fitzsimmons River produces enough electricity to match the total energy consumption of both the resort’s winter and summer operations. That’s enough to power 269 snow cannons, 37 ski lifts, and 17 restaurants. 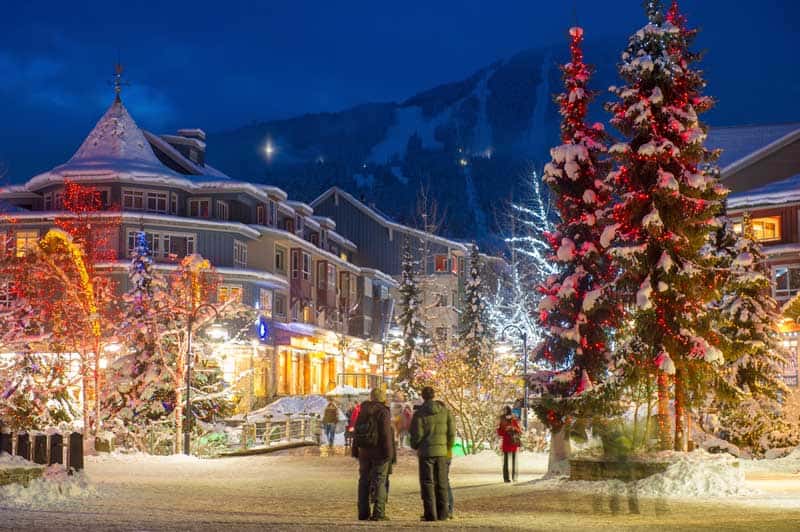 Such changes are vital for us to be able to enjoy snowy Whistler winters in the future and truly magical Christmases in the mountains.

Be warned though, spending Christmas in Whistler is likely to have you yearning to return. In the future, keep your eyes peeled during the summer months for those early-bird discounts on Whistler accommodation and passes.

Rachael Hopwood is a freelance travel writer specialising in travel.

The photo in the header above is of Christmas in Whistler, British Columbia, Canada. Photo credit to Tourism Whistler.

Rachael Hopwood is a freelance travel writer specialising in travel. 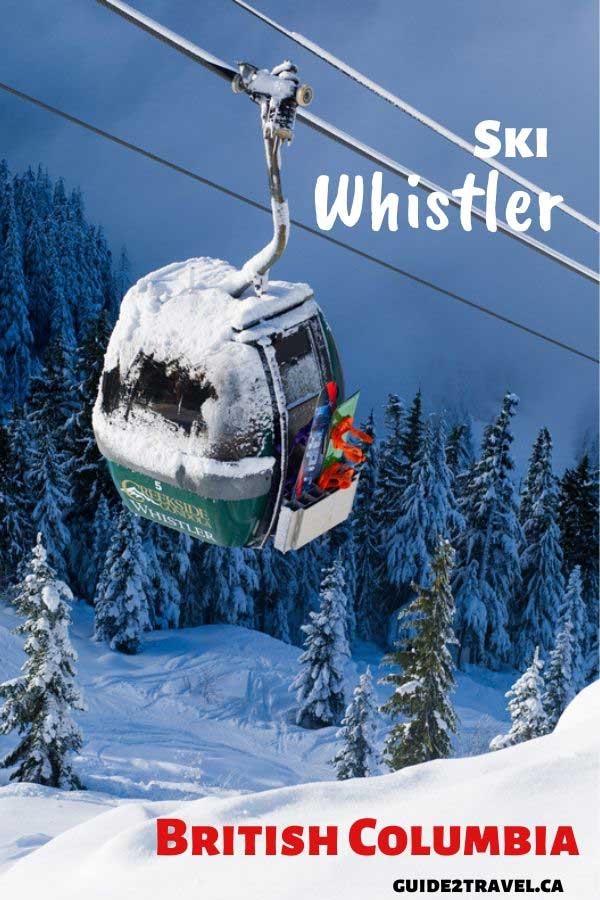 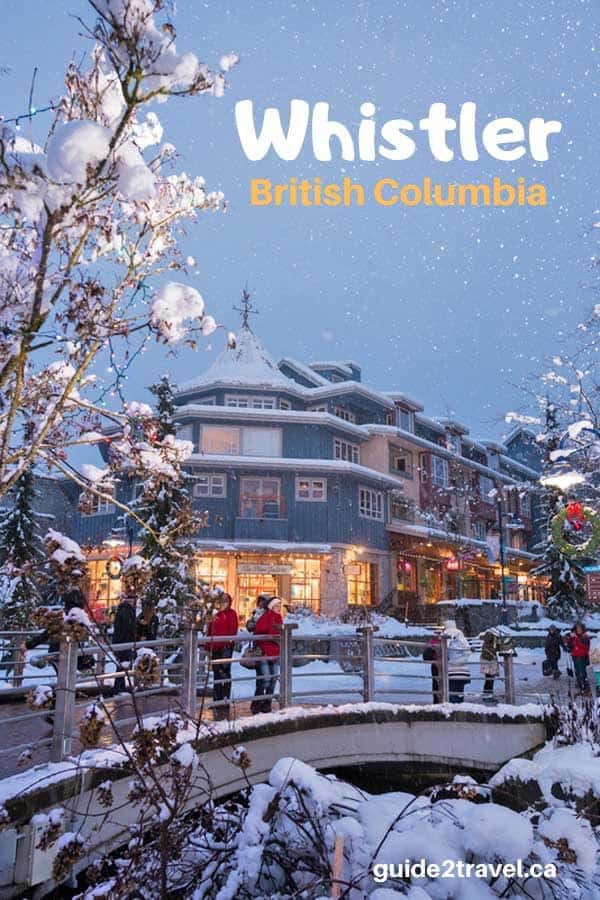 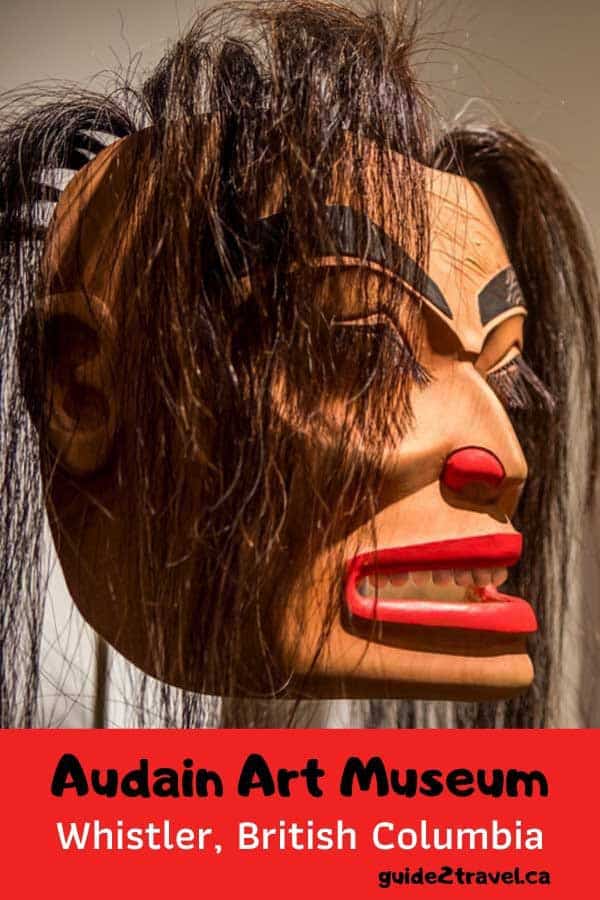