Chicago can be summed up in three words — architecture, culture and food — but you will definitely need more than just three days to take it all in. Here are some great things to do in Chicago when you visit, whether you’re enjoying a walk or driving. 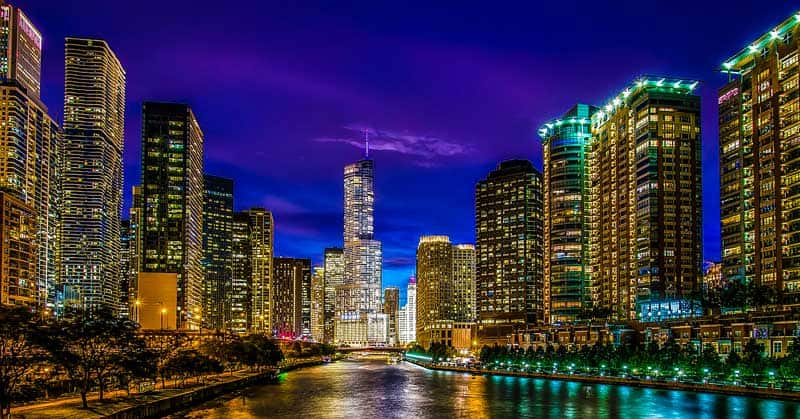 Chicago city proper has a population of about three million, over nine million when suburbs are included. Made up of 77 unique neighborhoods, the best place to orientate yourself is the Chicago Architecture Center. Newly opened on Michigan Avenue in 2018, it has a large scale interactive model of the city that illuminates everything from the location of key historical events and buildings in the city’s development to bike friendly routes.

The building also houses models of skyscrapers from around the world, with Chicago considered their birthplace with construction of the 138 feet, 10 storied Home Insurance Building in 1885. The Center offers 85 unique tours of the city from Historical Treasures to their famed river boat tour, all led by knowledgeable docent guides. 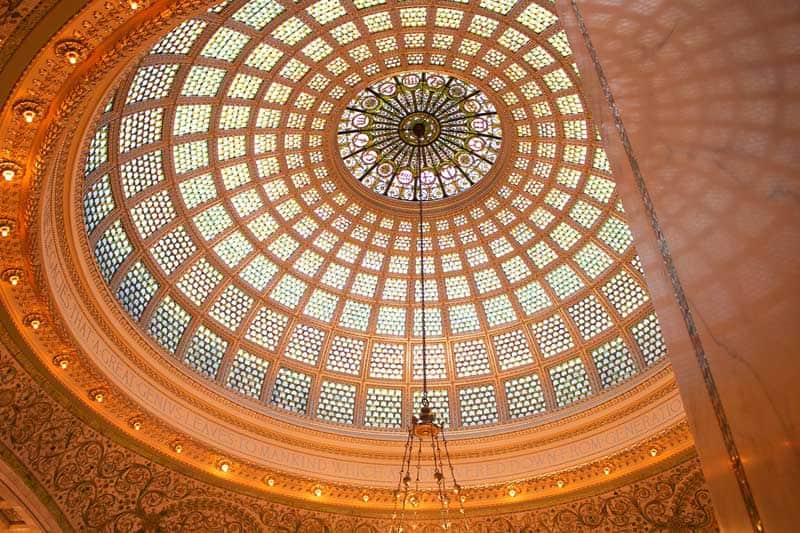 Dome ceiling in the Chicago Cultural Center. Image by Paola Sanchez from Pixabay

Another early stop should be the Chicago Cultural Center (CCC). Built in 1893 for two purposes — a library and a war memorial — it’s now a worthy destination just to see the restored Tiffany glass dome, the largest in the world and valued at over $30 million. Evidence of literary history exists throughout, with famous names like Shakspeare (the original spelling) to Plato, imbedded in the marble arches.

The Center is also the start point of free Greeter tours, offered through the city’s tourism board, Choose Chicago. There’s a one hour Instagreeter offered Friday to Monday.

Plan ahead and create your profile on the Choose Chicago website and a volunteer best suited for your particular needs and interests will take you on a customized exploration of the city for two to four hours. 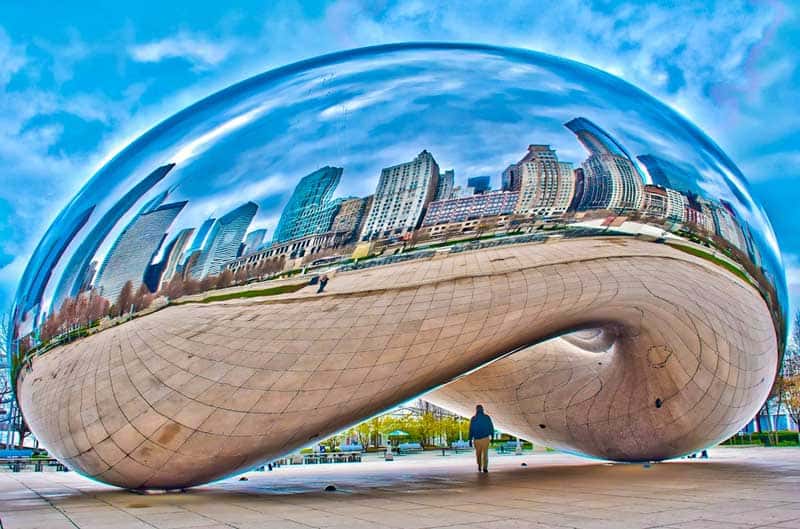 The Chicago Loop is the second largest commercial business district in North America (after Midtown Manhattan), plus contains the city’s highest concentration of tourist attractions. It’s easily navigated on foot or by taking the elevated train line, referred to as the “L”.

Millennium Park is 24.5 acres in size, but the Cloud Gate, or The Bean, is just across Michigan Avenue from the CCC. Don’t miss out on walking under the steel structure and looking up for the tornado effect.

The Pritzker auditorium, a large outdoor amphitheater, is located adjacent to Cloud Gate. If you’re lucky, you may be lucky to catch a concert on the Frank Gehry designed stage!

Further south on Michigan Avenue is the Art Institute of Chicago, a must visit destination for their vast collections from Impressionism to Roman artifacts. 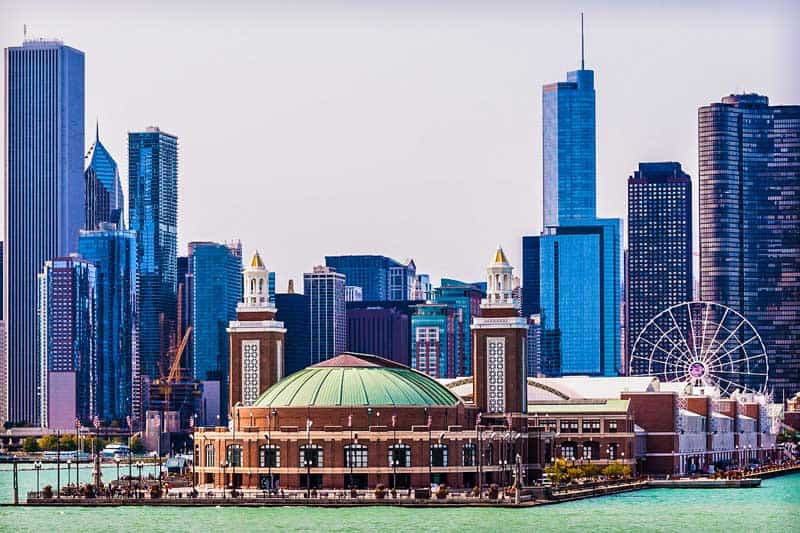 Navy pier in Chicago. Image by Morris Sneor from Pixabay

The city is divided from east to west by State Street. The east side spans only to the shores of Lake Michigan, which is where you will find Lakefront Trail, 30 km of paved pathway for active pursuits along with other tourist attractions such as Field Museum, Shedd Aquarium, Adler Planetarium and Navy Pier.

Madison Avenue divides the city from north to south. The Chicago River takes a 90 degree turn in the heart of the city, complicating directional landmarks, but just follow the shore side Riverwalk to see breathtaking buildings from a different perspective.

Cross north to River North and Streeterville, known for shopping or cross west to West Loop/Fulton Market, the old meat packing district being converted to lofts and cool restaurants. For panoramic views, head up at either 360Chicago on Magnificent Mile or Skydeck at the Willis Tower downtown. 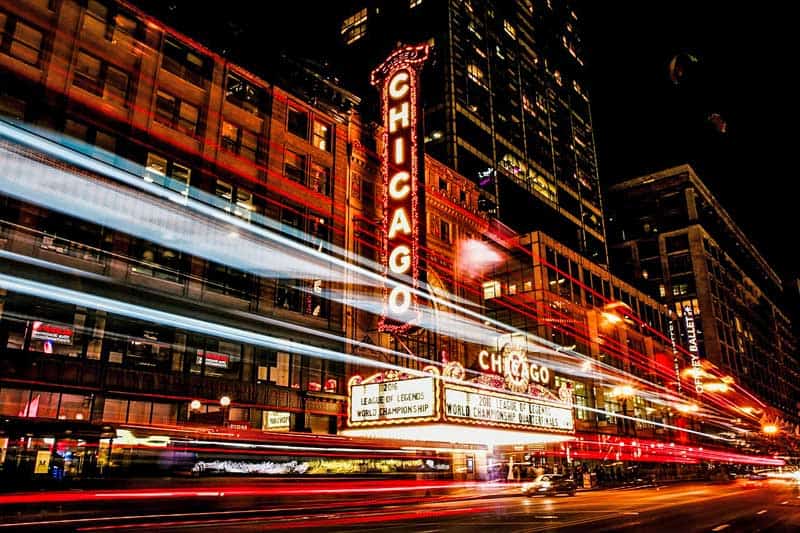 Chicago is home to over 200 entertainment venues. You can find comedy at Second City, opera at the Lyric, Broadway at Chicago Auditorium, performing arts at Harris Theater and interactive Blue Man Group at Briar Street Theatre, just to name a few.

Combine a meal with a burlesque show at Untitled Supper Club, live jazz at Catch 35 or let the outrageous food presentation itself be the entertainment at Barton G.

These are some great places to eat!

Food is a quintessential reason to visit Chicago. Taking a food tour is a good way to not only eat, but also learn tips from the locals. Chicago Food Planet offers six different neighbourhood walking tours while sampling curated bites.

Bobby’s BikeHike has bike options if you prefer wheels to get around, venture a little further and burn off some extra calories while snacking. Chicago Beer Experience is a good choice for sampling Chicago’s craft beer scene (they are home to 167 breweries) while learning about the criminal side of the city‘s history on their Sins & Suds tour.

If group tours are not your thing, Chica-GO offers personalized tours (in English, French or Dutch) and will take you even a bit further off the beaten path to places including Pilsen, Greektown or Wicker Park.

Planning Your Visit to Chicago

There is no shortage of places to stay in the city. If you are a history buff, the Palmer House in the heart of the Loop, has been continuously open as a hotel since 1875. Nearby options still with proximity to key attractions but further from the noise of the L include the Fairmont or Loews.

If you prefer boutique hotels, 21C in River North hosts an in house contemporary art museum while the ACE Hotel in West Loop boasts large interactive indoor and outdoor spaces for guests to mingle over cocktails.

Some of the activities described in this article were paid for by their providers. However, no portion of this article has been acknowledged and the opinions remain those exclusively of the author. 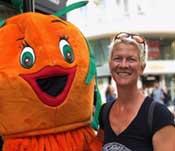 More Places to Visit in Illinois

Check out 10 of the best stops with history to hiking on The Meeting of the Great Rivers National Scenic Byway, one of the 7 natural wonders of Illinois.

The photo in the header above is of Chicago Cloud Gate sculpture in Chicago, Illinois, USA. Cloud Gate is 10 m high and made of 168 steel plates. Photo by Petr Kratochvil

BJ Oudman is a travel writer who has visited 25+ countries. 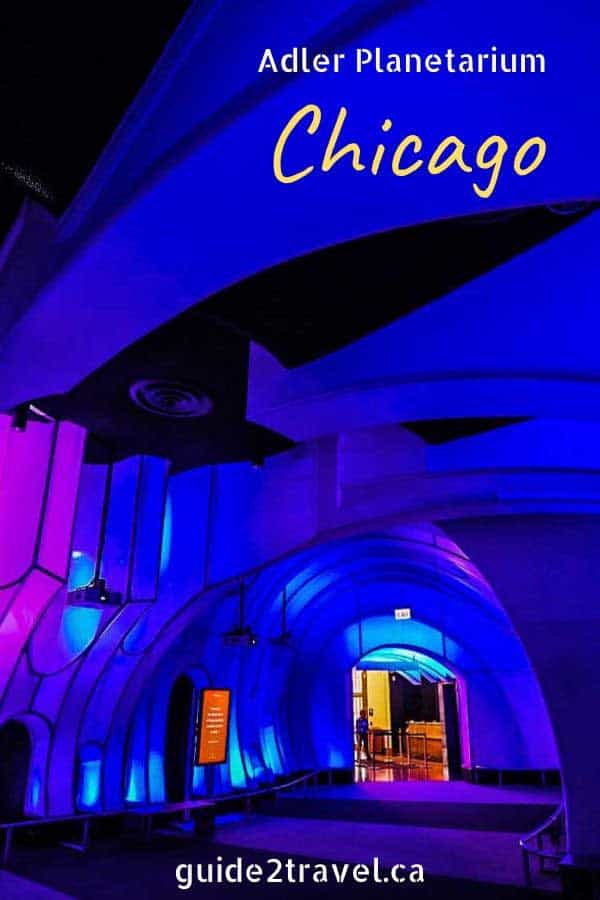 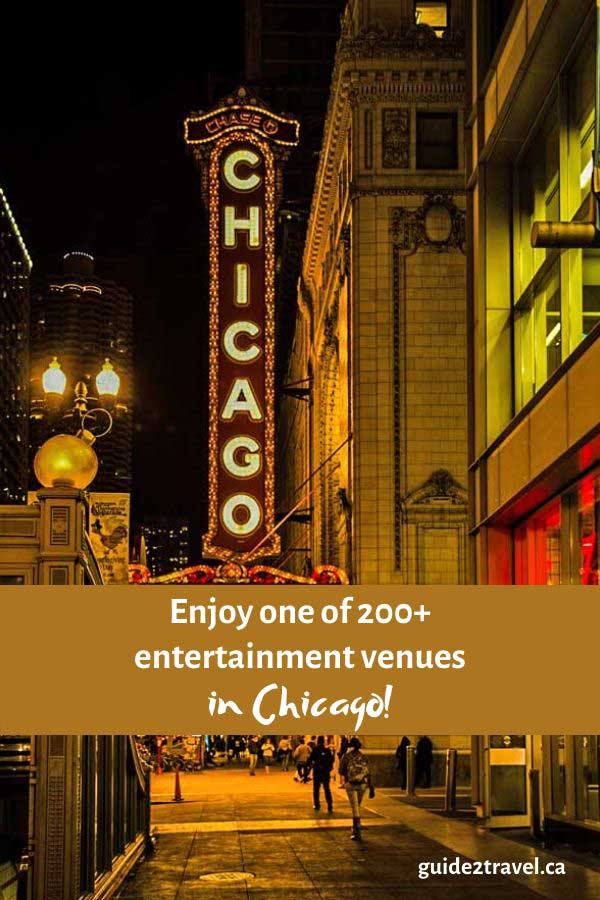 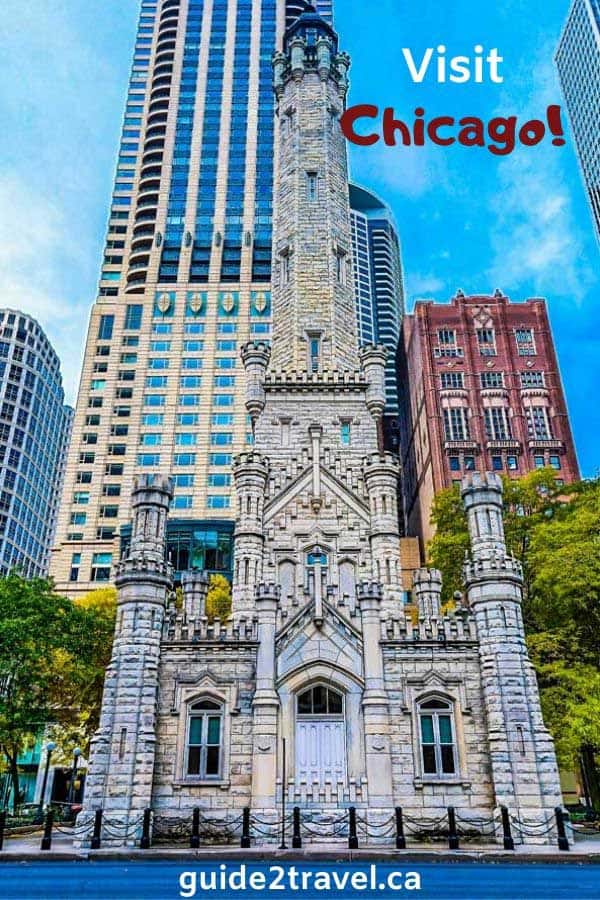