Are you keen to explore the wonders of the fascinating city Kathmandu? If so, here you go. Kathmandu is the capital city of Nepal and is one of South Asia’s most popular cities due to it’s cultural and natural diversity. Indeed, the Kathmandu valley offers a range of activities to travel enthusiasts including the top 10 best things mentioned in this list. 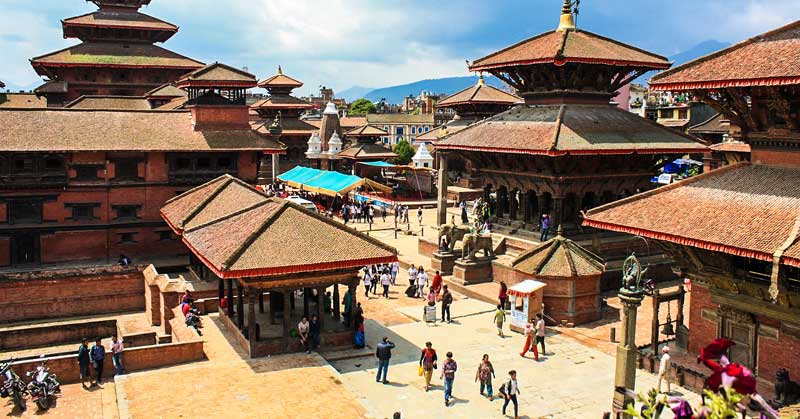 One of Kathmandu’s ancient old cities is set around the Kathmandu Durbar Square at Basantapur, which is also well- known as Basantpur durbar square in its traditional name. South from the major tourist hub of Thamel, it’s one of the more prominent world UNESCO heritage sites out of seven groups of monuments and buildings recognized in Kathmandu valley. Explore the culture or history of Kathmandu by visiting this ancient Durbar Square of Kathmandu valley located in front of the former Kathmandu Palace Kingdom.

The palace presents the beauty of Nepalese culture, where you’ll be able to witness the unique decorations by elaborately-carved wooden windows and panels. It houses the King Tribhuwan Memorial Museum and the Mahendra Museum in the small museum library. However, this temple is one of the iconic spots of the ancient traditional Nepali architecture in its purest form for you to explore now. 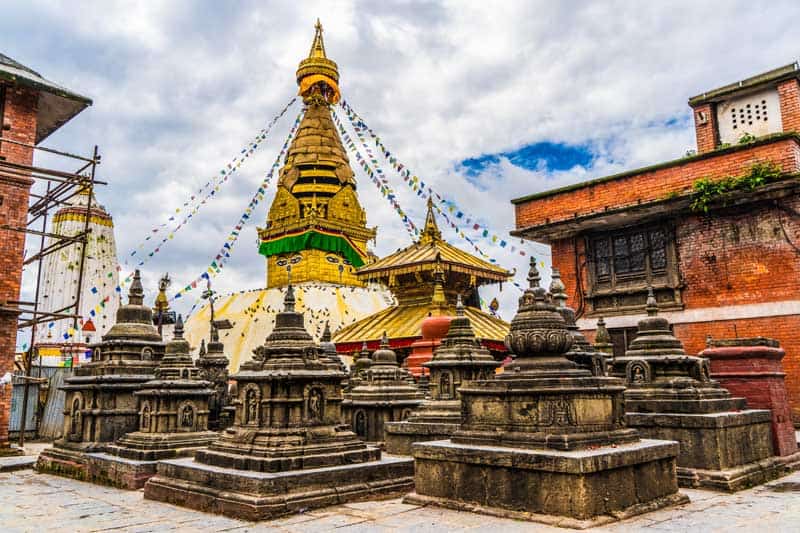 Stupa in Swayambhunath temple, also called Monkey Temple, with traditional “Eyes of Buddha” painting on it and little stone stupas in foreground. Photo by Den.

Swayambhunath Temple is one of the huge white stupas in Kathmandu Valley. It’s well-known as one of the most famous Buddhist temples in Nepal, where you will have an opportunity to explore the significant Buddhist culture. It is said to be built about the 5th century-long- one of the ancient Buddhist architectures as it is recognized by the UNESCO world heritage site.

Swoyembunath temple is not only about Buddhist culture and followers, it’s also a very famous place to witness the sunrise and sunset views over the Himalayas. The white mountains are also visible from a distance, along with the entire valley of the beautiful city of Kathmandu. Similarly, one of the most distinctive features of the Swayambhunath Temple is the monkeys, where you’ll be able to see the different spaces of monkeys around.

If you love to buy handicraft materials, this place is the perfect place for shopping for those items. Around the temple you can find many shops, restaurants, hotels, and cafes. 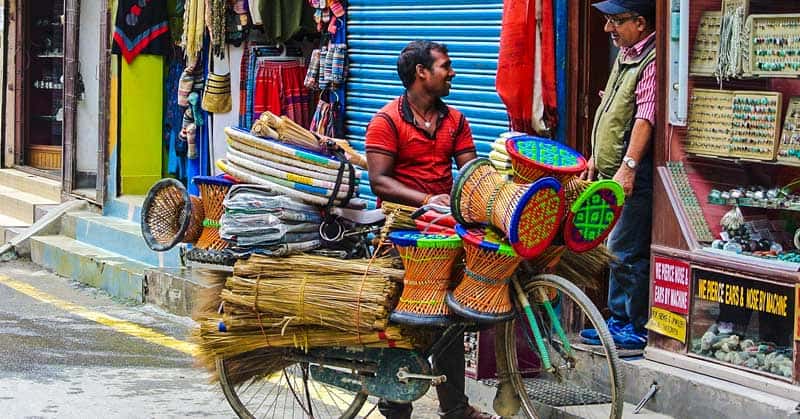 If you are visiting Nepal, you must check in Thamel either for your stay overnight or just for walking around the free street before you kick-off to the destination. Thamel is one of the most beautiful tourist hubs located in the heart of Kathmandu, where you have plenty of options to shop or walk around the beautiful streets.

Thamel has instantly been a distinct tourist district and one of the largest commercial neighborhoods in the town. This place is recognized as Nepal’s epic center of the tourist industry and has been a trending spot for tourism in the Kathmandu Valley of Nepal.

However, Thamel is also known for its night-life, where you can go to the nightclubs to chill out with your friends. To walk around, you’ll be amazed by brightly wheeling prayer flags, and displaying so much local traditional customs on the narrow street around. In common wonder, Thamel is a gateway to trekking in the Himalayas.

Pasupatinath Temple is one of Nepal’s most sacred Hindu temples that is located on the banks of the famous Bagmati River. This temple was built a long time ago and holds a shrine for many other Hindu gods, where thousands of pilgrimages visit from all over the globe.

This temple is perhaps the most interesting Hindu temple in the world which is the largest one in Nepal. The name of Pasupati is dedicated to God Lord Shiva, which is also known as a lord of animals. This temple is officially opened for the public once a year during the Shiva Ratri (The birthday of Lord Shiva).

Likewise, you can visit Pashupatinath every day from 7 am to 10 am to see the cremations. Most of Hindu corpse is cremated with intense Hindu rituals in this temple. If you are visiting in the evening then you can witness the aarti (fire worship) by Hindus.

Boudhanath Stupa is one of the largest Buddhist stupas in the world and it is included in the UNESCO World Heritage Site. It’s located on at an ancient trade route that entered Kathmandu from Tibet region. Boudhnath stupa is a significant place in Buddhism, and architecture where you will get an opportunity to learn so much in depth about the local lifestyle and culture of the Nepalese and Tibetan origin community.

The Budhnatha Stupa is a very popular spiritual place for both international and domestic tourists, where thousands of travelers visit every month. This squad is the perfect place for walking around the main stupa, which offers prayers to their lord here, as the Stupa is considered to be the tomb of the remains of Kassapa Buddha. A beautiful stupa is attached by a lot of legends monks to the place.

It is undoubtedly one of the best places to visit in Nepal.

Durbar Marg is the best place to go for shopping for branded clothing, as it is also known as the cleanest part of the Kathmandu valley located on the north side of Thamel. It’s just 5 minutes away on a walk. The street that runs straight from the Narayanhiti Palace Museum, Durbar Marg is more of a modern street with the fanciest restaurants, clubs, international clothing stores, and footwear brands, along with 5-star hotels, pricey boutiques, and commercial centers that is one of the largest commercial hubs in Kathmandu.

One further thought than this place if you are looking for original international brands, then this place is right for you. However, the prices are similar or slightly higher than in other countries since all the branding goods are imported from China and India.

The Garden of Dreams

The Garden of Dreams is located in between Thamel and Royal Palace on Tridevi Sadak. It’s situated practically opposite the ever-popular Fire and Ice Restaurant and in front of the Himalaya bank and next door to Himalayan Java cafe in Thamel. It is just about 2 minutes of walking distance from Thamel epic center point if you are somewhere around in Thamel.

Garden of Dreams is a neo classical historical garden of Nepal that allows you to chill in the peaceful environment from the hectic life behind the walls. This garden is a popular spot for touring around, coffee, and some quality time with your friends, family, or yourself.

However, this complex garden structure in the heart of Kathmandu is a popular spot, especially for youngsters and tourists, as it offers a very beautiful ambiance and the seating arrangements with a natural girdle while you are in this place. The garden is perfectly decorated with beautiful flowers, architecture, and vegetation plants. It looks so much cooler and admirable ambiances with amazing beauty in the capital city Kathmandu.

The Asan Market is one of the oldest traditional markets in Kathamndu where you find a lot of Nepalese local costumes. This place is a trade center to supply most of the goods to all over Nepal. Asan Bazzar is located at the center point of Kathmandu and it is just 5 minutes away from the tourist hub of Thamel.

Asan has so many wholesale retailers as traders can purchase at a reasonable price to resale the goods in other places. It is one of the most crowded places in Kathmandu valley in terms of the business way.

The Kasthmandap temple is being changed to a to Wood-Covered Shelter (Kastha: wood, mandap: pavilion). This is one of the historical temples in Kathmandu valley.

Kasthamandap has a three-storied public shelter that includes a shrine consecrated to Gorakhnath situated at Maru. However, this ancient building is a testament to its centuries-old architectural style that impressed many tourists to visit here. The beautiful temple was built in the 7th century and luckily it hasn’t been affected by the massive earthquake in 2015. 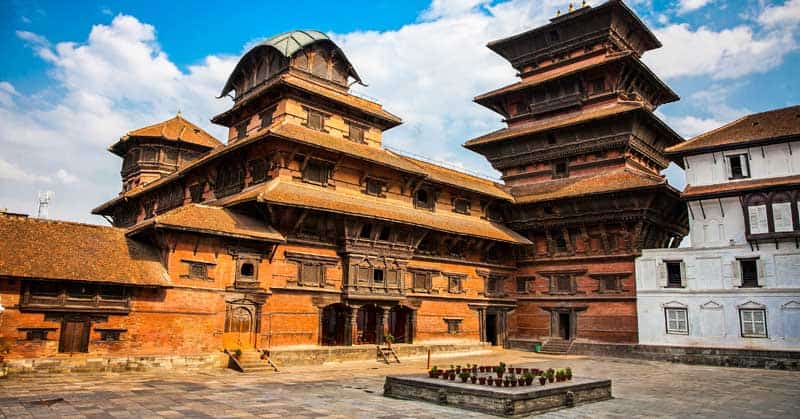 The Hanuman Dhoka Palace gets its name from the God of Hanuman (the monkey god), an ardent devotee for Lord of Rama. The meaning of ‘Dhoka’ by translation is to Door in Nepali and the Hanuman Dhoka has a large standing statue of Hanuman where you can see probably the largest status of the lord Hanuman in the world.

The common name for Hanuman Dhoka is the entry gate to the beautiful palace to witness the standing statue of Hanuman guards. This place was built by Malla king about 5 years ago.

Dil Gurung has always had a deep passion for travel. His upbringing being surrounded by traditional Nepali customs and culture led him to develop a true passion for exotic cultures around the world. He has done the Annapurna Base Camp Trek and most of the places in Nepal, and has grown to love the amazing beauty and serenity Nepal possesses, in terms of its diversity in all known aspects. Correspondingly, he also likes to document his travels and share his experiences with everyone. He feels it’s always fun to learn new things about places he hasn’t yet been to, while at the same time writing about his experiences as he travels.

More Places to Visit in Nepal and the Himalayas

7 Incredible Nepal Adventures You Must Take

Top 10 Things To Do In India

India is a land of cultural diversity and natural beauty. Take treks in the Himilayas. Find a UNESCO site at Hampi. Try houseboating in beautiful Alleppey.

The photo in the header above was taken in Kathmandu, Nepal, by Rajesh Maharjan from Pixabay

Dil Gurung is a Nepalese travel blogger who loves traveling and sharing his unique experiences in the world through his blogs. 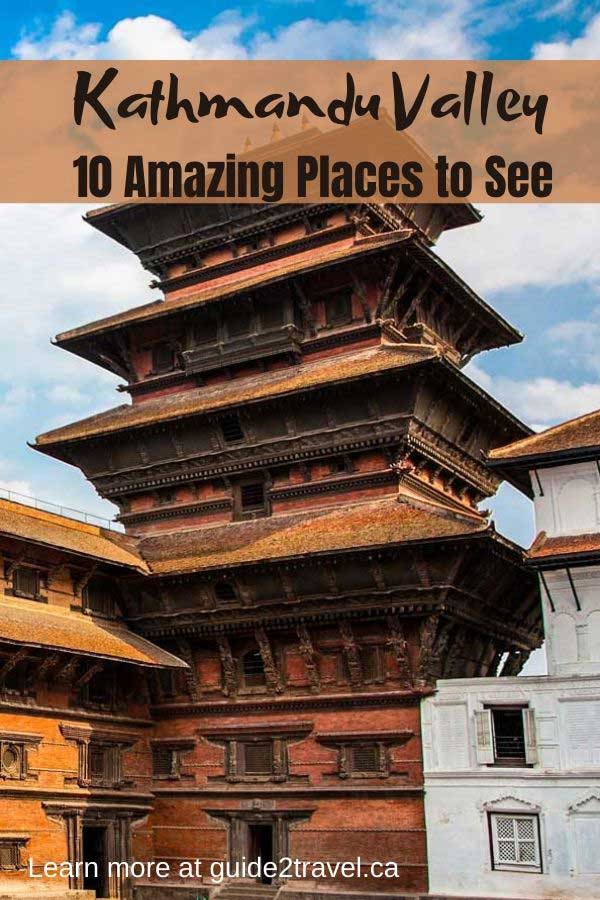