...travel adventures with a twist of history Latest ArticlesAdventures
The state of Montana is knowns as Big Sky Country. Here, you’ll find lots of opportunities to step back in time and recapture a sense of the way it was in the old west. However, when it comes to authenticity, you can bet the Range Riders Museum, in Miles City, Montana, is unequaled. Established in 1939 by actual range riders, this museum preserves the artifacts and tells the stories.

Below, you’ll find some of our favorite displays. 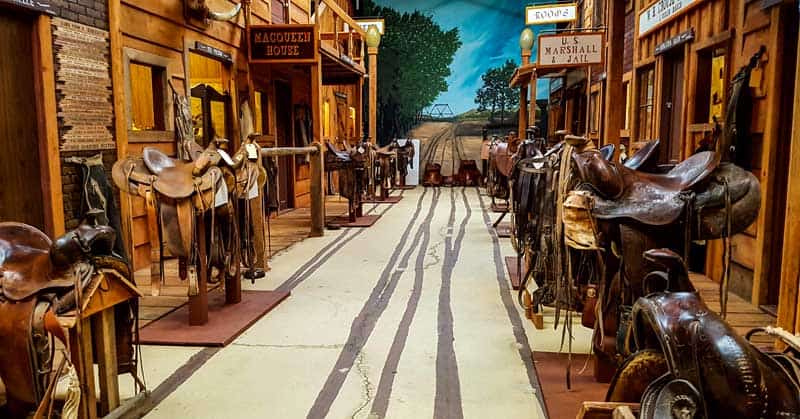 When we travel in the US, we inevitably start out in North Dakota or Montana where we cross from Canada into the United States. So, we’ve explored a number of attractions. However, we weren’t expecting the size or calibre of the Range Riders Museum.

Indeed, it’s a sprawling open air museum that includes the original 2800 square foot log building dedicated in 1942. It also has numerous add-ons and other exhibit buildings moved here from other sites that spread out like an old west town.

We started our tour on Main Street, Old Miles Town, after leaving the reception area. The log building fronts all sport signs identifying their purpose. You can wander through the U.S. Marshall & Jail to Rooms (both provide rooms, although the experience between the two was significantly different in the old days!). Instead of horses tied to the hitching rails though, the poles hold saddles of every make and description.

And what else symbolizes the old west better than a saddle?

Saddles have been around for millennia. However, the saddles of the range riders, which are what we still use today, took centuries to evolve. The initial design started with saddles built for war. They were brought by the Moors to the Spanish, who improved on them by adding more protection for horse and rider. Eventually these became the stock saddles on display in the museum.

What makes stock saddles different? The high pommels and saddle horns used when roping cattle or horses. Mind you, I remember finding the horn most useful for hanging on when competing in barrel racing events! 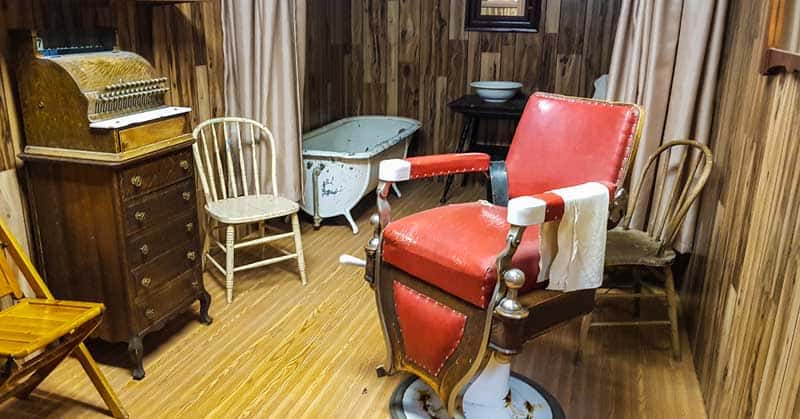 Of course, each building on Main Street is set up according to its sign. We wandered through the Conservancy for Music, the Post Office, the Grey Mule Saloon, Bob’s Barber Shop, Macqueen House, the Drug Store, and more. 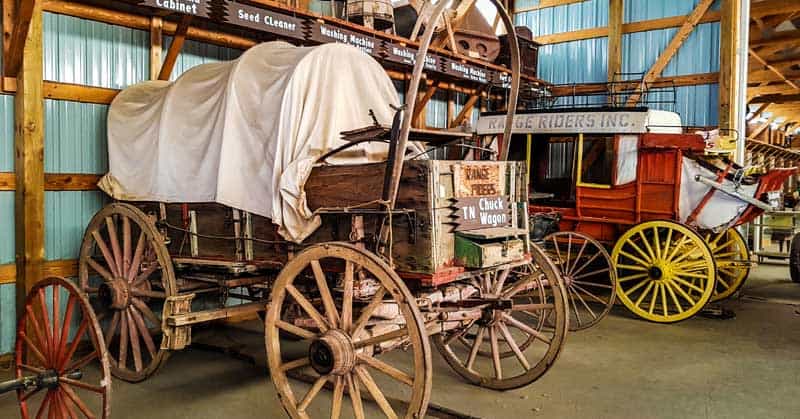 Stagecoach and chuckwagon at the Range Riders Museum in Miles City, Montana.

The museum recognizes the earliest inhabitants of the area with an interactive display, the Lame Deer Camp. It tells the story of the conflict that played out during settlement and how the natural terrain was important.

The first visitors to this area used Mackinaw flat-bottomed boats on the Yellowstone river and its tributary, the Tongue River, which empties into the Yellowstone at Miles City. The Yellowstone rises just outside of Yellowstone National Park in Wyoming. It runs for nearly 700 miles across Montana until it joins the mighty Missouri River in North Dakota.

While the Yellowstone is the longest free-flowing river in the lower 48 states, the Missouri was much more important for moving people and cargo.

Miles City was founded in 1877 near Fort Keogh. The museum celebrates this history with a scale model of the Fort in an interactive room where you can explore its history. You can also walk through one of the original Officers’ Quarters buildings, which was moved to the museum grounds.

A lot of Montana, though, wasn’t accessible via river, so stagecoach travel was important. While there were earlier stages, the state’s first regular stagecoach lines ran from Salt Lake City, Utah, to Virginia City and Billings, Montana, starting in the 1860s. Mules, freight wagons, and bushwackers predominated in good weather, followed by sleds and sleighs when winter hit.

Back in the ‘day, the range was wide open and cattle grazed wherever the cowboys could find water. Around Miles City that water was the Yellowstone River. Texas longhorns had reached Montana by 1866 (Tusler, 2013), and small ranches popped up. Eventually these gave way to the short-lived 1880s era of cattle barons.

That meant cowboys, often transient, hired on to herd the cattle all summer then to get them to market in the fall. The number one skill required to get hired? Riding a horse, of course. And number two? Roping. While a good horse was important, a cowboy who couldn’t rope wouldn’t last long on the range.

The cattle industry really got rolling in Miles City with the arrival of trains. Indeed, the Northern Pacific Railroad came to town in 1881-82, making the city a key transportation crossroad. Main Street in Miles City, which is listed as a National Register historic district, was the town’s primary commercial artery until the late 20th century. 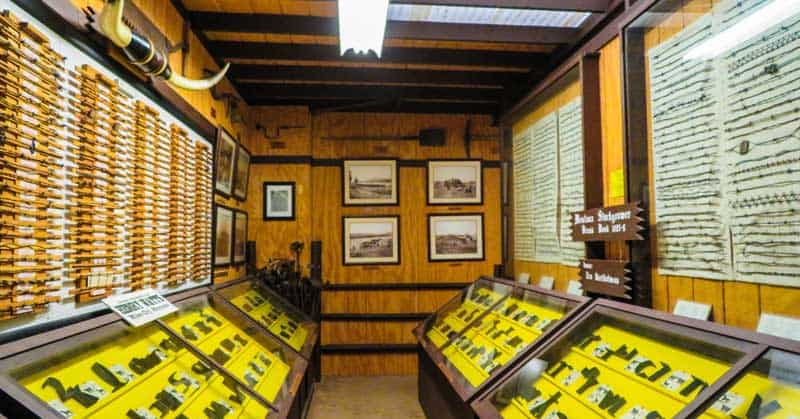 Branding irons and barbed wire types on display at the Range Riders Museum.

Brands were the “signature” of ranchers on the open range, stamped into the hips of animals with red hot branding irons. Barbed wire, on the other hand, marked the end of the open range of ranching. Fenceposts strung with wire made way for a different lifestyle where ranchers could contain their stock in one place.

In the museum, you can explore the history of the LO Ranch. Its displays give you an idea of how one of the biggest cattle ranches looked in the day. You can also listen to the history of life on the LO with recordings done by locals.

For me, after growing up on a ranch, the display of hundreds of different types of barbed wire for fencing was the most amazing. Barbed wire is an American invention, having been patented in 1867. However, as with all things it didn’t gain importance until a manufacturer stepped in. That happened in 1874, when Joseph Glidden of De Kalb, Ill., came up with a machine to build it.

Once it was readily available, it didn’t take long for barbed wire to turn the wide open grasslands of the west into pastures.

Home on the Range 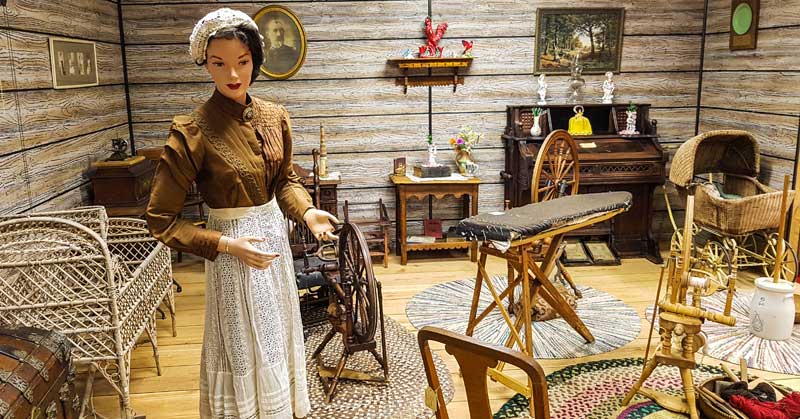 Home on the range museum display.

The ranch houses of the west had little in common with the fancy parlors and fine china of the east. Indeed, the life of ranch wives was often a tough one with few luxuries available before the turn of the 20th century. Furniture was often roughly made and focused on utility, rather than fine wood carvings and finishes. 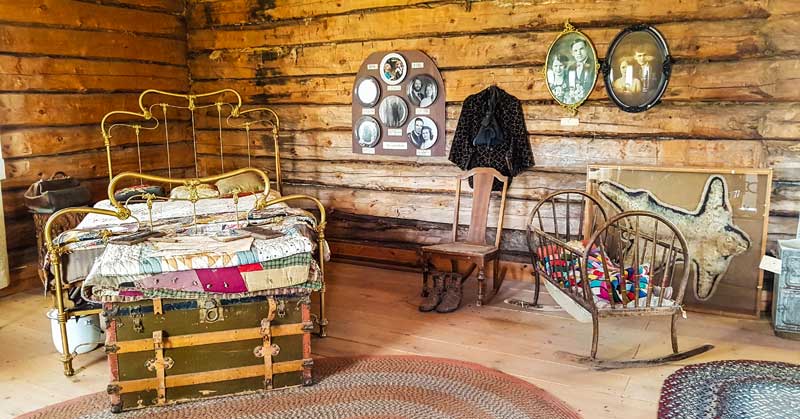 Bedroom in a Miles City original pioneer home relocated to the museum.

The Range Riders Museum has an original pioneer home moved to the location from its original homestead. The house is complete with wood burning stove, a huge tin coffee pot (the staple drink of ranchers everywhere — I think my parents drank gallons every day), a chamber pail under the bed, so its owners didn’t need to make a midnight run to the outhouse, and a wooden cradle for baby.

When it comes to early western life, there are lots of other displays throughout the museum in addition to the pioneer home. One display I really enjoyed was the original wedding outfits of the Jelinek Wedding display, complete with the retirement photos of the couple. Sylvia’s China and Carol’s Hattery were two more. 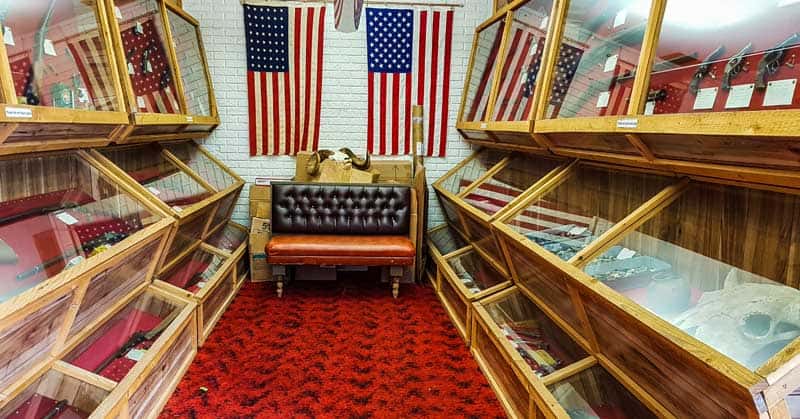 As a kid, David says he never left the house without a 22 in his hand for hunting gophers — a menace for cattle ranchers. Many a cow or calf broke legs stepping into gopher holes, so keeping the population low had always been a necessity for ranchers. So, to say Bert Clark’s gun collection was one of his favorite displays is an understatement.

Indeed the collection of guns is one of the museum’s premier displays. Bert Clark, or BJ, was the youngest of seven children born to a Wisconsin family. He was an accomplished boxer, even teaching it for a decade. In 1940, he, along with his wife, Alta, moved to Miles City, until they eventually retired in the 1960s. B.J. died August 19, 1964, with complications after surgery.

Clark spent forty-five years building his collection, which consists of many unique guns. They included: an 1852 .44 cal. double action pistol, an 1858 Remington .44 cal. pistol from the Civil War, and a pistol, which was still loaded and in its holster, found by Walt Quinlan near where Custer camped on the Rosebud.

There were also French Flintlock pistols circa 1770, a bayonet with extra long blade so it could be used as a sword used in the Philippines, and a late 1800s 12 gauge double barrel, open hammer, lever under the trigger shotgun from England.

MacDonald, J.G. (1950). History of navigation on the Yellowstone River. Missoula: University of Montana. Retrieved from https://scholarworks.umt.edu/cgi/viewcontent.cgi?article=3584&context=etd

Schwantes, C.A. (n.d.). The steamboat and stagecoach era in Montana and the Northern West. Published in Montana the Magazine of Western History. Retrieved from https://mhs.mt.gov/Portals/11/education/docs/CirGuides/Schwantes%20Transportation.pdf

More Places to Visit in Montana

East Glacier in the Rain — A Road Trip

Glacier Park was established more than a century ago, back in 1910. Over 350 locations in the park are on the National Historic Landmarks record of historic places. Day 2: Glacier Park & Polson, Montana Our morning drive to East Glacier started out at 9 a.m. as we set...
Read More

Where to Get Snowed In… On Purpose

Take a road trip on the Great Northern Highway to see the colors of the fall leaves in Glacier National Park, part of the UNESCO World Heritage site, Waterton-Glacier International Peace Park.

Get a feel for the old west in the Montana Bar in Miles City, Montana. More than a century old and full of originals furnishings, it offers drinks & dining.

If you’re visiting Glacier National Park, you must make the 70 mile trip to see the Museum of America Museum in Polson & huge collection of Americana.

The photo in the header above was taken at the Range Riders Museum in Miles City, Montana, USA. Photographer: Linda Aksomitis.

Photos in the Article

All of the photos in this article were taken by Linda Aksomitis in Miles City, Montana. They may be reused with an Attribution 4.0 International (CC BY 4.0) license – please link back to https://guide2travel.ca. 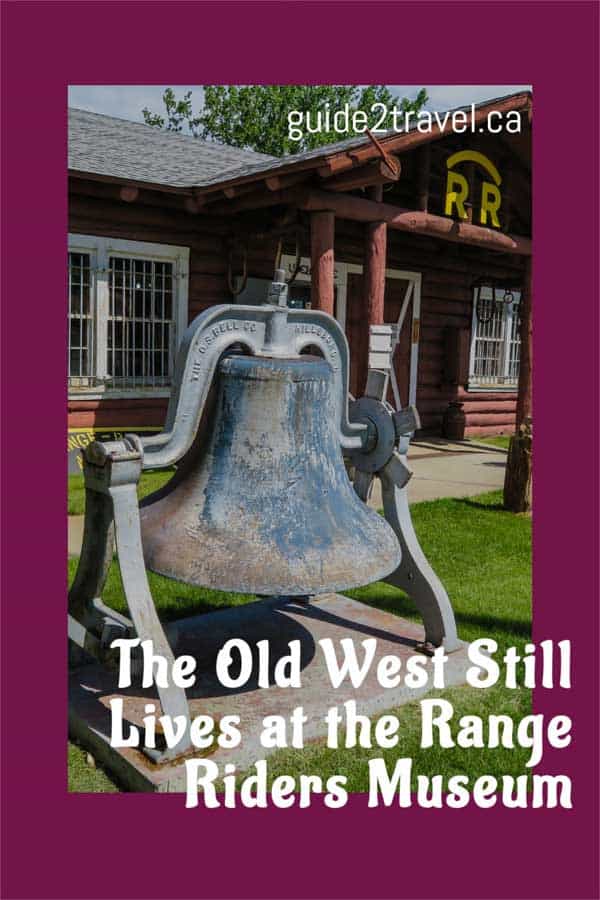 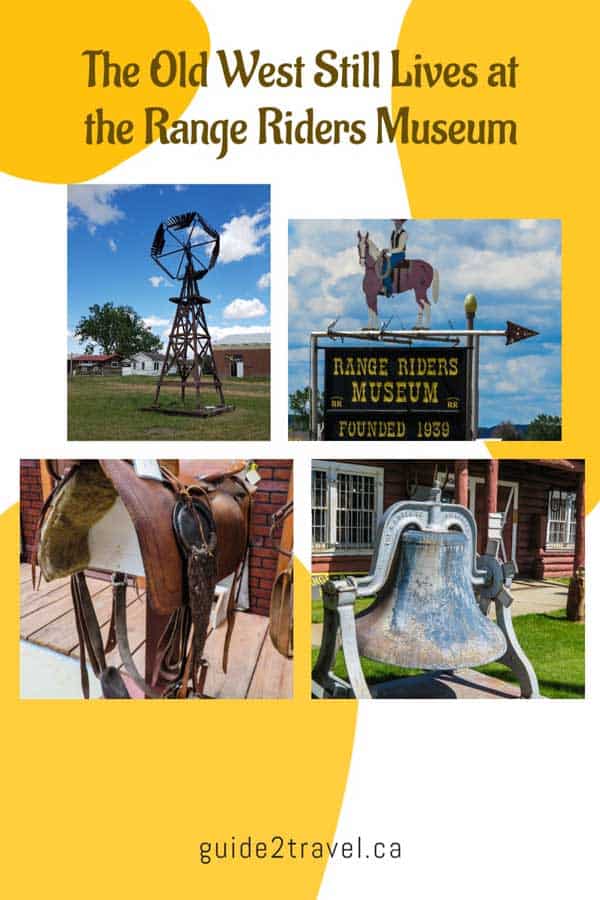 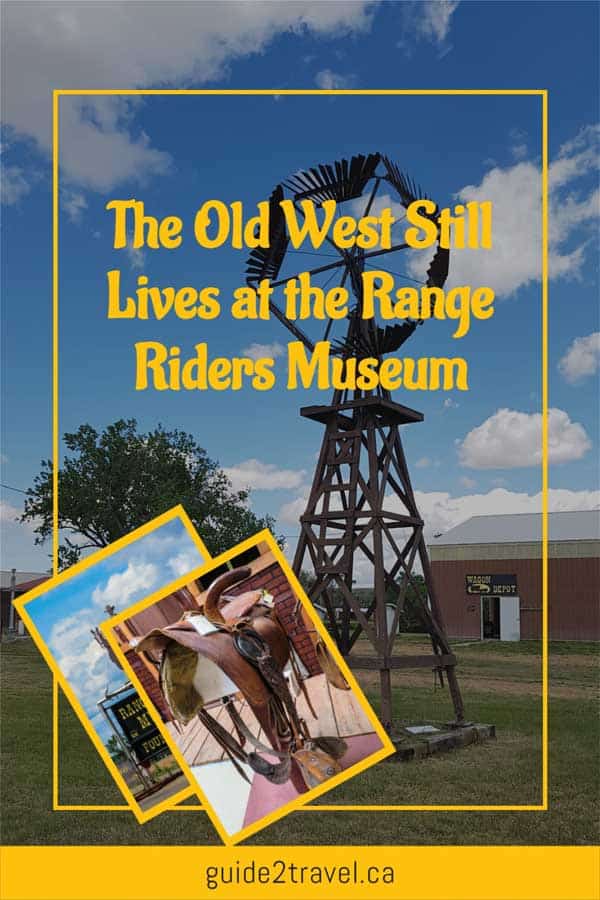 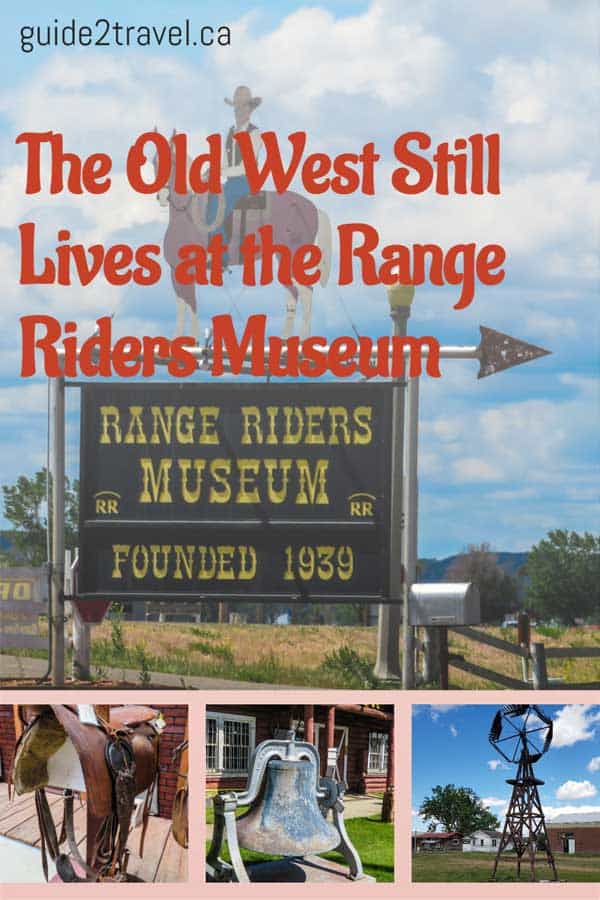