...travel adventures with a twist of history Latest ArticlesAdventures
;
If you’ve ever been to Thailand, and especially to its capital, Bangkok, then there’s a big chance that you have been to — or at least heard of — Khao San Road. Every backpacker must experience this location traditionally before he or she sets out to explore the rest of the country.

Indeed, all taxis and tuk-tuks will blindly lead you to Khao San Road whenever you look a little lost on the side of the street, especially if you’re under 45, carry a guitar, have a few dreadlocks, or happen to be wearing the tourist baggy Thai loose pants (with illustrations of elephants on it). 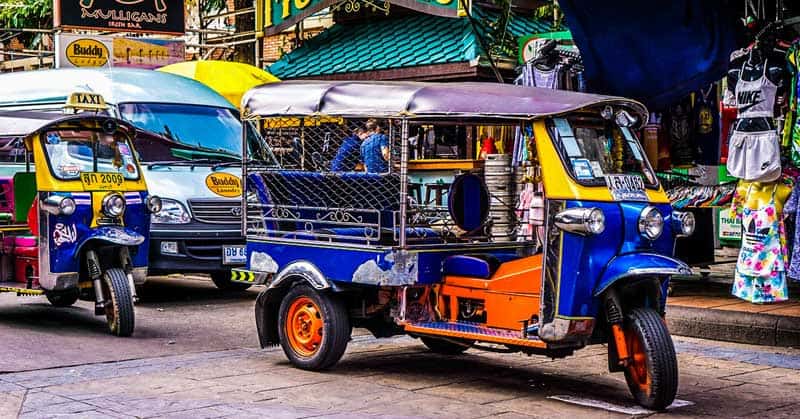 A Tuk tuk on Khao San Road in Bangkok, Thailand. Image by TheDigitalWay from Pixabay.

While backpacking throughout South East Asia, I’ve always enjoyed falling back on Thailand. It was by far my favorite country for numerous reasons.

But back to Khao San Road. If you haven’t been there, or have never heard of it, then allow me to try to create a picture or give you an idea of what Khao San Road is all about.

Khao San Road is a 410 meter long street in the center of Bangkok that’s littered with cheap hostels and affordable 3-star hotels for backpackers. With these various accommodations come dozens of bars, cafés, discos, restaurants, shops, stalls, Ping-Pong shows and travel agencies, which can set you up for a direct bus to various corners in South East Asia in a couple of minutes.

The street is filled with hustlers and buskers who will sell you anything you can and can’t imagine. You’ll see people selling fried scorpions, tarantulas and bats on a stick, as if they were hotdogs or cotton candy. You’ll find yourself ushered into a shop selling fake ID cards, Harvard degrees, drivers licenses, birth certificates, etc. There are professional tailors who measure you up just by looking at you, and can set you up with a suit that can make James Bond jealous.

And then there’s the food. Besides the fried creepy crawlers on a stick, you can enjoy all the delicacies Thailand has to offer in one street. Everywhere you look is food. From small, cardboard food stalls with tiny fluorescent plastic stools, to the big terraced restaurants with menus with more pages than the New Testament. Not really into Thai food? No problem. Just line up in front of Burger King, Mc Donald’s, or your good-old Starbucks.

When the sun sets over Bangkok, you’ll find a vibrant scene in Khao San Road. Every bar, club, and shop starts playing music. Not all the same tune, mind you. No, they all play whatever they like and they play it loud. Beers are everywhere and cocktails are consumed in buckets with a straw. These buckets are very affordable but the hangover doesn’t come cheap.

The entire street parties like it’s the last day on earth and that’s clearly imaginable when sunlight hits the pavement again and reveals young tourists lying face down in their own filth, surrounded by discarded booze containers and strip club flyers.

But who created this Mecca in the center of town, and who is behind this madness?

The Story of Khao San Road

Khoa San means “milled rice” in Thai. Centuries ago, thousands of tons of jute sacks were delivered to wholesalers in the area as boats paddled and eventually motored down the enormous Chao Phraya River and into the mouth of Banglamphu Canal. It was the world’s largest rice-growing nation and by far the greatest rice market by the end of the 19th century in Siam.

Smaller merchants set up business south of the canal, where a dirt road became so overcrowded with rice traders that King Chulalongkorn ordered the construction of a proper road in 1892. Unlike other city streets, the cobblestoned strip was not grand enough to be named after an historic Thai figure or national hero. So, it was simply dubbed Soi Khao San (Milled Rice Lane).

Only a century later, an invasion of international travelers nearly ruined the traditional market culture. The influx began as a trickle in the late 1970s, when Bangkok was a stopover on the Asian hippie path. The trickle grew into a tidal wave in the 1990s that has lasted right up to today. 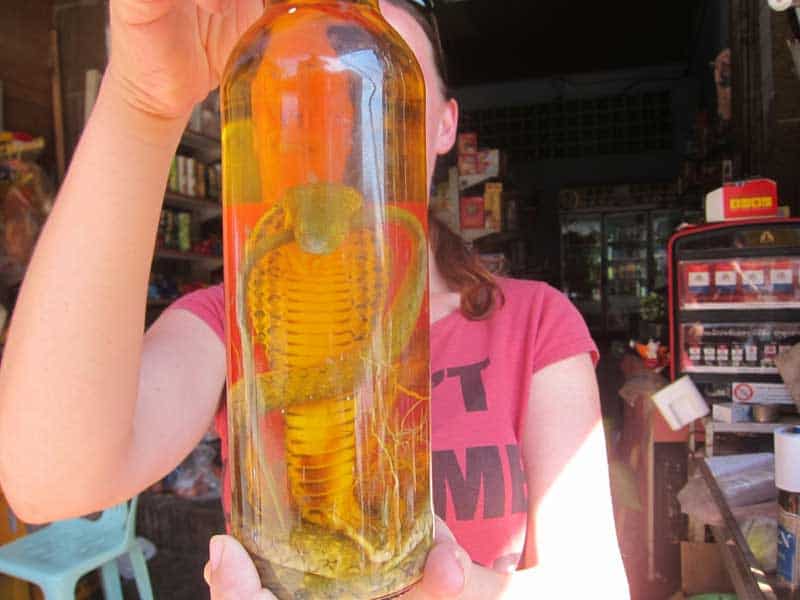 According to the Khao San Business Association, the street draws 40,000-50,000 people per day during peak season and 20,000 tourists per day during low season. The street of Khao San itself houses between 250 and 350 licensed vendors.

Finding information about the number of bars and nightclubs seems impossible. This is mainly due to the many licenses that are being withdrawn and provided. Bars seem to change owner quite often. I wonder why…

Don’t Forget to Have a Look

In this article, I tried to give you an impression of this famous/infamous road. However, I can honestly admit that I haven’t even scratched the surface. Khao San Road is an experience not to be missed and you’ll love it or hate it. Or, like me: both.

Ramon Odijk is a world traveling backpacker, blogger, and now sailor, who enjoys exploring new cultures and places off the beaten track.

More Places to Visit in Thailand and Malaysia

The photo in the header above is of Khao San Road at night, a popular food street and famous district for back packer and budget tourists in Bangkok, Thailand — Photo by Sonatali.

Ramon Odijk is a world traveling backpacker and blogger. 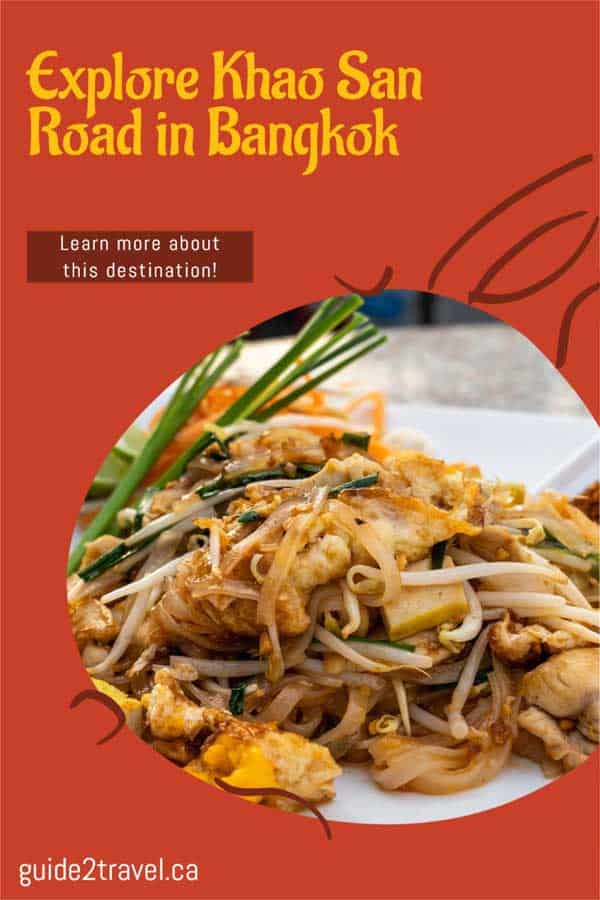 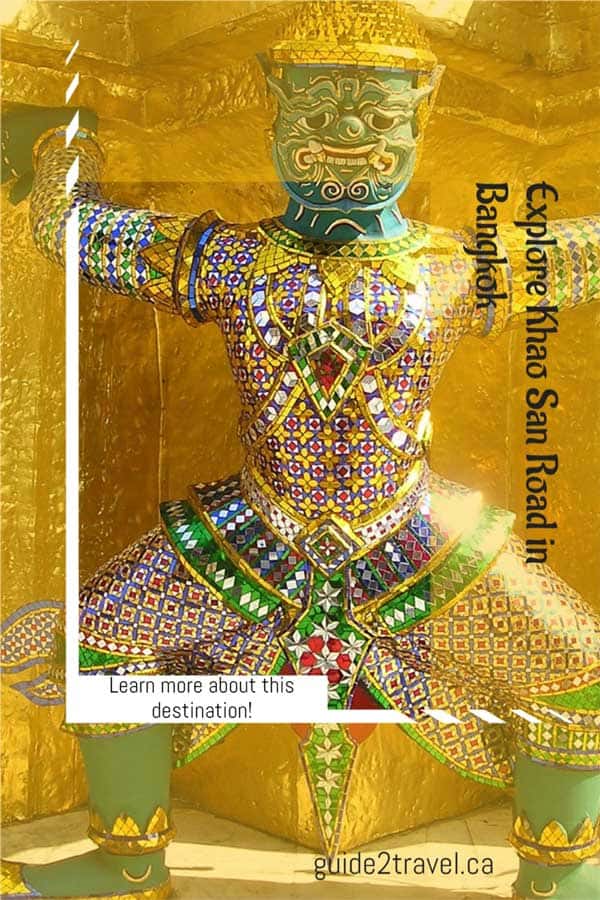 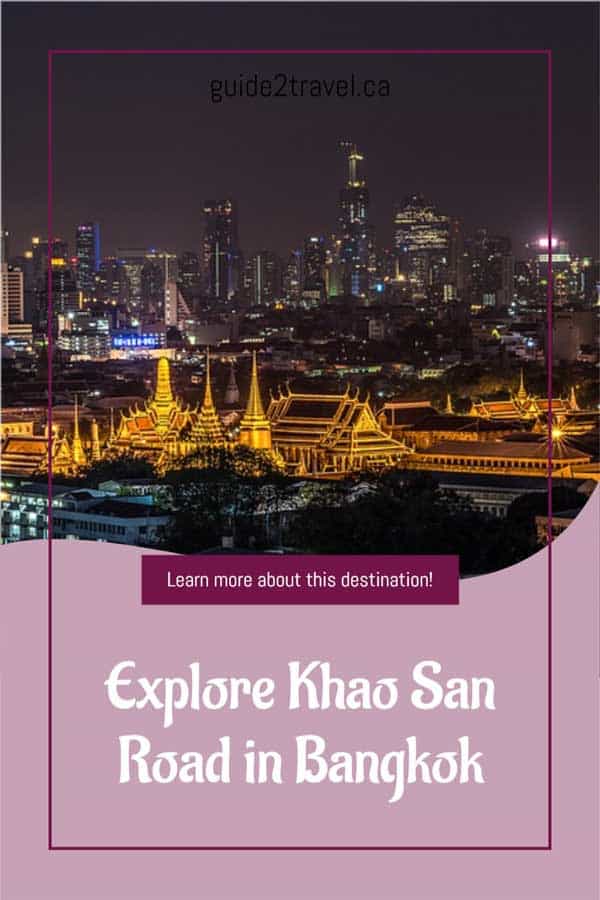