The land of eternal sunshine, where tea is not only drunk but eaten too, the question isn’t: “How are you?” but “Are you happy?” In the mornings, you are awoken softly by the mystic chime of the gong accompanied by humming monks. This country screams spiritualism, you just need to read the signs. Do mind you step though, not to end up in a red puddle of spit out beetle nut juice.

This country is far away from the hustle and bustle from most Western countries. Forget about heavy traffic, screaming neon billboards and commercials about the newest casinos. Let me introduce to you to the kingdom of Myanmar. 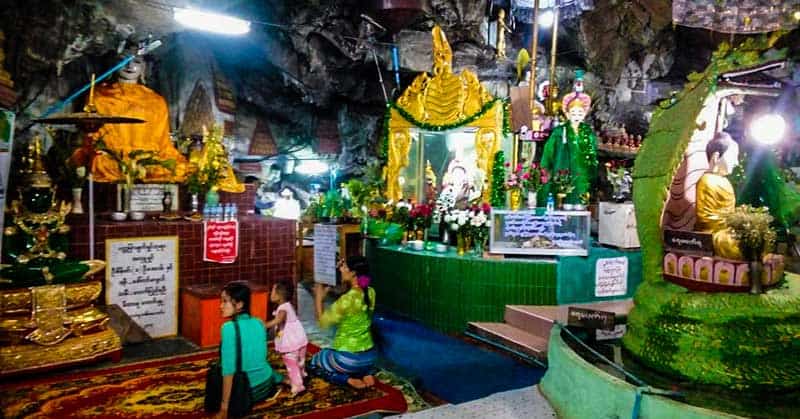 Shrine in Myanmar. Photo by Lotte.

The first settlers in Myanmar descended from India and China. People from these two big nations travelled by means of land and had to cross the area to trade.

The most notorious name in antiquity, Anawrahta Minsaw, the king of Bagan, he developed the first prosperous kingdom. Bagan, soon became a glorious influential and spiritual hub. By adopting the Theravada Buddhism in this area, this respected, energetic man assembled all surrounding cities and tribes to become part of the kingdom of Bagan. He took the throne around 1044 and the first milestone in history had been made.

His successors lacked his vision and weren’t as dedicated to create a powerful nation. Instead, they were more occupied with gaining power in devious ways. Translating in a long period of fighting over the throne and thriving kingdoms changing locations.

In a later stadium the Konbaung dynasty wanted to expand their territory, but came to close to the British-held Chittagong in India. Causing the English to colonize Myanmar starting in Yangon. This warfare was the first and most expensive; financially and death toll wise, of British India. After the peace treaty there were two more occasions of Anglo Burmese war. All three took place in between 1824-1886. In 1988 the English name Burma was changed into Myanmar.

From 1962 until 2011, the country was taken over by the military. Infamous independence fighter Aung San Suu Kyi fought for the fall of the dictatorship and democracy.

As her father did before her. He was murdered in a reaction. Aung San Suu Kyi went to England and studied. She only returned to Myanmar in 1988 to take care of her sick mother. Molested by the political situation she started the NLP (National League for Democracy) party. She had many followers and became such an icon that she won the elections by 82%. The army answered by placing her under house arrest from 1989 till 1995 and from 2003 till 2010.

And from the 1st of February of this year, 2021, once again, this stunning place on earth is unfortunately occupied by the army.

Shortly after the first nearly 50 years lasting dictature, Myanmar opened its borders to tourists. And so it happened that the first tourists entered the country.

The first few years proofed to be tough to attract visitors due to the still instable “free government”. Was it really free? Or was this just a spectacle drawn up to attract more income from tourism?

The hubby and I visited Myanmar, a cultural intact destination not yet spoiled by tourists in 2015. We were blown away. The local people were incredibly generous, eager to communicate and invite foreigners in their homes and listen to their stories. We felt instantly at home and safe. In comparison with Latin America crime was almost nonexistent here. Handy for me, because during my backpacking period I lost quite a few things… Ok I’ll elaborate.

On one occasion the hubby and I were on one of many vomit inducing hours long bus ride in front of us. Sleep deprived and hungry I got out on one of the bus stops to get something to fill our stomachs. Once I was snug back on the bus and dozing off, I was awakened by knocking on the window.

It was one of our fellow passengers waving with my wallet in his hands. Oh, god I just lost the wallet in the shop and we carried around quite some cash. (Because the ATMs wouldn’t let us withdraw bigger amounts) This guy witnessed I lost it and brought it back. As we Westerners do, I checked if everything was still in there and it was. It filled my heart with so much joy, that I haven’t felt anywhere else, that it would be imprinted there forever.

The hubby and I had the pleasure to live here for a year. During our three years of backpacking through Asia, we needed a break and of course some income to spice up our bank accounts and continue the future travel. For us the reopening of the borders after 20 years of suppression resulting in being one of the first tourists in two decades was extremely appealing. This meant to witness a country without overpriced souvenirs, Western bars and restaurants, and girls wearing shorts that reveal too much of there bums in sacred places.

It meant that we would witness an empire unspoiled by foreigners. People that still live according to their beliefs and probably most of them haven’t seen a “white face” for ages. We weren’t disappointed, on the contrary we were pleasantly surprised.

Even after a year of living in Myanmar we couldn’t get enough of it. We adapted easily and were soon wearing longyis (skirts for men or woman). I was a big fan of the ocher colored paste called Tanaka, used as a sunblock. I was a frequent visitor of the daily markets in the area we lived. 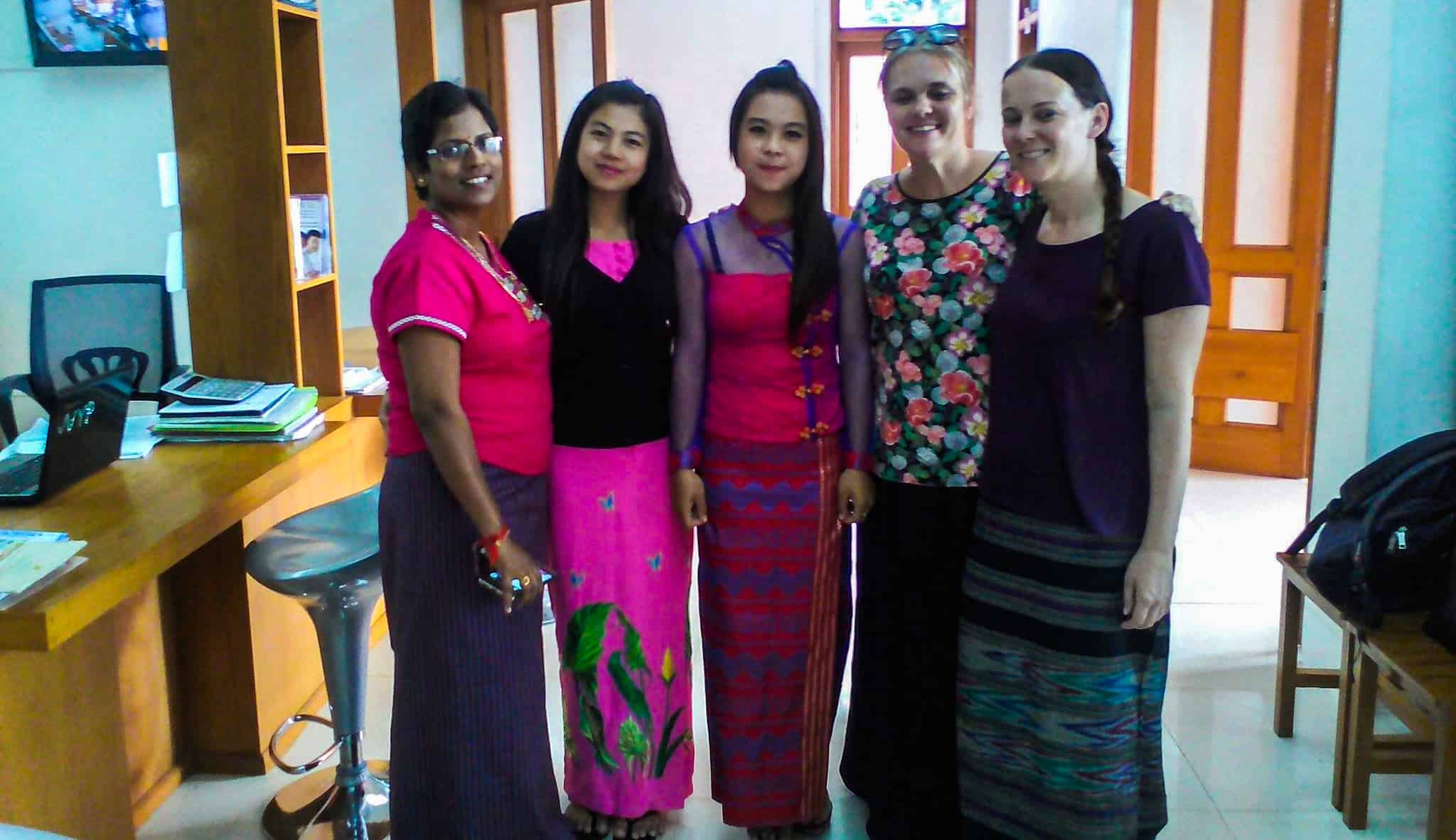 Lotte and her colleagues wearing Longyis. Photo by Lotte.

During my one-year teaching job we resided in Taunggyi. A big city encapsulated with highland tribes, Shan, Chin and Karen mainly. Every day they would down to the village to sell their products. I loved these markets and they certainly loved it when I came around. Initially communicating was a bit tricky but after a few weeks I only had to show up and all my favorite products were brought to me. They were dirt cheap and still the locals were given it away for free. Amazing how generous and disarming these two decades long suppressed inhabitants are. This brings me to another anecdote.

While reading George Orwell’s Burmese days, we decided to go to Kyauktada by train. Because it was in the high North, close to the Rohingya state, we shared a train compartment with hundreds of young soldiers who brought an insane number of explosives and guns. Knowing that the train almost derailed every three minutes due to bad maintenance, it was a tense ride.

Lotte is a globetrotter who really likes to dive head deep into cultures and adventures. She manages to survive as an English teacher and travel blogger.

Top 10 Things To Do In India

India is a land of cultural diversity and natural beauty. Take treks in the Himilayas. Find a UNESCO site at Hampi. Try houseboating in beautiful Alleppey.

There are seven natural UNESCO sites in India. Learn about all of these world heritage sites and their natural wildlife and beauty in this roundup article.

The photo in the header above is of the Thingyan festival, Ingle Lake, Myanmar. Photo provided by the article author, travel blogger, Lotte. 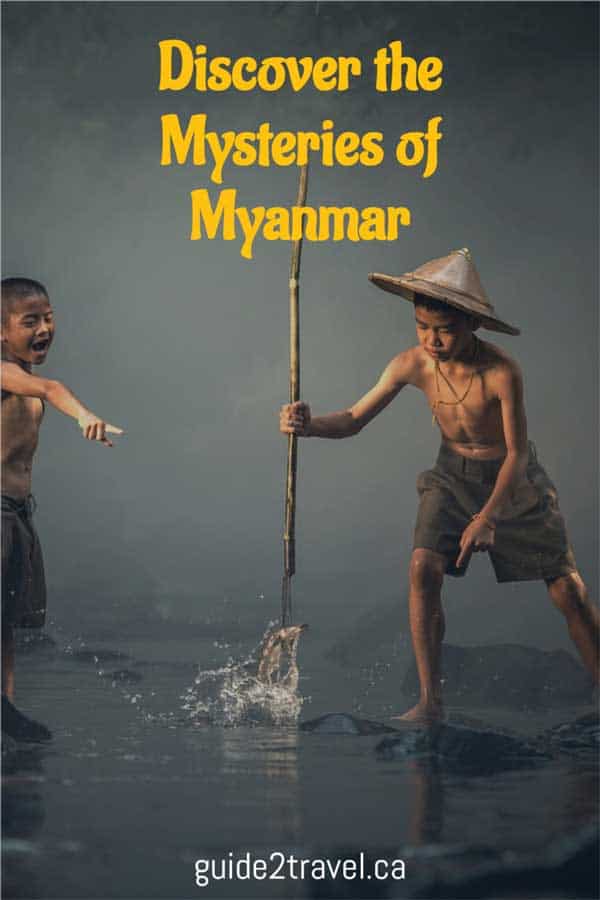 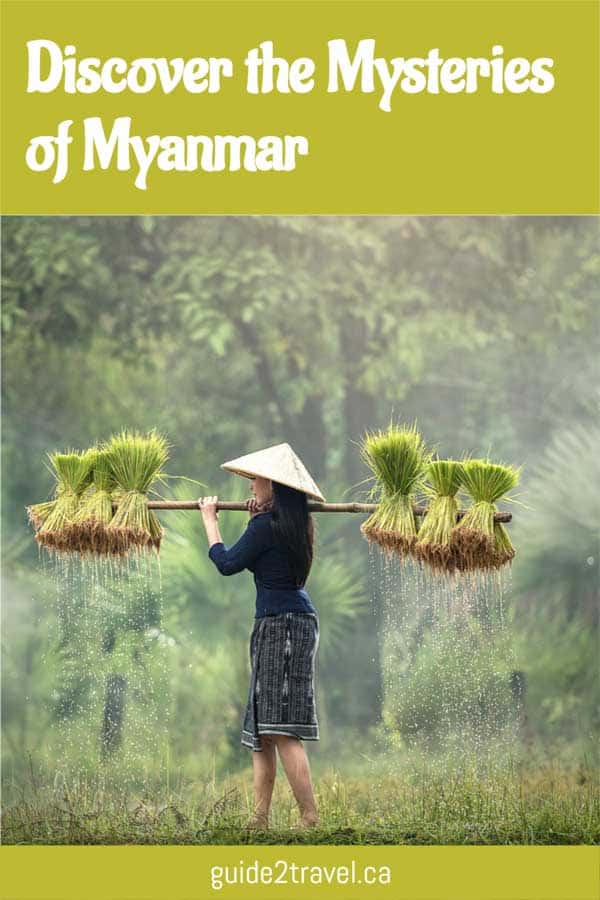 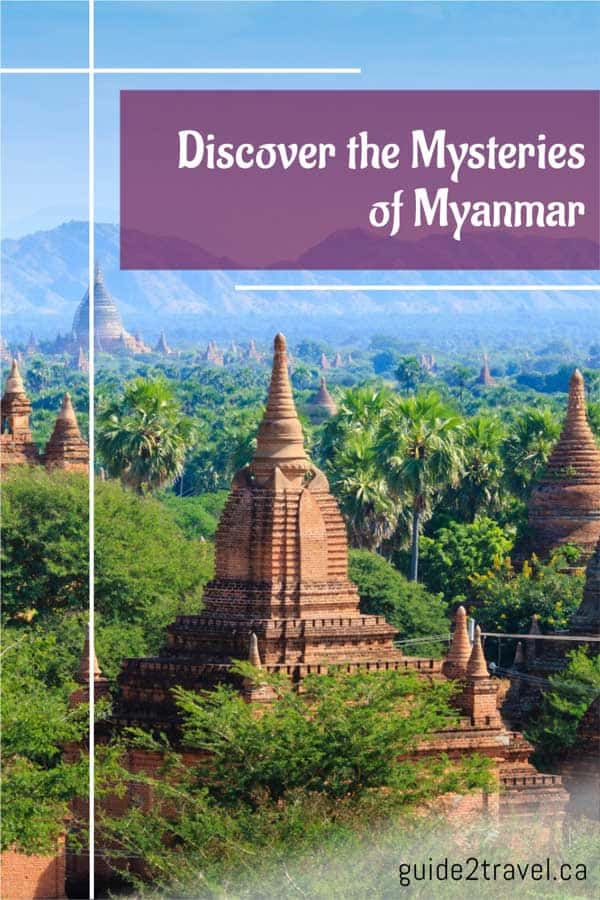