In Cambodia, more specifically in Battambang, bamboo trains literally fly over the tracks. If you enjoy extreme adventures, this is one you won’t want to miss! While it’s a tourist attraction these days, the bamboo train was originally a supply system that operated on Cambodia’s Northern rail line decades ago due to the country’s civil war.

For me, riding the bamboo train has been one of the most exhilarating, adrenaline producing activities I’ve ever undertaken. 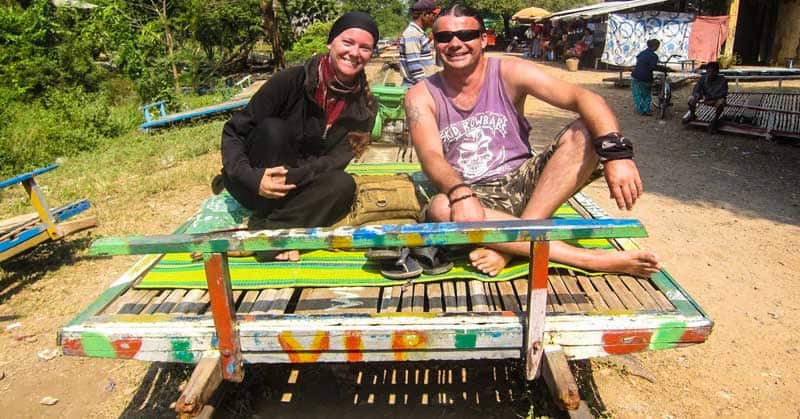 Lotte (the author) and Ramon riding the Bamboo Railway in Cambodia. Photo provided by the author.

The ride was exhilarating knowing that there aren’t any safety measure applied on these self-made wagons. It’s all about having the original, slightly dangerous experience nowadays. A few decades ago, people weren’t worried about the dangers of these bamboo trains. Their sole focus was survival, rushing to escape the communist regime they found themselves living in.

Yup, as you’ve probably already guessed by now if you’re familiar with Cambodia, civilians tried to flee from the murderous hands of the communist, Pol Pot. His merciless agrarian socialism reign dictated all inhabitants from the cities to relocate to rural areas. There they were forced to work in collective farms.

People had to work hard and long hours, were malnourished, many on the brink of starvation, and those who didn’t want to listen were tortured. It’s crazy to think this was only a few decades ago. Though the atrocities only lasted from 1975 till 1979 the atrocities, the death toll ran up to no less than a shocking two million.

When in Cambodia backpackers and other tourists will recommend you to go for the Battambang train ride, or Norry (nori) as it’s also called. The only connection it has with a train are the tracks. The wagon, as I prefer to call it, exists of only a few components. As mentioned before, there’s a bamboo platform that sits on a steel frame, driven by four wheels and an axle, and powered by a small engine.

The brake, if existent, consists of a stick wrapped around the axle by a rubber band. The mechanism is simple — the stick can be either pushed away or closer to the axle. This results in increasing or reducing speed. These parts aren’t welded together or anything, just placed on top of one another.

If you know these trains go up to 40 to 50 km an hour, with the weight of the passengers being the only gravity that keeps the different pieces tied together, you can imagine it can be a scary experience.

Depending on what the owner of these carriages was able to scavenge of the military vehicles and supplies left after the regime and his creativity, these moving bamboo platforms differ to some degree. The base however is mainly similar in them all.

A Wild Ride on the Bamboo Train!

My partner and I travelled up to Battambang, and of course, had to try this insane train ride. At first, I was quite scared until I saw whole families having so much fun. We didn’t have to wait long to be placed on top of these carriages.

The trip started slow but soon accelerated and I had to grab hold of my hat not to let it fly away.

The tracks were in a pretty dire state, so once every few minutes we derailed for a split second, luckily ending back on the rails. My heart started throbbing in my throat, going faster that I imagined it could when there was another train on the same track approaching us from the opposite site. I braced myself for a possible collision and tried to silence my thoughts.

With only five inches separated from each other the trains came to a halt, much to my liking! 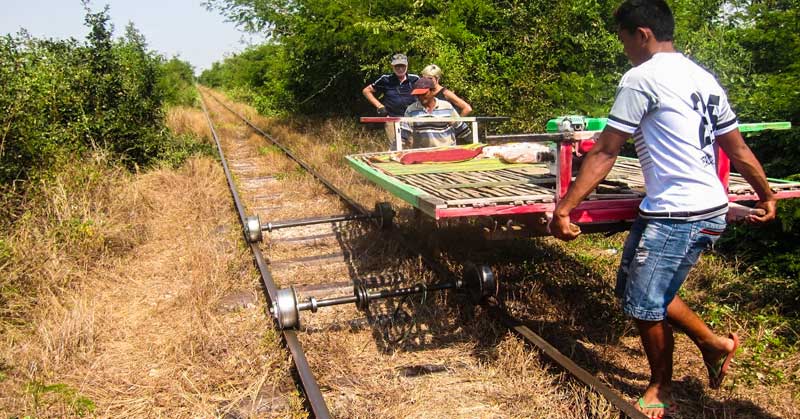 Making way for oncoming traffic on the bamboo train in Cambodia. Photo provided by the author.

We were wondering who had right of way? How do you decide this on a two-way single track? Our chauffeur signaled that we had to get up. He dissembled the three-piece work of art in a matter of seconds, and our oncoming traffic gave way. After a lightning-fast reconfiguration, we were on track again.

Making Way for Oncoming Traffic on the Norry

The final stop was at a little shop that sold t-shirts imprinted with an illustration of the trains. The innovation to gain a bit of income was heartwarming. And of course, we bought one. After a little chat, we continued our way back for the last leg on the bamboo train. However, I was still quite affected from the first. 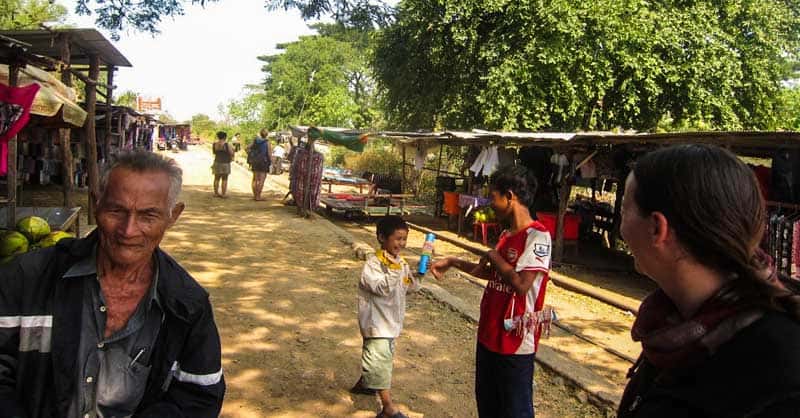 Village with souvenirs for the bamboo train. Photo by the author.

This proved to be an over reaction as we drove through flames on our way back! Apparently, it was time to burn the ground in order to make it fertile season. The burning happened to be a patch on the track. Our driver increased speed. He seemed to take my terrified screaming as an invitation to accelerate even more.

We flew through the flames!

Once back on our feet, I realized I had overcome my fears and felt indestructible. Little did I know that this feeling would become a routine in the distant future.

Lotte is a globetrotter who really likes to dive head deep into cultures and adventures. She manages to survive as an English teacher and travel blogger.

More Places to Visit in Cambodia and Thailand

Tonle Sap Lake is Southeast Asia’s largest freshwater lake. Learn more about its floating villages and villages built on stilts in the water.

The photo in the header above is of the Bamboo Railway in Cambodia. Photo by Cristinna Stoian.

Lotte is a globetrotter who really likes to dive head deep into cultures and adventures. 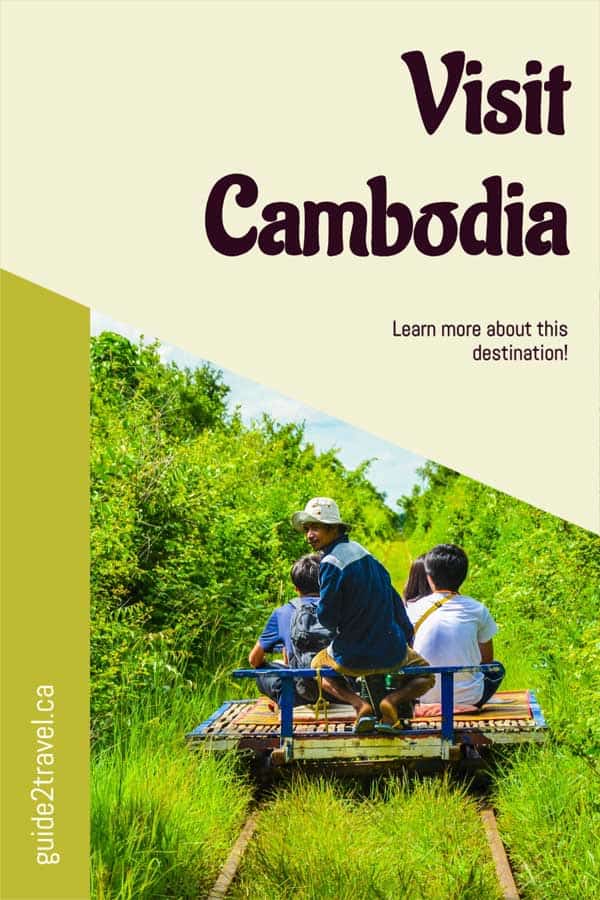 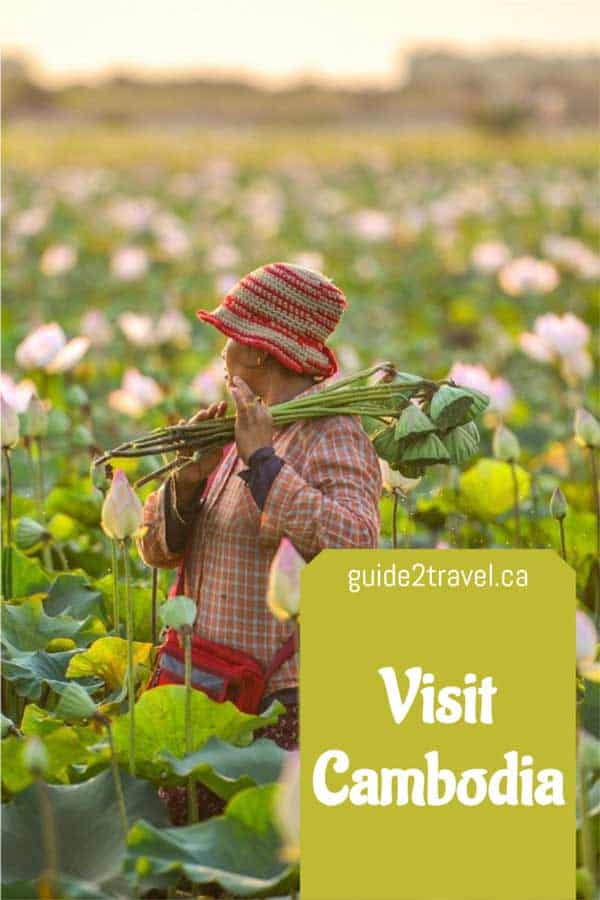 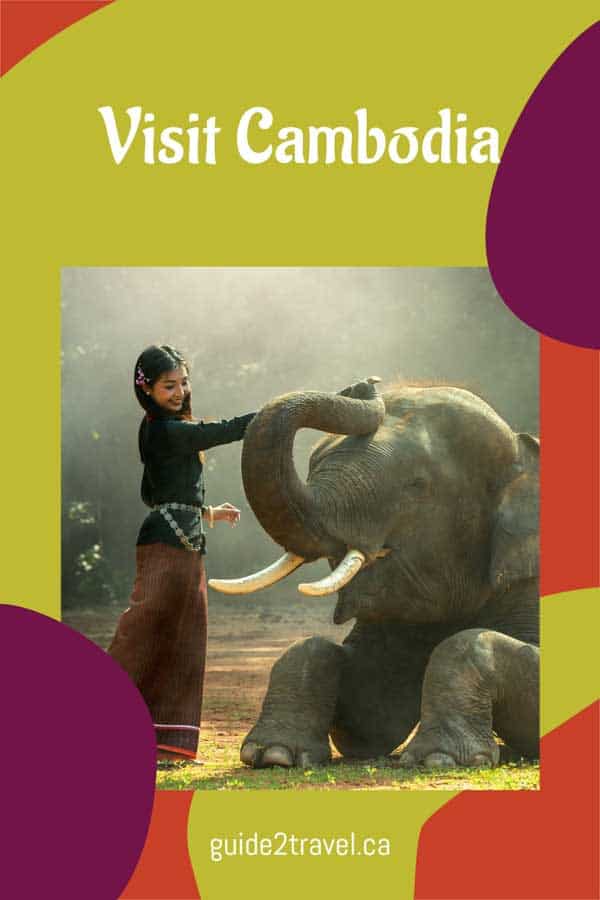