Warsaw is the modern capital of Poland. It’s fast becoming one of Europe’s top tourist destinations, and for a good reason. Warsaw has an endless list of things to do for all types of travellers. 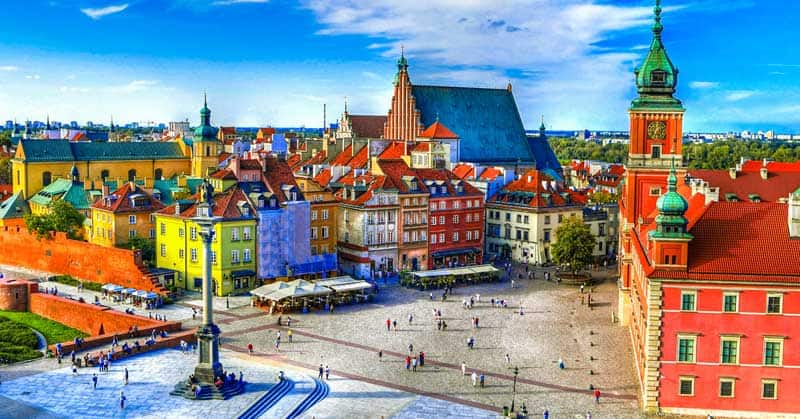 A weekend in Warsaw will give you just enough time to pack in some of the best activities. We have put together this handy list of the best things to do in Warsaw.

A must-see for anyone visiting Warsaw, this stunning castle has been the Polish monarch’s seat since 1815. The epic structure that you currently stands is not the original as it was demolished and rebuilt twice, first by the Swedes in the 17th century and more recently by the Germans during WW2.

Situated in Castle Square at the entrance to the Old Town, it is now a museum that houses the old House of Parliament. Among other exhibitions, it has a collection of paintings, including a Rembrandt and regularly has classical performances in the accompanying concert halls.

After exploring the castle, you can relax in the newly removed two hectares of garden overlooking the beautiful Vistula River.

You will be pleasantly surprised if you thought this one was just for kids. The Copernicus science museum is suited for science geeks of all ages. It has over 400 interactive exhibitions on offer, from hands-on experiments to earthquake simulators, all across six different zones, each tackling a separate area of science. The museum opened in 2010, and it was voted Poland’s top science museum. It also has a state of the art planetarium. This is one activity that will keep you thinking well after you have left Warsaw.

Lazienki Park is said to be one of the most beautiful parks in Poland. It sprawled over 76 hectares of pristine parklands. It comprises numerous parks, including the royal garden, 19th-century romantic garden, 20th-century modern garden, newly renovated Chinese garden, a palace complex and is also part of the traditional Royal Route linking the Royal Castle with Wilanów Palace.

This park is the perfect place to spend strolling around on a sunny afternoon. Stop as one of the many lakes, monuments, water features, promenades, pavilions or cafes, and it also features an amphitheatre and planetarium. You can also find a monument dedicated to the famous composer Frédéric Chopin for any music buffs, designed in 1907 in the Art Nouveau style.

4. Palace On The Isle – Lazienki Królewskie

This Palace is a small palace situated on an artificial island surrounded by a moat overlooking a beautiful lake that offers short boat rides. You will find lavishly decorated rooms and a gallery that houses 140 of the king’s original collections.

Dating back to the 17th century, initially designed by a Dutchman, then remodelled to become the summer residence of King Stanislaw August, who was known as a politician and philosopher, it’s no surprise that his holiday house is so picturesque.

The Vistula River cuts through the centre of Warsaw and has boulevards on both sides. These boulevards are some of the best green outdoor spaces to be during the summer months. It is also one of the only places in Warsaw you can legally drink in public, so it’s become a hotspot for those wanting to make the most of the summer evenings.

The beautiful green areas & natural beaches take you away from the bustling city atmosphere and make you feel like you are on vacation. There are tracks for cycling and jogging alongside the river to take in the splendid views. There is also a variety of beach bars & cafes for when you are ready to wind down. If you’re looking to stay out all night, you can also join one of the wild party boats that cruise along the river.

6. Palace of Culture and Science

One of the most iconic buildings in Warsaw, with a total height of 237 metres, is the Palace of Culture and Science, and it holds the title of the second tallest building in Poland. This remarkable building was by Russian workers and opened in 1955 on the initiative of Joseph Stalin as a “gift of the Soviet people for the Poles.”

Among its 42 floors are four theatres, a cinema, two museums, a 3,000-seater Congress Hall, government offices, academic institutions and private companies. On the 30th floor, you can enjoy panoramic views of the city at the observation terrace, and it is one of the best views in Warsaw.

The museum of the Warsaw uprising is in the converted tramway power station in the Wola district of Warsaw. As the name suggests, the museum is dedicated to the uprising that took place at the end of the second world war in 1944.

The uprising museum is a truly immersive experience that takes you on a trip back in time. On entry, you can use pre-war telephone receivers to listen to the memories of members of the uprising. There is a cinema showing footage collected by the insurgents during the uprising, over 1500 photographs, films and sound recordings telling the history of the days preceding the uprising. You can even walk through replicas of the sewers that the fighters used during the uprising or marvel at the replica of a Liberator B-24J bomber suspended overhead.

Warsaw’s Old Town is as beautiful as it is breathtaking, but unlike other old towns in Europe, this one has been completely rebuilt. Rebuilding was due to it being destroyed during the final days of the second world war.

The Old Towns reconstruction was carried out from the end of WW2 and completed in 1962. As you walk down the cobblestone alleys and gaze upon the medieval buildings, it’s hard to believe that it’s only 70 years old. The rebirth was done so well that Old Town has earned UNESCO World Heritage Status.

9. Take A Break In One Of The Food Halls

Elektrownia Powisle – A unique industrial space next to the Vistula Boulevards, once a power plant, it has been repurposed into a unique food hall with 17 carefully selected culinary concepts from all over the world serving cuisine, including 12 sit down restaurants 5 street food stalls plus three unique cocktail bars. Inside the same building, you will also find a Beauty Hall – a space dedicated to beauty and wellness.

Broward Warszawskie – Translated directly as the Warsaw Breweries, this food hall is on the site of a brewery that dates back to 1846. During WWII, the brewery was dismantled and swiftly nationalized when the communists took over, then closed down not long after and left to ruin. It has only recently been transformed into one of the top spots to eat and drink in the city centre.

Hala Kosziki – The ‘Koszyki‘ market hall, commonly known as the ‘People’s bazaar’, was built in 1906-1908. It has had many different industrial and private uses over the years, most recently in 2012, it was purchased, and renovation began, it opened in 2016 as one of the first food halls of its kind in Warsaw, the situation on the centre of the business district to houses 19 different returns and street food stalls as well as 2 bars.

A trip to Poland would not be complete without enjoying some Polish Vodka, and the best way to enjoy it is with some locals. A great place to meet locals is a small bar district in the city centre called Pavilion on Nowy Swiat street.

Pawilony is a group of over 20 independent neighbouring pubs, bars, shot bars and cocktail bars, most of which have been operating for more than a dozen years. It’s a bustling area filled with locals and tourists alike.

Daniel Muller is originally from Australia and has worked as a writer and tour guide in London, Krakow, and Warsaw.

After visiting Krakow in 2014, he fell in love with the city and co-founded City Walks Poland, and later, Warsaw Boat Party, to share the magic of Poland with fellow travellers.

More Things to See and Do in Poland

The photo in the header above was taken outside the Warsaw Central Station in Warsaw, Poland, by Linda Aksomitis.

Daniel Muller is a travel blogger living in Poland, and the co-founder/owner of City Walks Poland. 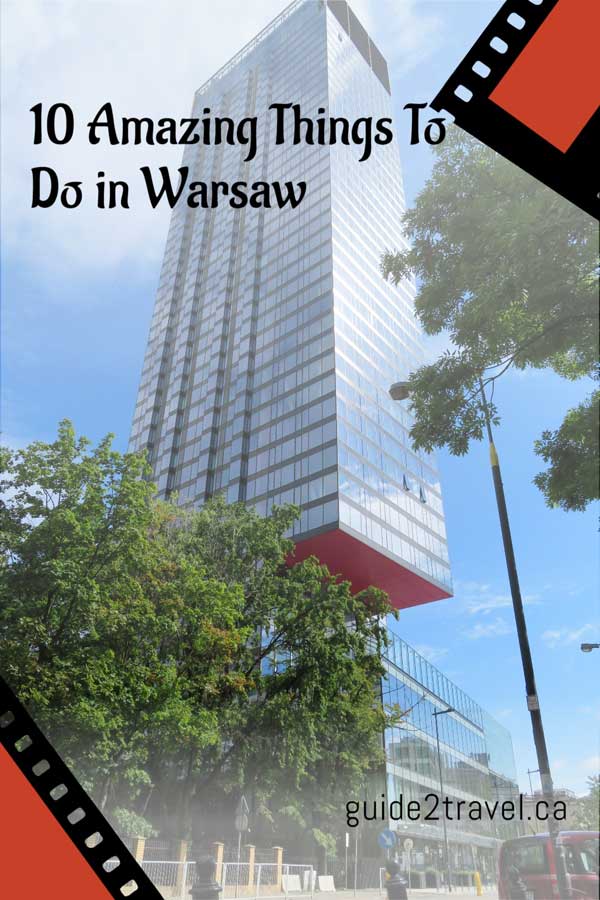 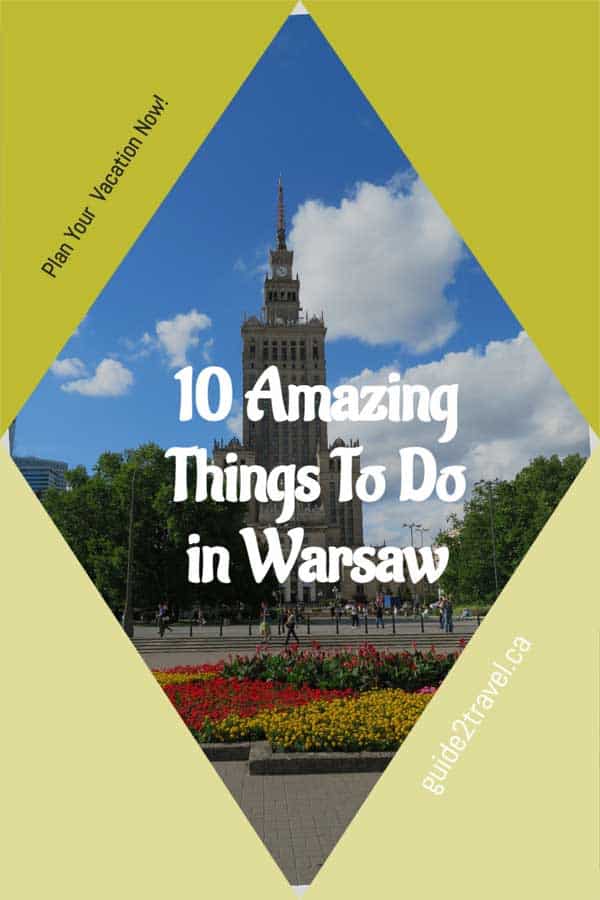 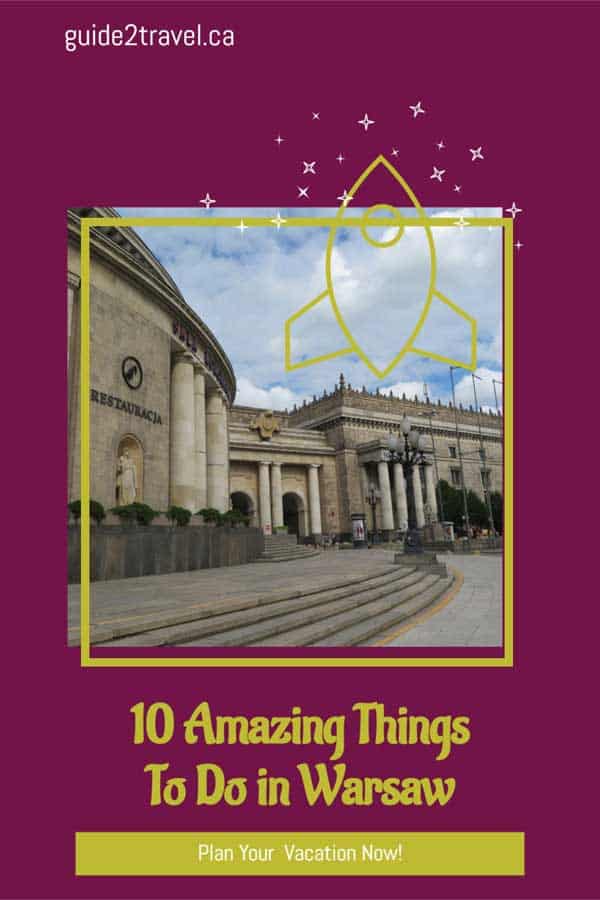 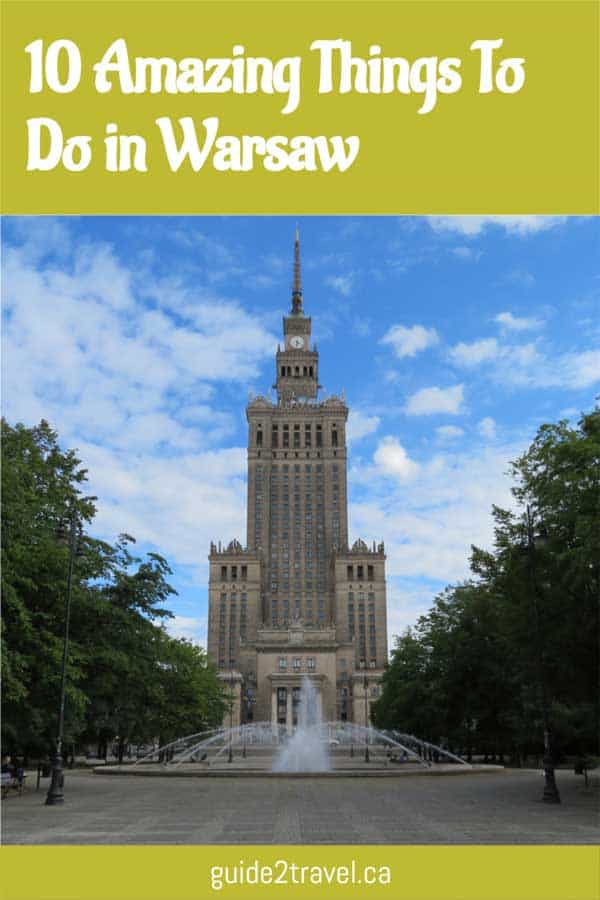