...travel adventures with a twist of history! Latest ArticlesAdventures
;
What does an historic, wild west town like Deadwood, South Dakota, have in common with snocross snowmobile racing? As it turns out, lots! Deadwood’s slogan, No rules — No regrets, is all about embracing the wild side of life. And nothing does that better than a snocross racer flying high above the spectators over a set of triple moguls for 125+ feet or further!

Snocross racers over the moguls on the back straightaway. Photo by Linda Aksomitis.

The ISOC Amsoil Championship Snocross series returned to Deadwood in 2014, when it was named Event of the Year for the association. Since then, it’s been an annual January high-flying, high-speed, high-octane Deadwood snocross event at the Days of ’76 Rodeo Grounds. And racers are always keen to show their skills on each half-minute lap around this short, gnarly racetrack.

Whether you want to spend all your time at the racetrack, or divide it between snocross and the town’s many other attractions, it’s a winter weekend getaway I highly recommend!

How to Attend a Snocross Racing Event in Deadwood 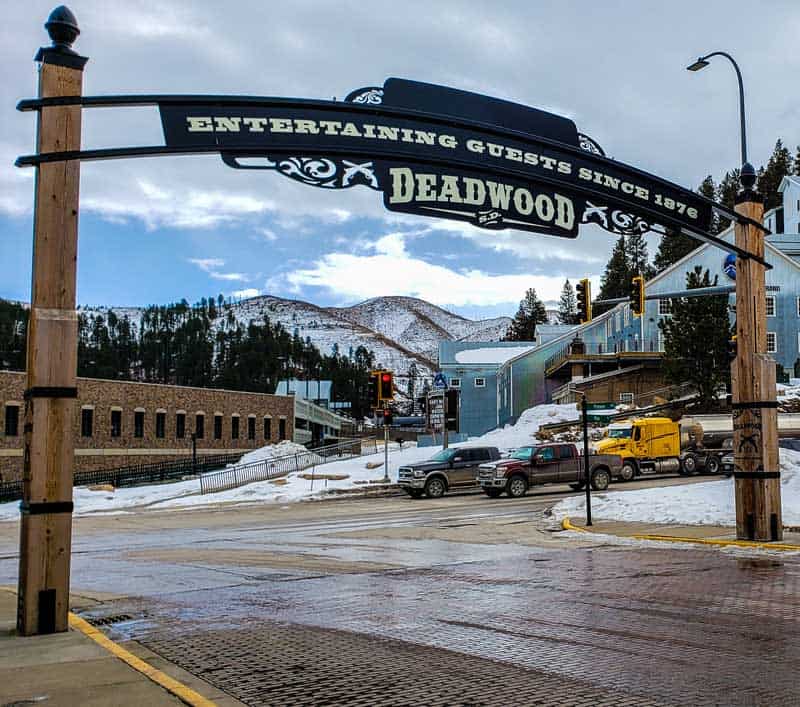 Deadwood is located in the scenic Black Hills of South Dakota. Pretty much exactly straight south of where we live in Saskatchewan, and a mere 500 mile (800 km) drive, Deadwood is a popular year-round destination for those of us who live on the prairies. Whether you trailer your snowmobile for a winter adventure, or take in the Sturgis Motorcycle rally, the scenery is perfect for a roadtrip.

So, when we decided it was time to attend another snowmobile race, just for old time’s sake, Deadwood was our event of choice.

We purchased VIP passes in advance that gave us trackside front-row seats in one of the 16 box areas, along with lots of other great perks. It included pit passes, some meal and drink discounts, and the limited edition event toques. Plus, even more important, our seats were just steps away from an outdoor event heater and the canteen with food and beer.

Racing at all ISOC Amsoil events is on Friday and Saturday, with the occasional Sunday for the season’s final race. You’ll see a mix of classes, ranging from the youngest riders (4 to 6 years old) riding 120 hp mini-snowmobiles, with a speed limit of 12 mph, to the Pro classes featuring professional teams with sponsorships from snowmobile manufacturers.

The pro drivers, however, just do practice laps during the day, with all of their heat races, and the final, on the evening program.

Getting to Deadwood’s Snocross Track 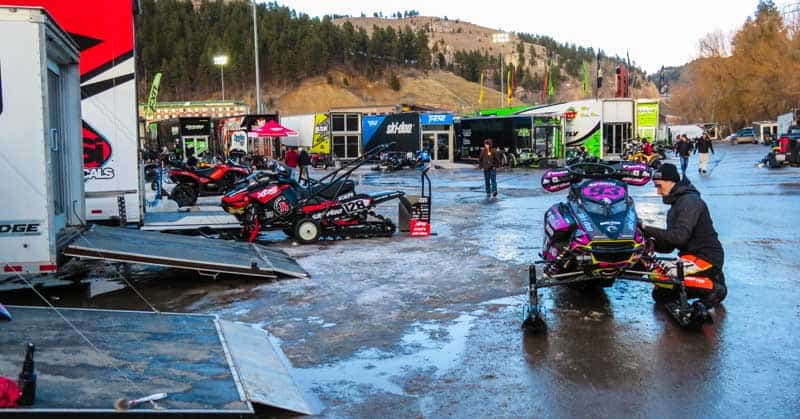 To be completely honest, we drove right past the snocross track on our way into Deadwood and never noticed it! That’s because the complex is actually part of the city, and wasn’t nearly as big as we were expecting. In fact, the only parking at the racetrack is for participants.

We soon discovered that was actually a benefit though, rather than a disadvantage. After all, what’s better than a trolley that costs a buck or two to get from one end of town to the other, when there are so many bars and casinos to spend time at in-between?

We ended up even luckier. I’d selected the Downtown at the Gold Dust boutique hotel, which provided valet parking for our car and sent their shuttle to drop us off and pick us up whenever we wanted. A weekend getaway doesn’t get much better than that.

The Thrills and Spills of Snocross Racing

The first USSA (United States Snowmobile Association) sanctioned snocross race was held in West Yellowstone in 1979. European snowmobilers had been competing on tight corners, banked turns, and short bumps since the early 1970s, so promoters soon started incorporating them into events.

By the 1983-84 snowmobile season there were snocross circuits in North America and the event was becoming more popular. In the 1997-98 season two things happened that changed the sport of snocross forever.

One thing soon became obvious. Fans, whether in-person or watching televised events, loved the sport. Unlike cross-country racing, or even ice ovals and drag racing, the thrills and spills of snocross never seem to stop. The only requirement for promoters was snow, and if it didn’t fall naturally from the skies, it could be made.

Nightlife and Adult Entertainment in Deadwood 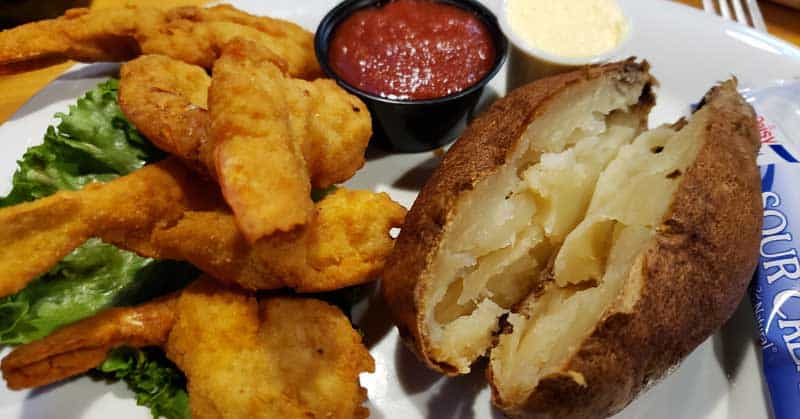 Delicious shrimp and baked potato at Mavericks Steak and Cocktails in the Gold Dust Casino in Deadwood. Photo by Linda Aksomitis.

Things are done at the racetrack by 10 pm, so there’s a lot of night left to enjoy in Deadwood once the racing is done. In the early years, Deadwood had always had a reputation for its saloons, gambling halls, and brothels. And with the gold rushes and mines that went through booms and busts, that made the town a very popular place.

That popularity continued into the 20th century, with the last four brothels shut down by federal authorities in 1980. Gambling fared better.

In 1989, the backroom gambling halls were legalized when Deadwood became the third place in the US (after Atlantic City and the state of Nevada) to allow legal gaming. In 2015, roulette and craps joined the slot machines, poker tables, and blackjack games to make the town a midwest mecca for those who wanted to try their luck.

But the good times don’t stop there. We found lots of great fine dining with everything from steakhouses to oyster bars, live music in the bars and Outlaw Square, karaoke and concerts.

Or, if you’re looking for a different kind of experience, you can take in a ghost and paranormal tour in a former 1898 Victorian Brothel at the Fairmont Hotel & Oyster Bay Bar. You’ll even find a cigar bar with legal indoor smoking at the Fairmont’s Deadwood Tobacco Co. & Cigar Bar.

History is Everywhere in Deadwood

Deadwood takes full advantage of its notorious history. Indeed, the whole town of Deadwood was declared a National Historic Landmark in 1961. Everywhere you go, you’ll find the names of infamous, whether that’s Maverick Sally’s, Legends Steakhouse, or Hickok House.

Indeed, Wild Bill Hickock is likely the most infamous outlaw to live — and die — in Deadwood. In the short space of a month, he arrived in Deadwood by wagon train and was shot down by Jack McCall in 1876. While the saloon was located further down the street at the time, Saloon No. 10 is filled with historic photos and artifacts of that time and re-enacts the events of Wild Bill’s final card game.

During the summer season you can attend a performance of the Trail of Jack McCall to learn the fully story.

While Saloon No. 10 on Main Street calls itself the “only museum in a bar,” you’ll also find more traditional museums that provide a lot of information about Deadwood’s history and gold mining in the Black Hills. We particularly enjoyed the Adams Museum and its historical coverage of the area. You’ll also find the Days of ’76 Museum has some great history, especially on the area’s relationship with Buffalo Bill Cody.

Mainly, we enjoyed just walking the streets, admiring all of the historical buildings that are still standing. It’s easy to see how the town inspired a movie called, of course, Deadwood!

Tips for Visiting Deadwood for the ISOC Snocross Race

More Places to Visit in South Dakota and Nebraska

Once you've visited the Black Hills of South Dakota the first time, you'll probably put them on your must-visit-again list! With attractions and activities that span the four seasons, there's always something new to do. We live less than 500 miles from the Black...
Read More

Read More
The photo in the header above is of Deadwood, South Dakota, USA. It was taken by Linda Aksomitis. 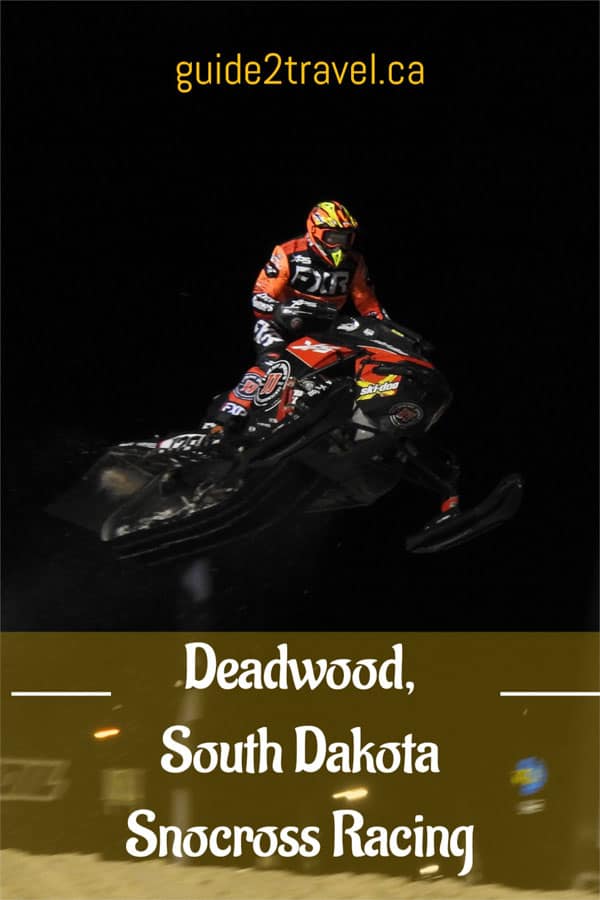 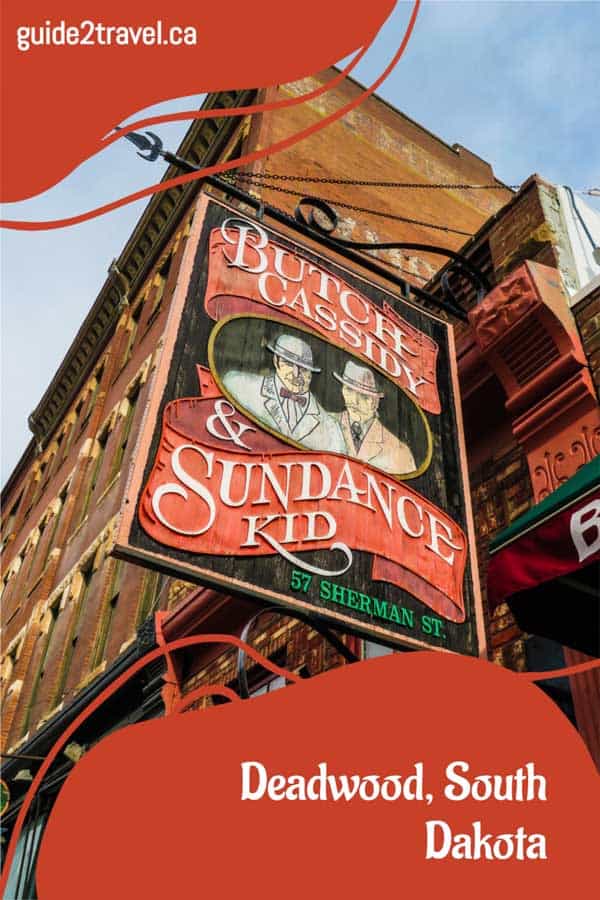 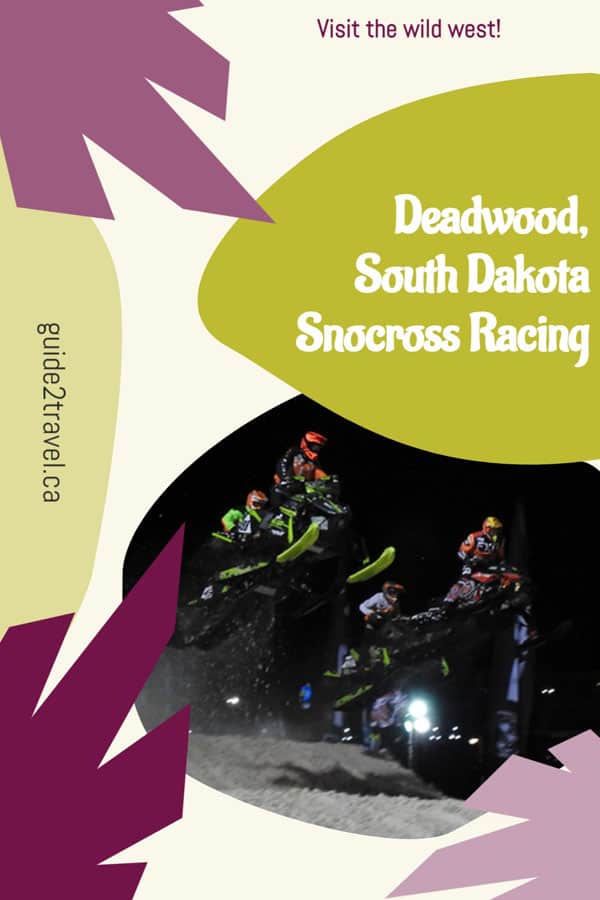 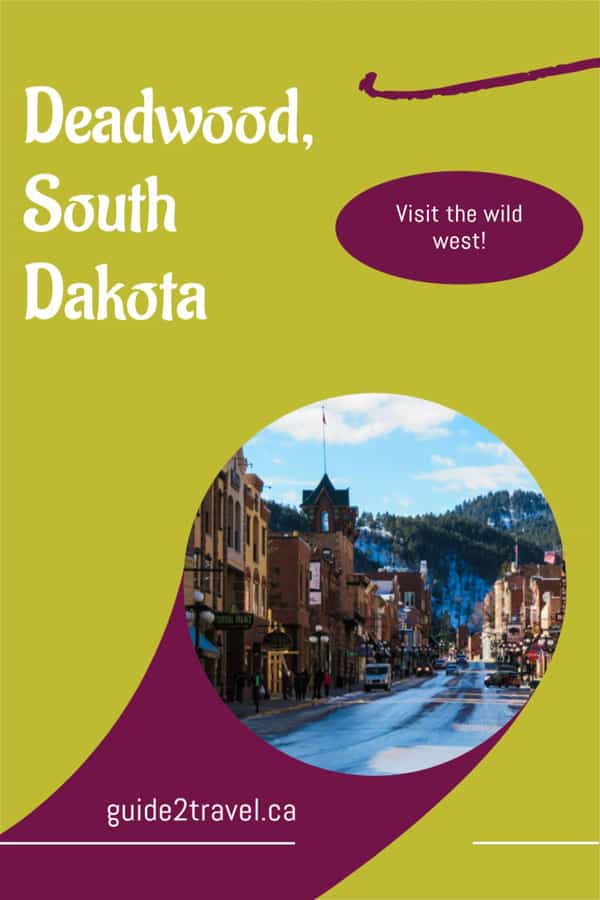